There’s a couple of examples of an interesting phenomena occurring along the campaign trail this year in the run up to the general election. in at least two instances, there are independent candidates who are not actively touting their independence, but rather doing their darnedest to try to be Republican without actually running as a Republican.

I had touched on the team up of District 35 Independent State Senate Candidate Brian Gentry, who seems to be running one of this fall’s weirdest campaigns, and defeated primary candidate/one of Pennington County’s Most Wanted, Kevin Quick early last month: 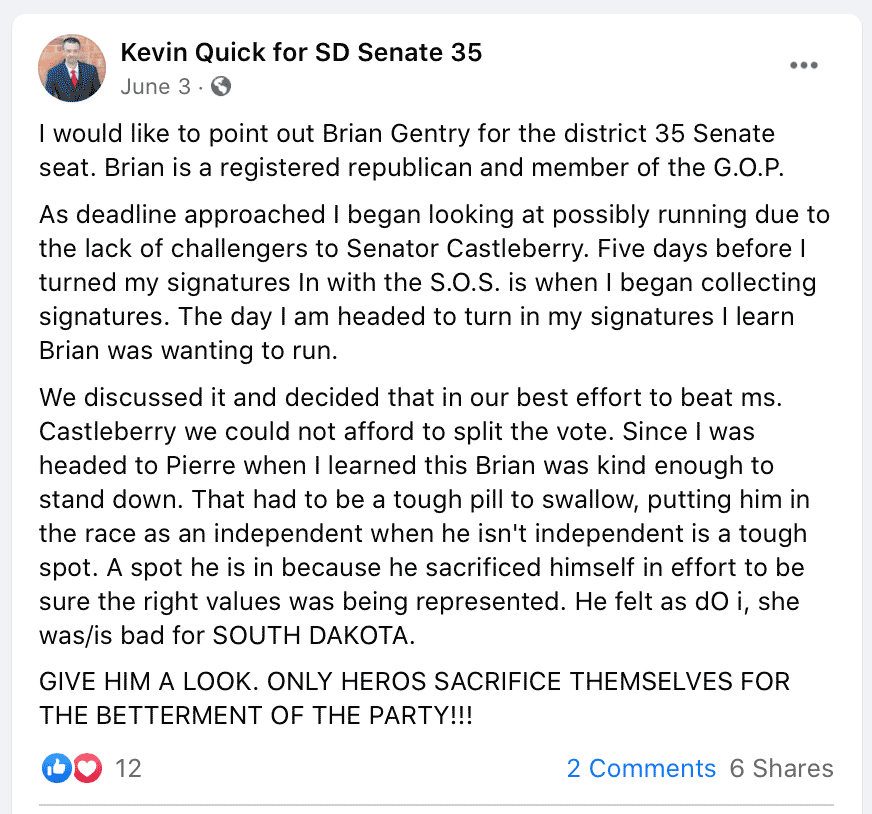 Since that July 6 post, It’s not just Quick claiming a team up. Gentry recently reiterated their scheme in an interview with South Dakota Public Broadcasting which whipsaws between a robotically read and inauthentic script, to just plain weirdness.

SDPB: “Tell a little bit about… Why Independent, for example.. Why not align with one of the political parties?”

“As you mentioned at the beginning of this call, Lynne DiSanto, Former Legislator did.. ah.. did recommend me for this position late last year.. for whatever reason.. whatever the case may have been at that point.. I was not put in at position as an appointee. So, at this point I just wanted to secure the seat. Make sure that the right person was put in there, and allow the person before me to go.. to go on through the process that she was a little further long than I was.”

“So, definitely showed some integrity there, but definitely wanted to make sure we secured the seat properly.”

Listen to the entire interview here.

Why do Gentry and Quick seem to assert some weird property right on a state legislative seat? I hate to ask, but who does Gentry consider the plural “we,” in the part where he says “to make sure we put the right person in that chair?”

Because when I checked, no one owns a legislative seat. And these two ding-dongs might want to consider that there has been one group who spoke quite definitively about who “the right person was to put in the chair:”

(From Ballotpedia.)  The Republican voters of District 35 pondered the question, and voted on nearly a 3 to 1 basis that the right person to put in the chair was current State Senator Jessica Castleberry.  That’s a pretty definitive voice speaking loudly.  Regardless of Quick or Gentry claiming some ownership right.

If you agree with the Republican Voters in District 35 that Jessica Castleberry is the right person to put in that chair, I’d encourage you to go over to Jessica’s website and support her candidacy.