So, the KELOland GM tweets this out a few minutes ago: 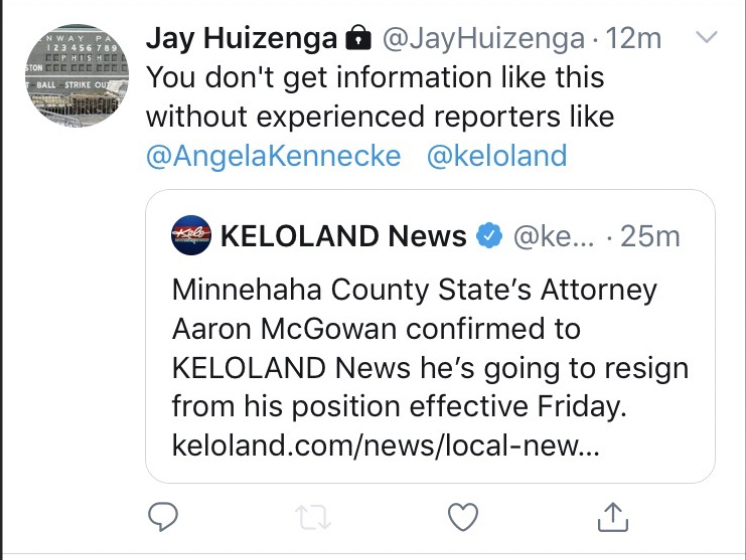 Did he miss the part where the Argus Leader (via Jon Ellis & Joe Sneve) broke the story on August 30…:

Sioux Falls police were called to the home of Minnehaha County’s top prosecutor in an incident that preceded his weeks-long absence from office, but no records of the call were made public.

State’s Attorney Aaron McGowan has been out of office since mid-July, officially citing “medical reasons” for his absence. But an Argus Leader investigation determined that McGowan disappeared from the public eye after several police officers responded to his south Sioux Falls home on July 13.

And don’t forget the Argus’ story earned them attacks and blacklisting by McGowan:

“I’m sure that Mr. Ellis’s unnamed sources can confirm that I’m back to work, without an official comment from me.  I will be addressing the false accusations against the SFPD and the inaccurate reporting by your paper in the near future.  I will do so with reputable media outlets that have journalistic integrity and don’t unnecessarily attack people for headlines and profit.”

…which was followed up by McGowan conducting a puff piece with KELOland in the middle of September.

If the KELO GM is referring to the resignation story – which the Argus filed first today – even that refers back to the Argus’ pursuit of the original story:

He said in his email, “The negative print media has been too much of a distraction for me to continue with my responsibilities as State’s Attorney.”

KELOLAND News reached out to the Argus Leader newspaper for a response to McGowan’s comments.

“It’s our duty to hold elected officials to account for their actions, or inactions, because if we don’t do it nobody else will. That includes Aaron McGowan.”
Cory Myers, news director

It’s great that the KELO GM is supporting his team. But let’s not kid ourselves, and give credit where credit is due.