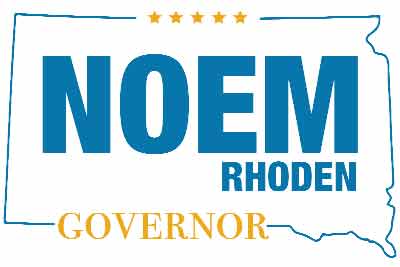 “He’s South Dakota’s version of President Joe Biden,” the “C’mon Man” ad states. It notifies viewers of Rep. Smith’s “F” rating from the NRA and his vote to allow boys to play in girls’ sports. The ad directs viewers to JamieandJoe.com, a website that shows how closely Representative Jamie Smith aligns with President Joe Biden and how out of touch he is with South Dakota values.

“Governor Noem and I will never stop defending our state and your Freedoms,” Lt. Gov. Larry Rhoden promises in the “On All Fronts ad. “When they tried to shut down small businesses, we stayed open, and our economy thrived. When they tried to put boys in girls’ sports, we passed the strongest law in the nation to stop it. And when they came after our kids with Critical Race Theory, we blocked their propaganda.”

Under Governor Noem’s unwavering conservative leadership, South Dakota is thriving. Because of the Governor’s refusal to accept one-size-fits-all, big government overreach, South Dakota has the number one economy in the nation, leads the nation in personal income growth, ranks number for new housing development, and our schoolchildren lead the nation in educational outcomes.

“South Dakotans deserve strong, principled leadership like Governor Noem and Lt. Gov. Larry Rhoden,” said Ian Fury, Communications Director at Kristi for Governor. “Jamie Smith is lying about his record because it doesn’t match the values of South Dakotans. Governor Noem will always shoot straight with voters and be clear about what she believes.”