Is he kidding?  Aaron McGowan, Minnehaha County State’s Attorney, has issued a response to the damning DCI Investigation & AG’s Report on the legalities of removing him from office, despite the Governor’s report of behavior which she termed as “unsettling.”  And it does little more than ignore the elephant in the room.

From the response to the report, as noted in the Argus Leader:

McGOWAN TO KEEP WORKING FULL-STEAM AHEAD

Aaron received a copy of the public report from the media and disagrees with several portions of the report, which are largely taken out of context or based upon unnamed sources of information.

Aaron will not be doing any further interviews or commenting further on this matter.  McGowan will continue his responsibilities to serve as the Minnehaha County State’s Attorney.

Aaron would further like to apologize to his staff for this distraction.

Aaron is talking a lot in the third person in this press release. Aside from the fact that McGowan’s statement implies move along, nothing to see here, and tries to portray the report as having been “taken out of context or based upon unnamed sources of information.”

Unnamed? Really? Because what was in the report were the facts that people currently and formerly working in that office actually went on the record to Division of Criminal investigators. Employees who directly brought up a booze soaked office culture, including a former female employee who had to endure a drinking session at her home with the boss. 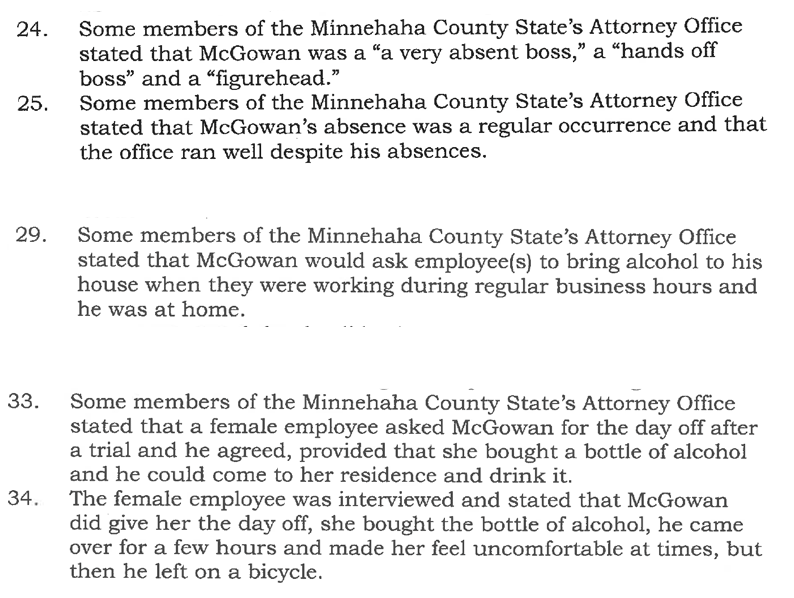 Think this is the last we’re hearing about this? I really don’t think so. The people making those statements might have been unnamed in the report delivered to the governor and made public, but they clearly went on the record with state criminal investigators.

To try to pooh-pooh that in a press release with the laughable headline of “McGOWAN TO KEEP WORKING FULL-STEAM AHEAD” declares that he’s oblivious to what got him here in the first place.

And just does the voters a ridiculous disservice.

27 Replies to “McGowan declares he’s going to “KEEP WORKING FULL-STEAM AHEAD,” despite damning DCI Investigation & AG’s Report that the opposite was happening”