Did anyone else read the venomous response by Minnehaha County’s top prosecutor to the Argus Leader when they tried to find out why police were called to the house?

Because the circumstances surrounding his 2-month absence continue to be held under an absolute iron veil of secrets:

McGowan had been absent from work following police activity at his home in south central Sioux Falls on July 13, which started with a 911 call from his home. No information about the nature of the call was made public, and the call to McGowan’s home was not broadcast on the police scanner as calls typically are dispatched to responding agencies.

Metro Communications, which takes 911 calls and dispatches police, fire and other emergency agencies in Sioux Falls and Minnehaha County, declined to release audio from the call that prompted the police response. That decision prompted Rep. Jon Hansen, R-Dell Rapids, to call for its release on Twitter.

“I’m sure that Mr. Ellis’s unnamed sources can confirm that I’m back to work, without an official comment from me.  I will be addressing the false accusations against the SFPD and the inaccurate reporting by your paper in the near future.  I will do so with reputable media outlets that have journalistic integrity and don’t unnecessarily attack people for headlines and profit.” 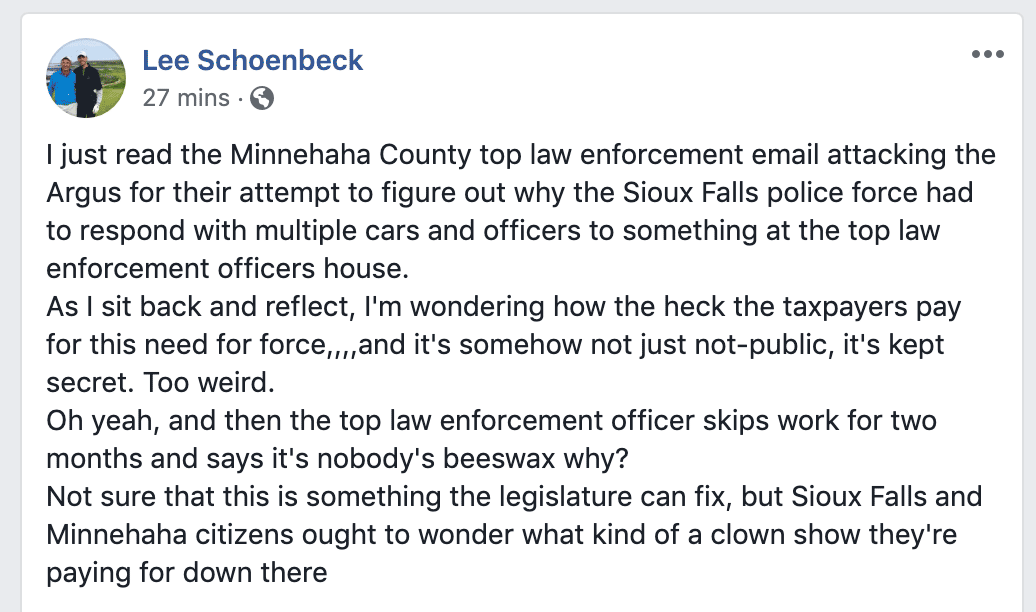 And they’re right.  Taxpayer dollars are being used to respond to *something* going on at an elected official’s private residence. And when people inquire, a brick wall of silence has been engaged.  The elected official’s response to the news outlet who pursued the story? Yelling “fake news” and declaring the official equivalent of an amish shunning in retaliation.

It sounds as if there’s far more to the story. Which no one is talking about.

Do NOT follow this link or you will be banned from the site!