In February of 2009, writing on his blogspot website, Neal Tapio offered his following thoughts on racial profiling: 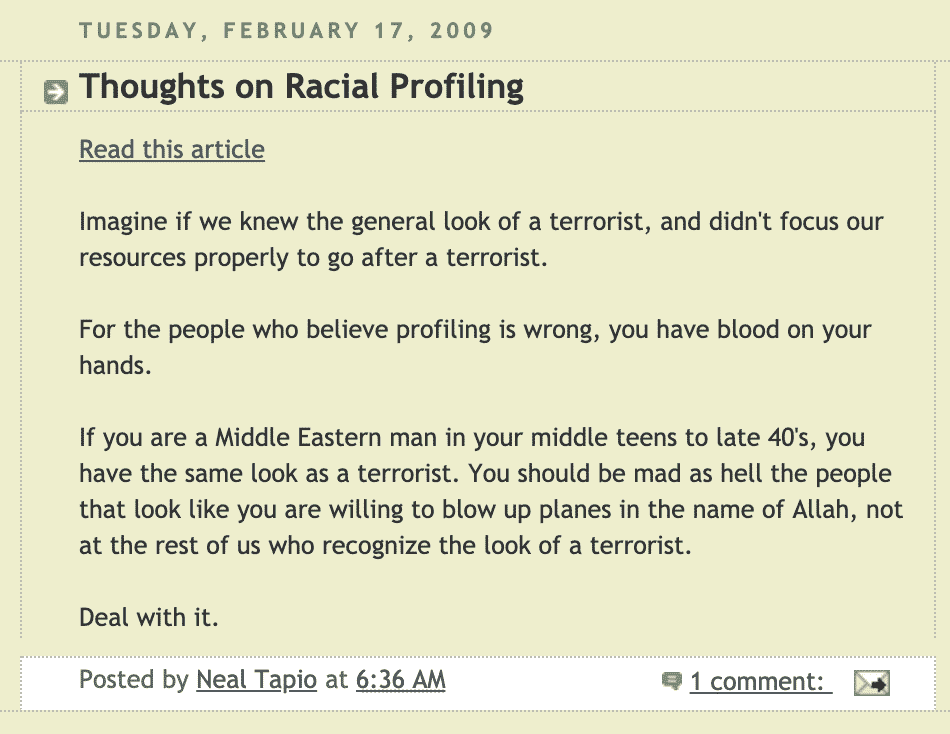 If you are a Middle Eastern man in your middle teens to late 40’s, you have the same look as a terrorist. You should be mad as hell the people that look like you are willing to blow up planes in the name of Allah, not at the rest of us who recognize the look of a terrorist.

In 2009 Neal Tapio declared that if you looked like you have “Middle Eastern” ancestry, “you have the same look as a terrorist” and that they can just “deal with it.”  And “for the people who believe profiling is wrong, you have blood on your hands.”

And a decade later that rhetoric has not changed.

In 2018, after expressing his intention to get into the race for US Congress, Tapio found himself in front of an interfaith group at the capitol in Pierre who prayed for tolerance and religious acceptance:

Members of the group invited Tapio to join them for a group photo. Tapio, looking uncomfortable, stood with them as cameras clicked and flashed.

Then he turned his back to the cameras and began yelling at those around him, “I don’t like being called a racist.”

The former state director for President Donald Trump then launched into a speech he’s frequently made before. He stressed the need to ban travel to the United States by Muslim individuals, particularly from Muslim-majority countries where groups have supported Sharia law.

I can’t imagine why he might think they consider him racist.  Nor can I see that there’s a groundswell to hear it all over again.

Last election, the rhetoric included Tapio going so far as to intimate that an Islamic terrorist attack prior to the June South Dakota primary would “assist his candidacy.”  In a recording, he said, “And then all that has to happen is that there will be one more terrorist attack between now and then and I will be the, just by the Trump effect, I will be the candidate. That’s the way I look at it.”

While there wasn’t an attack, raising the specter of Islamic terrorism didn’t propel his campaign forward either.

After the 2018 Republican Congressional Primary had Tapio coming in third, defeated about 2-1 by now incumbent Congressman Dusty Johnson, it seemed that we might be done with Tapio’s apparent war with people who might worship God differently or look differently than he does.

But after a year where we didn’t hear much about it, Neal came out of the woodwork, and expressed he may get into the race.   He even put Republicans on notice that he may skip the primary.   In recent weeks Tapio has engaged the services of a person doing exploratory work for him.

And as opposed to trying something new, he appears to be preparing his entry into the race with a near-constant stream of anti-foreigner rhetoric, via facebook.

It’s like deja-vu all over again.  The same rhetoric Neal ran unsuccessfully on in 2018 when there was an open seat is being recycled for a new campaign against the now incumbent who cleaned his clock in the primary.  An incumbent popular with state residents, I might add.

I’m not sure why Neal thinks that a new campaign based on his same tired platform of refugees, racial profiling, and islamophobia will create a groundswell that’s going to carry him over Dusty Johnson in June or November.   Is this the kind of thing that South Dakotans want to hear after it was rejected once already? I find that highly doubtful.

The Tapio campaign is already recycling the same-old rhetoric in the same narcissistic manner, where the campaign isn’t about what South Dakotans need, or what state residents want.  It’s all about the things that Neal has been talking about for more than a decade.

His campaign against those following a different religion didn’t work in 2018.  And I really doubt it’s going to get any farther now in 2020.

32 Replies to “Neal Tapio’s march towards a new campaign of refugees, racial profiling, and islamophobia. Is anyone really looking to hear it all over again?”