Skip to content
Latest News
South Dakota College Republicans elect new leadership for 2021-2022
Anti-Thune Candidate Mowry declares to Anti-Thune group that “We are not a fringe group” And then they demonstrate it.
Congressman Dusty Johnson’s Weekly Column: Keep the Nine

Are you familiar with Lincoln Day Dinners usually held about this time of year? Well, Democrats have their own version as well:

Jefferson–Jackson Day is the annual fundraising celebration (dinner) held by Democratic Party organizations in the United States.[1] It is named for Presidents Thomas Jefferson and Andrew Jackson, which the party calls its founders. During presidential election campaigns, key dinners are important venues for candidates to attend.

It is usually held in February or March around the same time as the Republican Party’s equivalent Lincoln Day, Reagan Day, or Lincoln–Reagan Day dinners.

Which is why it struck me as really odd when I recieved this notice in my e-mail box: 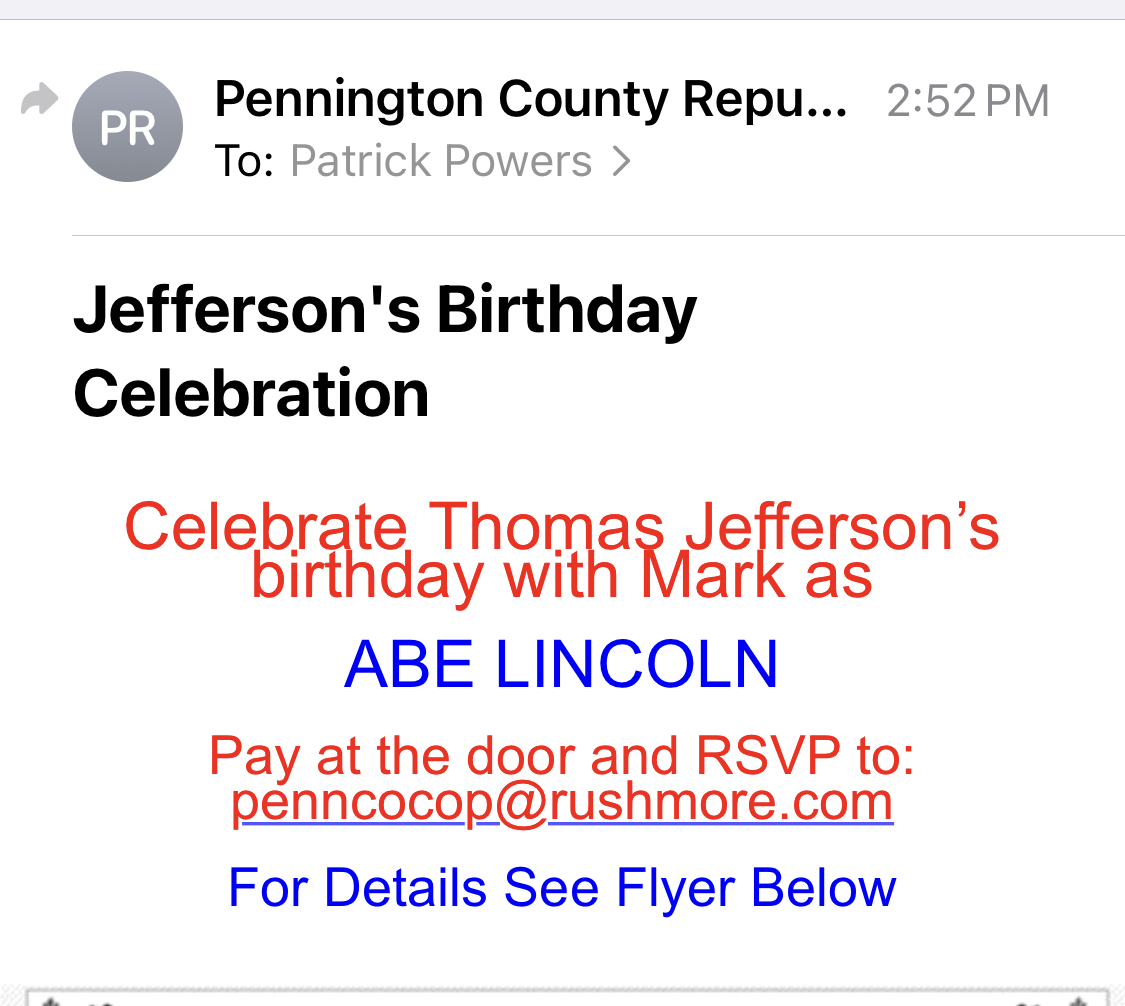 Apparently the founder of the Democrat Party brought baked chicken & caprese skewers to the United States.

Nothing against the author of the Declaration of Independence. But if I’m going to a Republican event in April, I’d stick with a Lincoln Day Dinner theme if it was me.

Ed Randazzo with the Penn Co GOP was quick to disavow the event and note ..” This Jefferson Birthday event is the brain child of Mark Skogerboe. Mark, who calls himself the Freedom Poet, has spent the last year or so impersonating Abe Lincoln at various events and I guess he’s tired of being Abe. The Jefferson event is not sponsored by the Pennington County Republican Party.”

But, I can’t help but wonder why it was kicked to my e-mail by the Pennington County GOP’s list serv, and the message says “Celebrate Thomas Jefferson’s birthday with Mark as ABE LINCOLN And I can “Pay at the door and RSVP to: [email protected]”

At the very least, it might cause someone to make assumptions.