In the article last night from Dakota News Now, it was noted that “In recent weeks, Howard has begun to appeal to the more conservative faction of Republicans in the state” in an effort to gain traction prior to an announcement for Congress.  But it wasn’t always so. Because there once was a time where Taffy Howard was eager to express her full-throated support to what some may term “the political establishment.”

It appears that ever since Howard was elected and started serving in the State House in 2017, she has moved away from the Republicans whom Howard had previously embraced openly and publicly, and found a home alongside members of the legislature who tack as hard as they can to the right.

But don’t take my word that Taffy had previously been all-in for the political establishment.  Because you can read Howard’s own words as they appeared in print at various times in the Rapid City Journal: 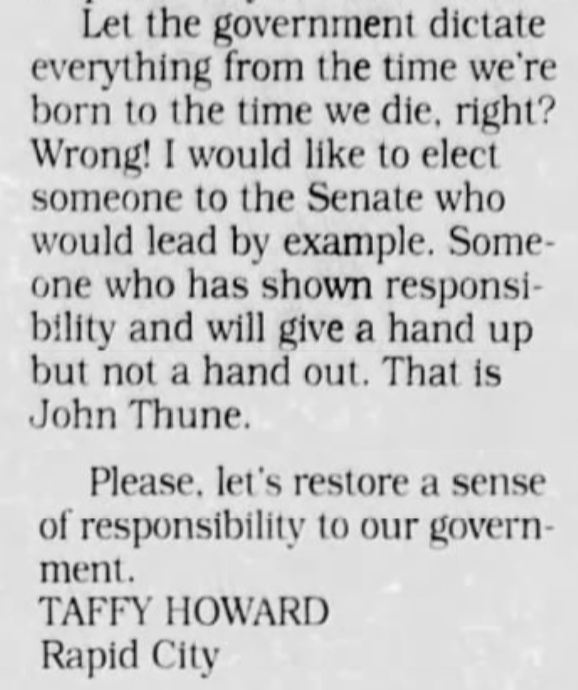 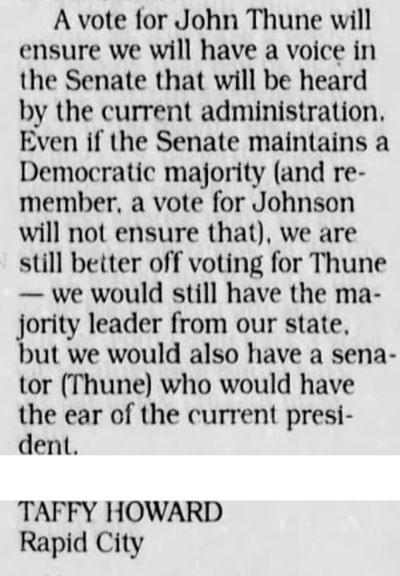 However, after her election to the State House, Howard had stopped writing gushing letters about candidates and started attacking officeholders, including Governor Daugaard, and especially Governor Kristi Noem.

Governor Noem has been a particular target for Taffy’s firebrand practices in the political arena, as Howard has taken several hits at the Governor regarding security expenses for protecting the Governor, on the transgendered athlete ban issue, which found Taffy declaring that “sometimes litigation is necessary,” over the Governor’s more measured approach, and filing an unsuccessful lawsuit to block Noem’s 2019 initiative to expand broadband internet into rural South Dakota.

Given the number of attacks and level of her rhetoric against the popular Republican Governor, one would expect that Howard would be taking Noem on in a primary for Governor.

BUT, having seen Noem’s popularity skyrocket among South Dakota Republicans and Kristi hitting the national stage, despite her constant criticism of the Governor and apparent ambition, Representative Howard knows that taking Noem on would be a losing battle, so she’s selected what she thinks is an easier target in Dusty Johnson.

However (as noted in a previous post) whether Dusty Johnson can be overcome in connection with Howard’s desire to move up the political ladder remains to be seen.