Have you ever just spaced off getting a report in on time? I think most people have.

In politics, it happens to candidates and committees where a campaign finance report is due to the Secretary of State’s office.. and it just doesn’t get there on time.  Most people look at it as an oops, take their lumps and move on.

A number of years back when Chris Nelson was Secretary of State, I was filing for a committee I had, and for some reason I was off by a day on when it was due. (Dammit.) If I recall, that was a $50 fine I had to pay for the day I was off, and I moved on a little wiser (and lighter in the wallet) for the lesson.

Since then, the fines have gotten a little smaller, but the teeth for enforcement have gotten a whole lot sharper.  So, what happens when a candidate intentionally ignores the campaign finance disclosure required by law?

This all comes up, as I was perusing the Internet a couple weeks back to see what might be amusing to write about I stumbled across a tiktok video from former Libertarian State Senate Candidate Carl Abernathey complaining about a letter he’d received about a fine from the State, lamenting that the state says he owes $240 for running for State Senate.. while holding a letter which appeared to be from the state’s Obligation Recovery Center. 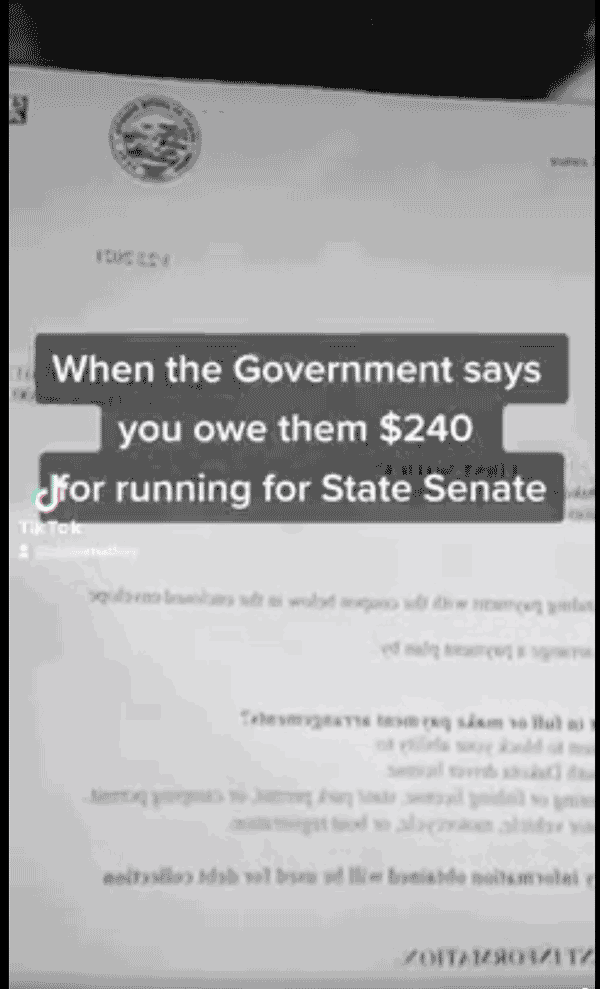 This was the first time I’d actually heard of a legislative candidate ignoring all those statutory deadlines and notices to the extent that they had to be referred to the state’s collection agency for the fines and penalties accrued for not following state law. All over failing to file a couple of pieces of paper.

In the campaign finance record, there wasn’t anything more than a statement of organization for Abernathey’s campaign, as well as a a one page December notice of termination which was also a letter of violation of filing.

I reached out to the Secretary of State’s office for any additional public documents and information on the referral to the state’s obligation recovery center. The SOS provided additional documentation, and noted that “The attached documents will answer your questions.”  And they certainly did.

What the documents tell us is that the State of South Dakota exercised the rarely used teeth in the laws under 12-27-29.1 and 12-27-29..4, where after failing to file the Campaign Finance report for his general election activity as required by law, the Secretary of State sent Abernathey a notice of violation and order for a civil penalty of $200, as well as giving Abernathey the option for a contested case hearing with the office of hearing examiners.

That was followed up by the December 23 letter terminating the committee, and giving further notice under SDCL 12-27-29.2.

And it continued on with yet another, and final notice where on January 22 of this year Abernathey was noticed that fine needed to be paid within 14 days, or as the letter states:

What happens if I do not pay the debt in full or make payment arrangements within 14 days?

• We will refer your account to the South Dakota Obligation Recovery Center for collection purposes.
• A cost recovery fee in the amount of $40.00 will be added to the amount due.

And that’s exactly what appears to have happened, noting the former Libertarian Candidate’s ill-directed complaint over it costing him $240 to run for office.

Can the former candidate keep ignoring things?  He can, but I’m not sure he’s going to like the results.

Abernathey’s new problem is that while he might have ignored the notices from the Secretary of State, under law, the State’s Obligation Recovery Center has far bigger hammers they can use than just a $240 fine:

No person that owes a debt that is referred to the center may renew, obtain, or maintain:

unless the debt and cost recovery fee is either paid in full or the debtor has entered into a payment plan with the center and payment pursuant to the plan is current.

In addition to the Secretary of State’s admonishment (in their 1/22 letter) under 12-27-29.3 that they won’t certify Abernathey as a candidate again until his fines are paid, the Obligation Recovery Center adds that the state may refuse to renew, refuse to allow him to obtain or refuse to allow him to maintain his vehicle registrations, any driver’s license, and any hunting license, fishing license, state park permit or camping permit.

If you think the state would not use those hammers on those who owe it money, guess again:

“They told me that If I didn’t pay the bill, they would take my [driver’s] license away,” she said. “I told them, ‘Go ahead, I don’t drive anymore.’”

As a result, her driving privileges have been suspended since 2017.

The ORC cannot negotiate with debtors who have been ordered by South Dakota courts to pay restitution, fines or court fees, which can make collections on those debts more difficult, Bollinger said. Court-ordered debts also cannot legally be written off, unlike most other debts.

Ultimately, for a campaign finance violation, that just seems like a lot more headache than paying a $200, now $240 penalty is.

2 thoughts on “So what can the state do when you don’t file that campaign finance report?  Actually, quite a lot.”