Skip to content
Latest News
Senator Thune speaks truth to power, noting “If getting primaried is the price for standing up, and speaking the truth, and standing up for the rule of law and the Constitution, then so be it,”
SD Woki-leaks quoting USD Prof: “some very active legislators” .. “follow an evil agenda of advancing their racism”
COVID Update: Talking about the COVID long haul.. and what’s with the peanut butter craving?

Insert eye roll here. Because three House members have banded together to declare themselves the holiest of holies, and introduce a resolution declaring that “there is no higher honor than that which comes from raising one’s right hand and solemnly swearing to faithfully discharge the duties of the office to which one has been elected.“ 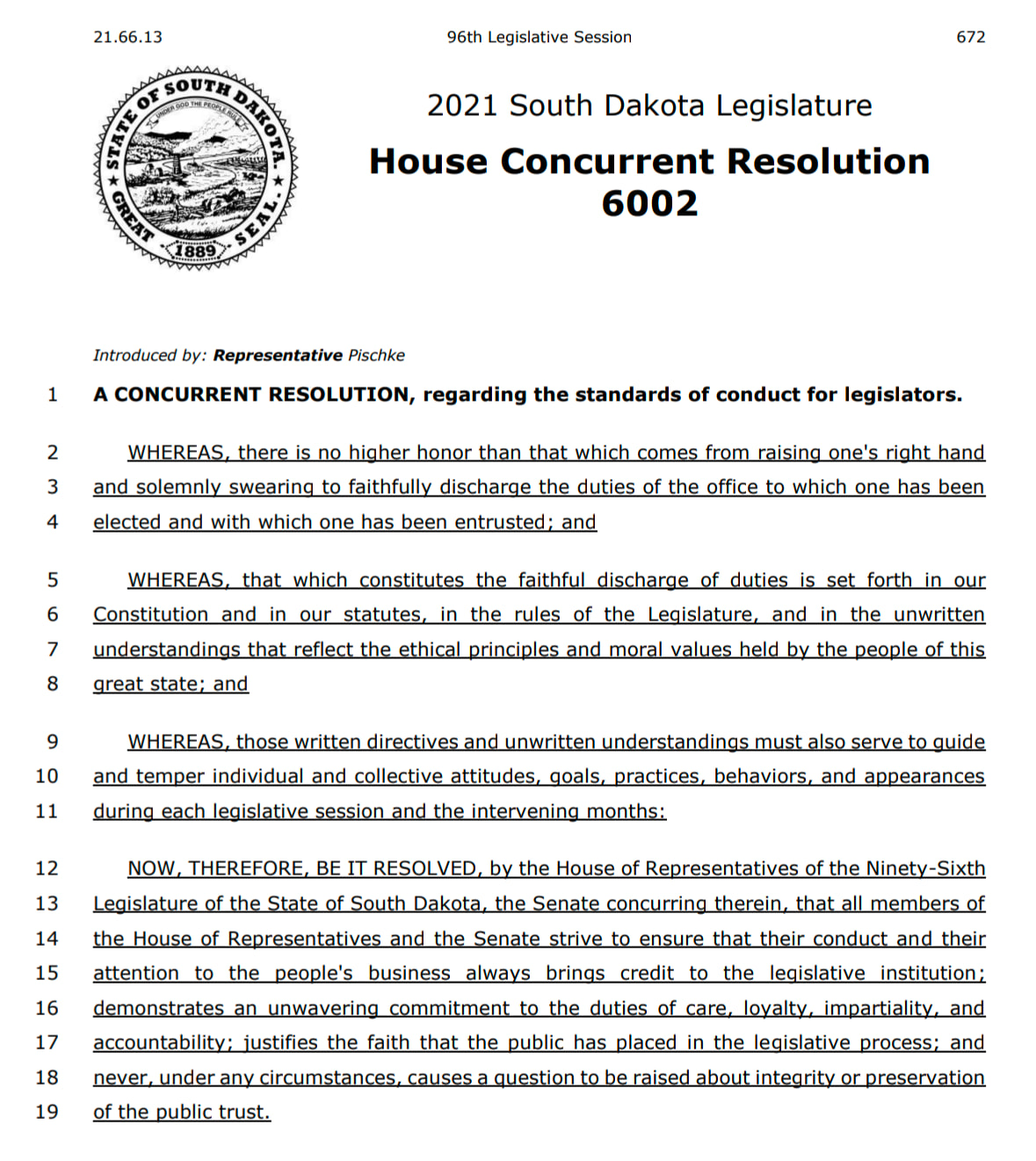 Pardon me, but what a crock of shit.

I do a lot of work with people running for office, and find most of them to be really good people. Just top shelf, because they’re in it to be public servants. Not because they feel that by their selection at the ballot box, they have been anointed by the lord. That’s why the language in this measure is really kind of offensive.

I think a number of us would place members of the military and other public servants such as law enforcement higher on the pecking order over those serving in elected office. And I think a lot of elected officials would agree. Not that legislators are bad people by any means, but when you’re passing a resolution to declare yourself to be more awesome than health care providers who are exposing themselves to a pandemic that’s actually killing people, it falls a little flat.

Representatives Tom Pischke, Aaron Aylward, and Phil Jensen have put their names to a measure where there’s a lot of self-glorification going on. And they should withdraw this self-serving tripe before they embarrass themselves any further.

Of course, the measure doesn’t end at naked egotism and self-conceit as they honor themselves. It also engages in holier-than-thou declarations “that all members of the House of Representatives and the Senate strive to ensure that their conduct and their attention to the people’s business always brings credit to the legislative institution.”

That sounds like a phrase that someone is going to throw back at them later. Did Phil Jensen show his good conduct as an example before or after his declarations about people’s race and the shape of their skulls?  And there are some who think that Tom Pischke’s time in the legislature was less about the people’s business as opposed to less noble pursuits as well.

Ugh. This legislative session is challenging enough without some of the people we’ve sent to Pierre passing resolutions to massage their own egos.

12 thoughts on “Three State Legislators declare that there is no higher honor than being an elected official. Really.”