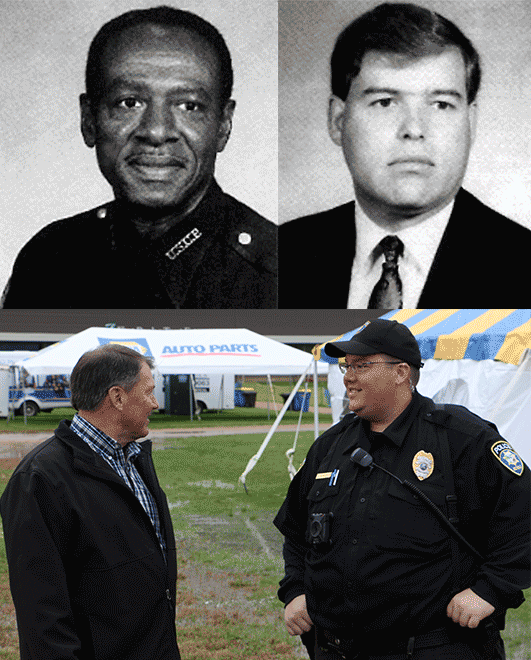 Jacob Chestnut. John Gibson. They’re not household names instantly recognizable. They were sons, husbands and fathers. They were two regular people, just like the rest of us, except they possessed a little bit more courage. Their stories weren’t known until July 24, 1998. On that fateful day, a lone gunman walked into the U.S. Capitol in Washington, D.C. He shot and killed the first person he encountered, Officer Chestnut, operating the X-Ray machine at an entrance. Quickly, the gunman then found Detective Gibson who heard the previous gunshots and was helping others find safety. Even after being mortally wounded, Detective Gibson was still able to return fire and wound the gunman just enough to stop him from inflicting any more harm.

Our nation mourned this senseless loss of life. Congress saluted these two officers by making them the first people to ever ‘lie in honor’ in our nation’s Capitol. Prior to this, Presidents and Members of Congress were recognized after death by ‘lying in state’ at the Capitol Rotunda. This new distinction, lying in honor, bestowed upon the officers has only since been granted to Rosa Parks and the Rev. Billy Graham. The officers were buried in Arlington National Cemetery. Our country honored these two fallen officers and remembered them exactly as they were: heroes who risked their lives to protect others.

Right now, there’s a growing hostility toward law enforcement in this country. This past week, we watched videos showing two officers sitting parked in their squad car being ambushed at pointblank range in California. The hatred needs to stop. It’s simply un-American.

This aggression was seeded in the Defund the Police movement. Following the death of George Floyd, riots broke out in Minneapolis. Peaceful well-meaning protests turned violent and chaos has spread across the country from Kenosha to Portland. Law-abiding citizens feel unsafe and are fleeing to new communities and states that understand the link between liberty and security.

It goes without saying that here in South Dakota, we’ve got it pretty good. We are patriots who love our country and want to see it succeed. And we don’t understand how local leaders could stand by and watch their communities burn.

Our law enforcement community is not perfect. Like all professions, we’ve witnessed examples of bad apples in police departments. But let’s be clear, those bad apples have not spoiled the entire bunch. Police forces in South Dakota and across our country are filled with brave men and women who put their lives on the line, day in and day out, to make sure our communities stay safe. Police officers are public servants. Police officers are not public enemies; they fight the enemies.

That’s why, in June, when many spewed hatred toward our law enforcement community, Senate Republicans joined together and proposed commonsense legislation, called the Justice Act, which made significant, meaningful reforms to police departments. Unfortunately, National Democrats saw the chaos unfolding in our country as a winning issue heading into the November election, suggesting that our proposal did not go far enough to penalize police officers. They put partisan politics ahead of protecting people and blocked our bill from moving forward.

While our efforts may have stalled, there’s still significant work to be done. This week, in light of the recent surge of attacks on officers, my colleagues and I introduced legislation making it a federal crime to knowingly cause, or attempt to cause, serious bodily injury to a law enforcement officer. If convicted, the criminals could face up to 10 years imprisonment, or a life sentence if the offense includes attempted murder, kidnapping, attempted kidnapping or if a death results. Last week, we also sent a letter to Attorney General Barr asking him to consider whether the Department of Justice needs additional authorities, resources or tools to protect our officers. If so, we stand ready and willing to assist.

Having a legitimate discussion about improving policing policies is one thing. Attempting to defund the police is entirely different. Defunding the police can only lead to one thing and that’s anarchy – just look at Portland, Kenosha or Minneapolis. These cities should learn a lesson from South Dakota and back the blue.

3 thoughts on “US Senator Mike Rounds: Backing the Blue”