Have you had a chance to review your legislator’s “FreedomScore” lately? I had a legislator reach out to me today, asking me to review something I’ve seen mentioned across my facebook feed a couple times in recent weeks.

“I have never seen such a thorough analysis of SD legislator voting records. Deserves credible review. Note the tabs at the bottom. By Lucas Kobat of Watertown”

Well, I’ve seen it, but I didn’t go into it and dig around because I suspected how it was going to come out. So, over my lunch hour, I went and took a moment. And once again, my biases were confirmed. 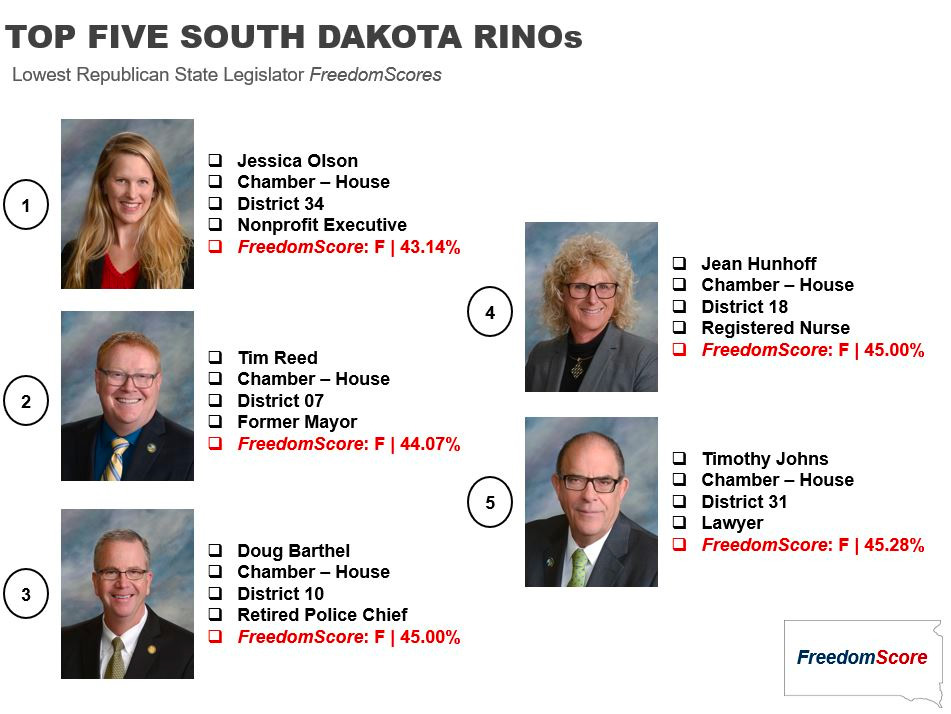 To debut my work, I’ve shown the Top 5 SD RINOs below. A RINO is a Republican In Name Only; someone who LIES TO YOUR FACE through a grinning facade…and then proceeds to stab you in the back. If you hold conservative values, these people are not our allies. They are NOT our friends.

Does the scorecard deserve a credible review? Well, I reviewed it. And my correspondent and I might have to agree to disagree.  I don’t see this new scorecard as any different than the Citizens for Liberty group picking and choosing bills to score on their scorecard because they want to highlight the people they like.  Just like the yutzes at CFL, the FreedomScore scorecard is one person framing votes after providing no advocacy on the issues they’re calling conservative or liberal.

It just comes down to personal biases.

The author Lucas Kobat claims in the facebook group he’s created that “this classification was guided by conservative principles found in documents like the US and SD constitutions, the Declaration of Independence, the Ten Commandments, and the Bible.”

So.. it might help if someone might explain to me.. which commandments are the liberal ones and which are the conservative ones?  Same goes with the Constitution. Are parts of the bill of rights good, and others bad?  I’d like someone to explain to me where in the bible does it say that 2019’s HB1232 was a conservative versus liberal issue, as in the “FreedomScore Bill List tab” Kobat termed it the “Give up on truant students” bill, as he claims the proper vote was no.

Considering the bill to lower the compulsory age for school attendance was brought by Representatives Greenfield (Lana), Brunner, Dennert, Glanzer, Marty, and Wiese and Senators Greenfield (Brock), Cronin, Langer, Maher, and Stalzer, I don’t think they’re what you’d classify as liberals. In fact, I doubt any of them would say that the proper vote was no.

Never mind the fact that the truancy issue in this instance is more of a matter of who gets the bill to deal with them – Keeping them in school until a higher age means that schools are stuck dealing with kids who cause trouble and don’t want to be in class until they’re 18, and a lower age means that bad kids are dealt with by court services.

Is either answer a conservative or liberal answer? Not really. Both options stink. All you’re doing is picking which bucket it comes from via different levels of government.  But, that doesn’t mean that legislators should be dinged as liberals for discussing it.

We also have the example with Mr. Kobat claiming that 2019’s SB 140 is a measure to “Give unequal advantages to native american students,” as he claims.  What was the actual purpose of that bill? According to the measure  – which was signed by Governor Kristi Noem – it was actually a bill to “develop programs to increase enrollment and improve retention and student supports for any student who is a member of one of the nine federally recognized tribes in South Dakota at state institutions.”

Is the legislature telling a branch of government to develop programs to try to “increase enrollment and improve retention” for a socioeconomic group of students that matriculates the fewest of the state’s students to college somehow giving Native American students unequal advantage?  Or is it actually doing what we expect government to do – identify problems and try to address them?  After some amending, it passed 52-12 in the house, and 32-0 in the Senate. Does that mean he thinks the Senate is packed with a bunch of RINOs?

Take another bill used in the score – 2019’s SB 4, to “revise certain provisions regarding the classification of agricultural land for property tax purposes.”  While only two in the legislature opposed it (Senators Cronin & Soholt in the Senate, none in the house) in the measure’s entire run, Kobat claims that the proper vote was to vote no and be against the bill he claimed would “Grant ivory tower university elitists the power to determine soil value.”

While some will look at the scores and like or hate the same people, when you dig into the basis for his scoring, it rapidly falls apart, and the cherry picking is strongly evident.

I couldn’t help it, but as Mr. Kobat started out his crusade by calling others a “Republican In Name Only,” I had to look what his registration actually is.

And I quickly found and have to point out that many of those he’s calling names successfully ran in and all were able to vote in the Republican Primary a couple of months ago. But unlike these legislators, our RINO caller would not seem to be able to do that very thing himself. Because the only Lucas Kobat I find in the voter database is registered as an Independent.

So, an Indy is telling everyone how to be a good Republican? I think Lora Hubbel was doing that for a while. Pardon me if I don’t put much stock in that.  If Mr. Kobat is going to claim to be an authority on who is a good or bad Republican, and call officeholders RINO’s.. he might start by actually registering as Republican.

Otherwise, it might seem as if the author “LIES TO YOUR FACE through a grinning facade.”  Or so, as he might say.

Update – Good catch by another legislator:

Did you notice that the district map that the freedoms score project used is not even close to correct? If they can’t even get that right why should we trust them to even begin to comprehend what went into the votes? 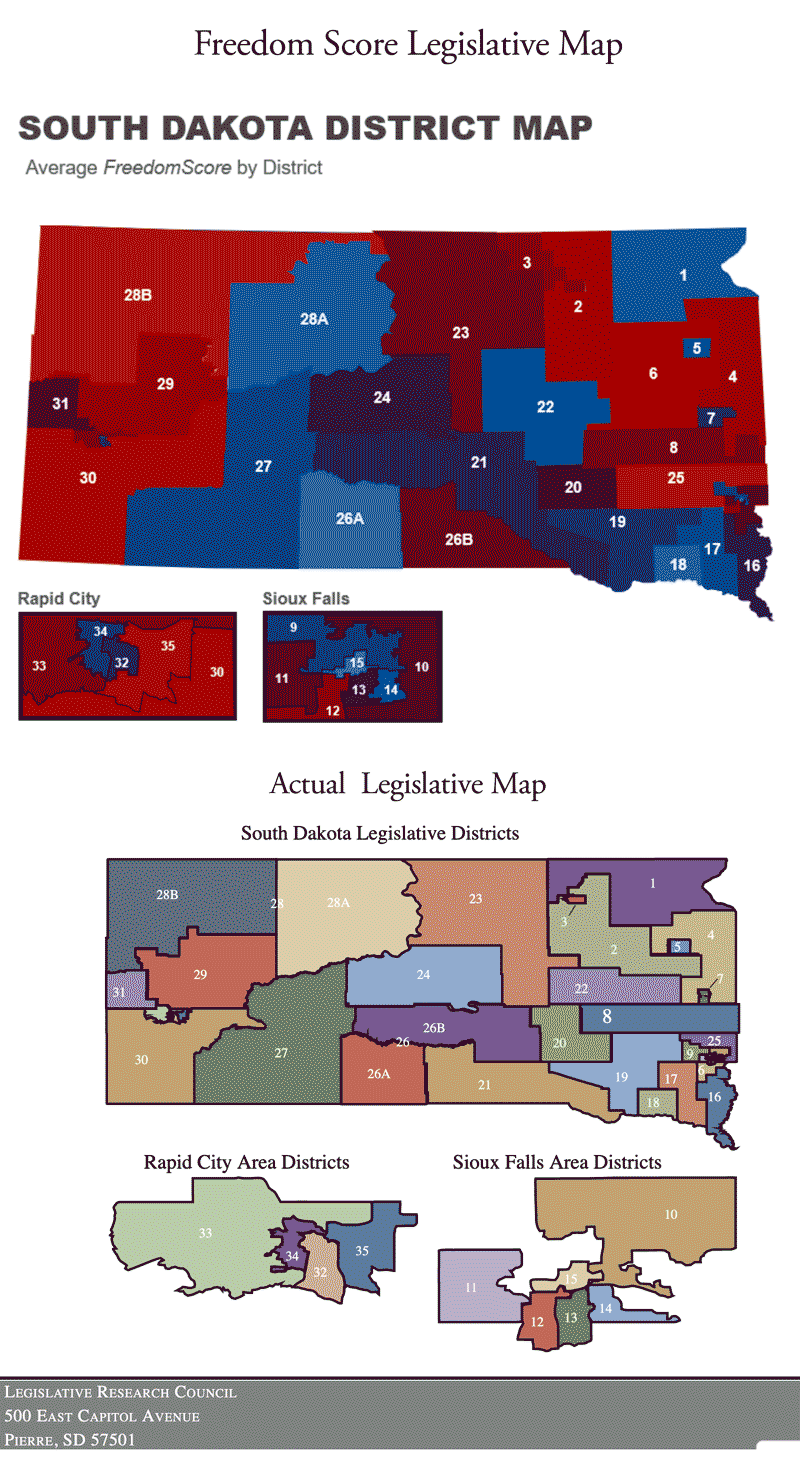 20 thoughts on “Because we need another person claiming they are the expert on what is Republican. Despite not being one.”