You know where their focus is when the first slogans of the Libertarian Party of SD’s convention announcement starts out campaigning for the legalization of pot. 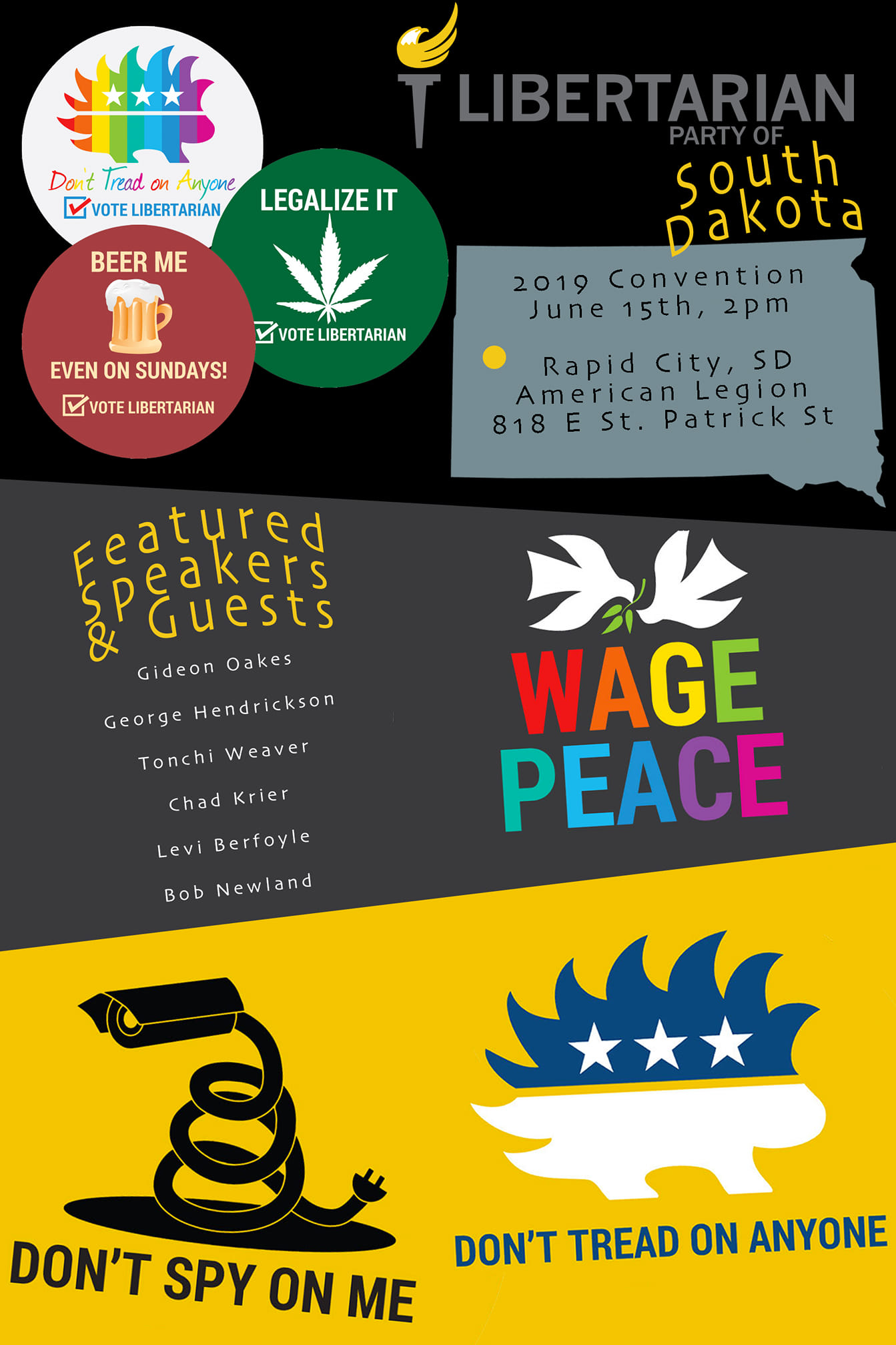 The South Dakota Libertarian Party has announced their 2019 convention, and from a glance, it seems that lawlessness is the overarching theme of the convention.

First up, they have Levi Breyfogle on the agenda to address the assembled group at the American Legion/Post 22 in Rapid City on June 15th (possibly because Tonchi Weaver is also speaking and Pizza Ranch wouldn’t let them have the room?)

If you don’t remember Levi Breyfogle, you’re in good company, since Libertarians themselves can’t manage to get his name right on their advertisement (above). Breyfogle is the person promoting measures for the ballot in 2020 including one that offers the following change to the South Dakota State constitution:

30. In order for a violation of the law to have been committed each of the following shall occur:

As noted in an earlier story, Breyfogle’s measures would appear to legalize selling pipe bombs, hookers, and crack.  Breyfogle hasn’t started circulating for the ballot yet. But given the crowd, he might be attending so he can recruit circulators.

Libertarians have also announced that at the convention they’re giving out an award to Bob Newland for his work with the Libertarian Party.  Never mind the fact that Bob is also a convicted drug felon:

Newland, who pleaded guilty to felony possession of marijuana, was sentenced Monday to one year in the Pennington County Jail.

The quantity of marijuana indicated it was not for personal use, the prosecuting attorney said.

Quite the line up.  But the Libertarian Party’s streak of lawlessness doesn’t end there… It’s just getting started: 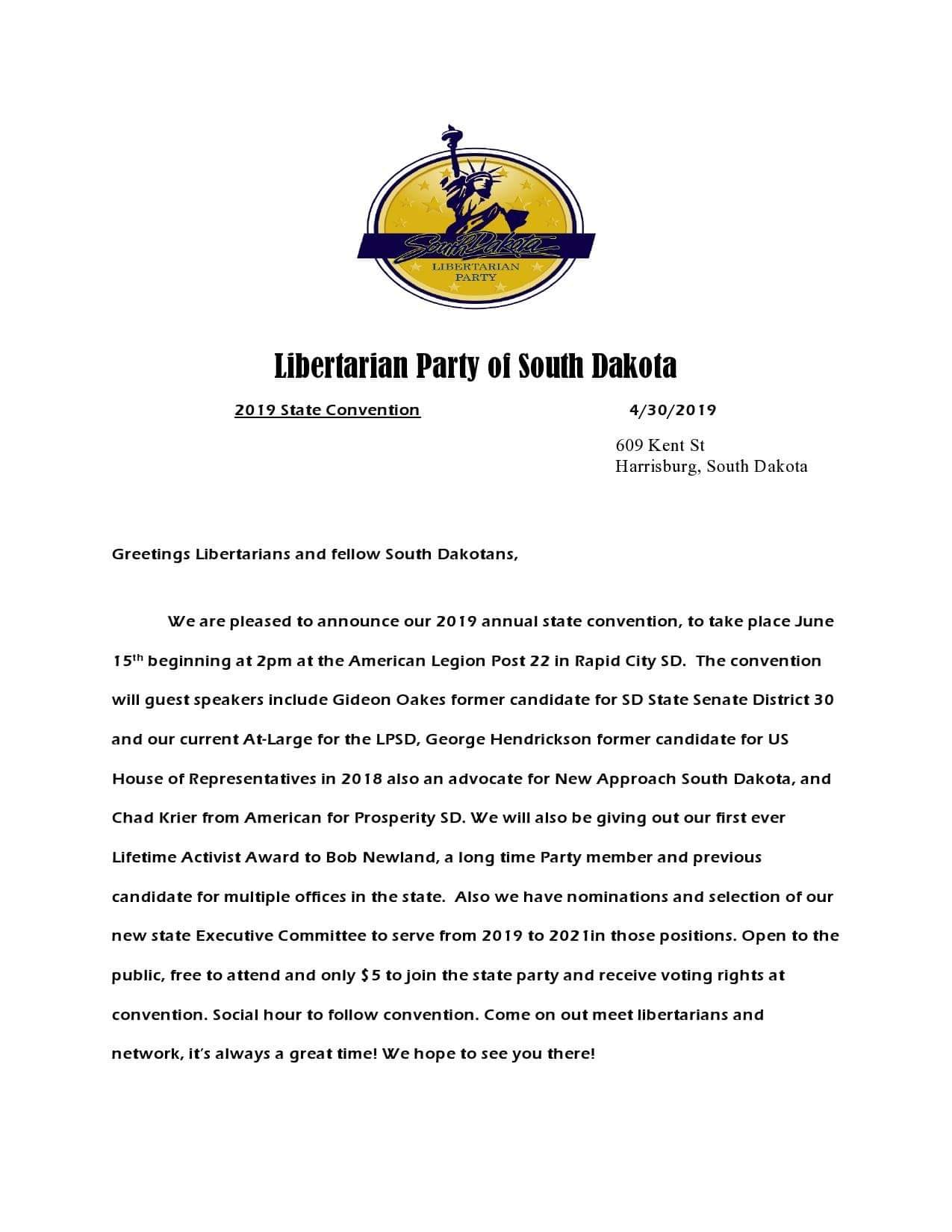 Also we will be selecting and voting for new Executive Committee members (positions run from 2019-2021).     Free to attend, $5 to become a member with voting rights.

Free to attend… but $5 to be a member with voting rights?    I think someone has had something to say about paying a fee to gain voting rights. Specifically, the US Supreme Court.

In a 6 to 3 vote, the Court ruled in favor of Ms. Harper. The Court noted that “a state violates the Equal Protection Clause of the Fourteenth Amendment to the U.S. Constitution whenever it makes the affluence of the voter or payment of any fee an electoral standard. Voter qualifications have no relation to wealth.”

Harper v. Virginia State Board of Elections heard before the US Supreme Court banned the use of poll taxes in state elections.

Now, I will concede that because it’s an off year, they might be able to argue that Harper v. Virginia State Board of Elections might not apply, because they’re not voting on a state or federal candidate, but you never know when someone might disagree, especially when they’re solely limiting voting on the basis of paying $5.  At the least, it puts that $5 requirement high on the radar for next year.

So, there you have the upcoming South Dakota Libertarian convention. A man who would to legalize hookers and pipe bombs, honoring a convicted drug felon and charging what might be a prohibited fee for voting.   Once again defining themselves in the eyes of the voters.