As he tries to jump to the other legislative chamber, Republican House Majority Leader Lee Qualm is locked in a battle for the District 21 State Senate seat, and is taking a surprising amount of heat for House Bill 1235, the anti-vaxxer legislation he served as prime sponsor for just several weeks ago.

Qualm recently posted an advertisement on his facebook page which grabbed my attention because of what seems to be the utter hypocrisy of the ad: 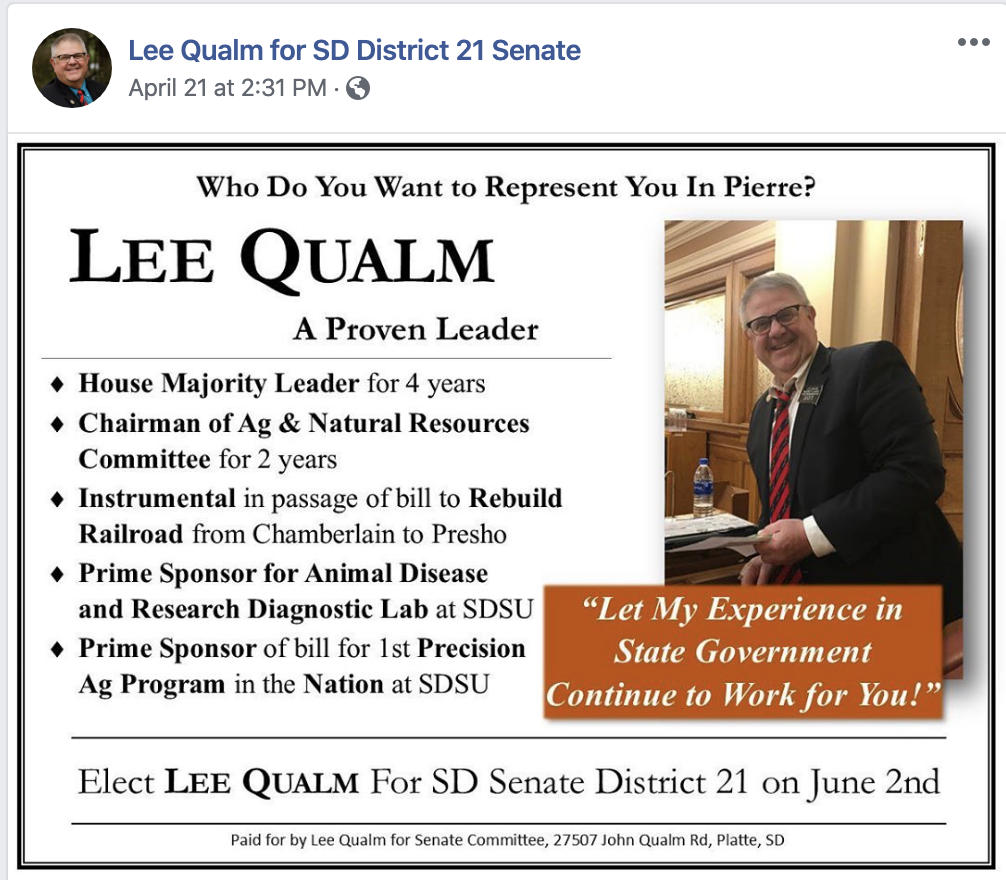 For one of his bullet points, Qualm reaches around and pats himself on the back for being the “prime sponsor for Animal Disease and Research Diagnostic Lab at SDSU.”  In fact, he even had some words of wisdom at the labs’ ribbon cutting at the time, according to Ag Week:

State Rep. Lee Qualm, R-Platte, the House majority leader, was one of several legislators that recognized the need for a new diagnostic lab and was instrumental in securing state funding. “If we don’t work with our ag industry keep them at the forefront, keep livestock healthy, you know, crops and everything is in jeopardy,” he says.

So what does the “Animal Disease and Research Diagnostic lab that Qualm is claiming credit for actually do, because “crops and everything is in jeopardy?”  According to the same 2019 article…

Dunn says the lab also will provide the opportunity for researchers to study emerging diseases to develop vaccines, treatments and even find cures.

The same Animal Disease and Research Diagnostic lab that Qualm is claiming credit for develops vaccines for livestock.  In September 2019, State Representative Qualm is at the ribbon-cutting of a facility and claiming credit for a lab that researches and creates vaccinations for cows and pigs, noting that we need to work with the “ag industry keep them at the forefront, keep livestock healthy.”

YET LESS THAN 6 MONTHS LATER, Representative Qualm couldn’t find the time to work with the medical industry to do the same for children?

Less than 6 months after his statement in support of “keeping Ag at the forefront” statement – in February, Qualm was doing the opposite, and shifting into reverse when it comes to people, and was the prime sponsor for the Anti-vaxxer legislation House Bill 1235, that would not just have ended mandatory vaccination for school attendance, but made it a class one misdemeanor – that’s up to one year in jail – to require vaccinations for employees of nursing homes & state medical students.

Did Representative Qualm collaborate with state physicians? No. Did he consult with the state’s medical schools? No. Because they all testified against his measure.

Who did Qualm have there to testify in support of the science of his measure?

Neil Rohe, a chiropractor in Sioux Falls, supported the bill to give parents the freedom to object to medical procedures for their children. In his practice, the healthiest children he sees are unvaccinated and they are “wildly healthy,” he said.

Chiropractors are good in providing treatments for a number of ailments. Many of us would consult with one on back pain, but would tend to defer to our family doctor on topics such as viral diseases and epidemiology.  But apparently, the Majority leader disagrees.

And Lee Qualm was happy to serve as his own “expert” on HB 1235, and was equal to the task of providing invalid information himself:

Qualm said he is worried about consent that parents receive and his assertion of a link between autism and vaccinations, although it’s unclear where that research has come from.

The Secretary of Health refuted that claim with a statement from Autism Speaks.

Thankfully, 10 of the 12 people on the committee disagreed with Qualm, and sided with South Dakota’s medical community and science.

It would be nice if Representative Qualm would consider working with and give South Dakota doctors and human scientists the same deference that he’s apparently willing to give those who develop vaccines for pigs and sheep.  But given his introduction of House Bill 1235 this past legislative session, I’m not holding my breath.

Qualm asks in his above advertisement to let his “experience in state government continue to work for you.”

If House Bill 1235 is any indication, he’s had his shot as to showing us “his experience in state government.”  It might be time to give really, really strong consideration to his opponent, Republican Erin Tobin of Winner.

Or else we run the risk of seeing the same anti-vaxxer nonsense again next year.

16 thoughts on “Representative Qualm claims credit for facility that creates vaccines for pigs & sheep, yet brings anti-vaxxer bill and claims vaccines for human children cause autism.”