After her campaign sent out a campaign letter, which attacked teachers, referring to them as tyrants, and others, Rapid City School Board Candidate Janyce Hockenbary suddenly developed amnesia. In addition to being an awful person.

At a Tuesday school board candidate forum hosted by Elevate Rapid City, Hockenbary publicly denied writing the letter. In a follow-up interview attempt with the Journal after the forum, Hockenbary avoided saying who actually wrote the letter, but that she approved it.

When asked who wrote the letter, she replied, “I do not know.”

She said she approved the letter “in an email.” She declined to answer any additional questions from the Journal about who the email came from and walked away from the interview.

You know, with that sudden onset amnesia, she should make sure she doesn’t have a more serious underlying condition. She should probably go see a physician.

But good luck finding a doctor who wasn’t exposed to one of those awful tyrant teachers she spends so much time complaining about. (Maybe someone’s got some essential oils laying around.)

As opposed to his fellow District 2 Candidate John Sjaarda, new candidate Jake Schoenbeck has a different approach to gain voter’s attention. He points out the fact he has the support of Governor Kristi Noem, and how they will work together.

Didn’t take him 5 pages to communicate it, either.

As soon as I posted the bat-sh*t crazy letter from the Rapid City School Board candidate, a correspondent dropped me a text and said “I got a letter that looks almost identical to this (style wise). I’m assuming they’re both Jordan Mason guys?” Well, yeah. I would venture a guess that they are.

And this letter from District 2 House Candidate John Sjaarda is equally full of grammatical errors and cringe-worthy passages as the prior letter as it declares he “knows that the liberal “woke” curriculum is injecting racial hatred, lewd and obscene ides of sexuality, gender identity and even an out-and-out right hatred of America.”

Did anyone even bother to Google “out-and-out right” before they sent this out in a mailer? Because that’s not a word, or even a slang phrase. It would be “out-and-out.” Or “outright.”  Not both rammed together in a faux Yogi Berra-like quote. Seriously.

There are a lot of other parts that are equally mired in awfulness.  But you can read and judge for yourself.

I feel bad for the candidates that are snookered into thinking this is a worthwhile expenditure of their money. Because it’s not.

Be honest and be authentic.  It works so much better than this tripe.

And people wonder why Administrators, Teachers, etc., are abandoning ship at the Rapid City School District at a record pace? Rapid City School Board candidate Janyce Hockenbary seems to be a couple of syllables away from demanding that people burn the witches.

Letter from one of the wingnut RC school board candidates backed by the Pennington County Republicans group. Pretty sure she typed this on an actual typewriter.

For context- her opponent, Jamie Clapham, is a parent volunteer in the school district and PTA president. pic.twitter.com/xOXI5ayLoq

If that letter doesn’t motivate Rapid City residents to vote against the wave of batsh*t crazy that the Rapid City school board seems gripped by, I’m not sure what will.

The bus wheels are rolling. Just got a report that at the candidate forum tonight with Elevate Rapid City, Janyce Hockenbary may be claiming that she did not write the letter! Despite it saying paid for by Janyce Hockenbary.

And there’s that other part…

Had a correspondent reach out today, and noted something that we had all missed, as the SOS had to create a separate list for the people whose candidacies became official after the primary cutoff date, because of creating the primary ballot, etc.

First off, they have the complete list of Libertarian candidates running, in case you were wondering. Not that any of them are going to win. Or run anything resembling a competent campaign.

But then we have the independents, and a couple of fairly familiar names.

Well, at least now Jack Kolbeck has a foil to use to raise money for the District 13 Senate campaign.

May 17, 2022: Today, the five former Directors of the Division of Criminal Investigation (DCI) announced their endorsement of Marty Jackley for Attorney General. The Directors served a span of 26 years and include:

The DCI is a key part of the office of the Attorney General. “The men and women of the DCI work tirelessly with our Sheriffs, Police Officers, Tribal and Federal partners to keep our homes and streets safe. I am very honored to have their support, along with the support of nearly every Sheriff and State’s Attorney in our state.” said Marty Jackley.

“Marty is the leader that South Dakota needs in the Attorney General’s Office. Having worked with Marty for 9 years as the Director of the DCI, I had a front row seat to witness Marty’s talents as the top prosecutor and civil litigator for South Dakota. Marty knows how to battle for victims of crime and for the rights of South Dakota citizens in the court room. The depth of relationships and the respect that Marty has among South Dakota’s law enforcement is unmatched. Smart, hardworking and focused, South Dakota wins with Marty as Attorney General.” stated Former Director Bryan Gortmaker, 29 years with SD Division of Criminal Investigation.

Former Director and now Yankton County Sheriff Jim Vlahakis said, “Marty has been at our side tackling crime head on as Attorney General, US Attorney and a State’s Attorney which is why so many of us in law enforcement are standing behind him now. With his proven record we know what kind of Attorney General he will be for all of South Dakota.”

Brookings County GOP Monthly Luncheon today was a good event, if but just to put eyes on a couple of the lesser known candidates. Some of them really aren’t putting a lot of material out, so you’re left guessing.  But it was a good introduction:

As part of introductions, GOP Chair Jim Gilkerson points out how every candidate seems to be referring to themselves as a conservative: 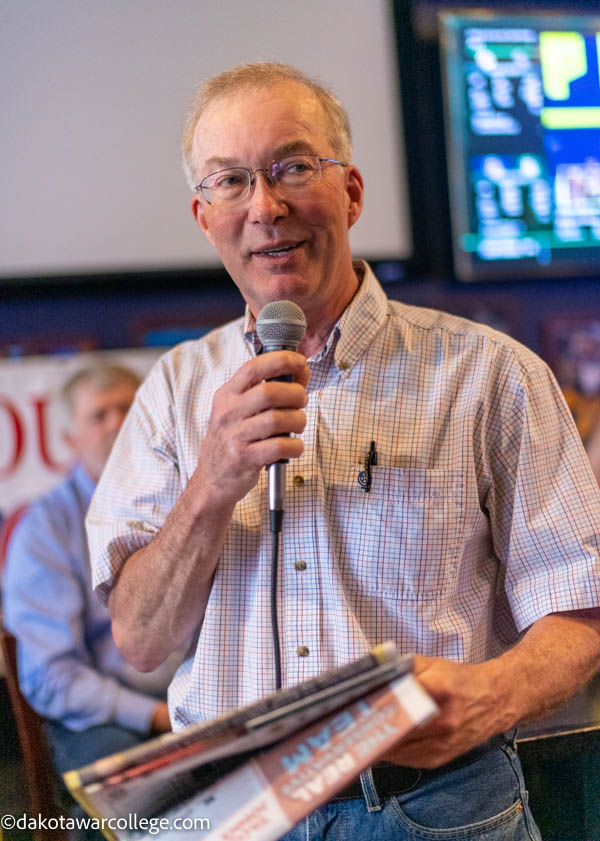 D7 House Candidate Mellissa Heerman talks about her background and experience as to why she’s running: 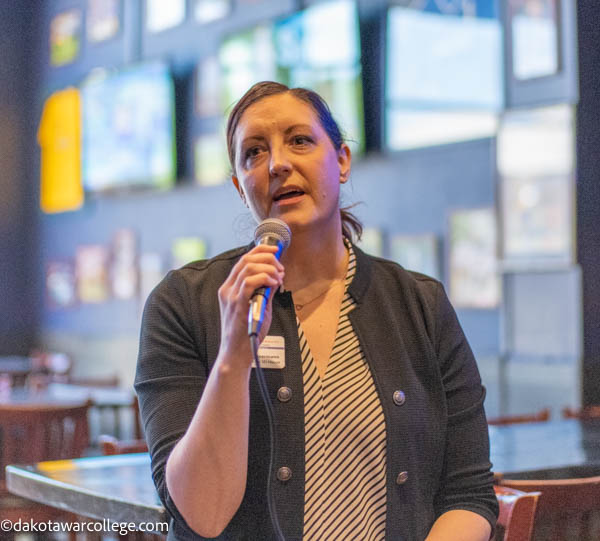 D7 House Candidate Matt Doyle cited his experience up in Pierre, and his existing relationship with State Representative Kevin Jensen as a reason why people should elect him. He wasn’t available today for questions, but said he’d answer them at some forum this weekend. 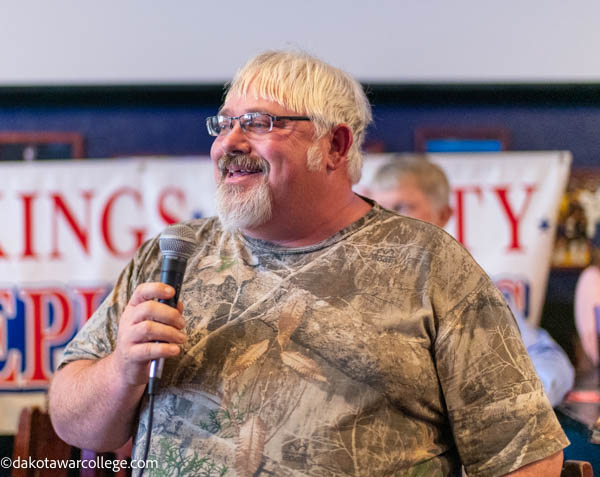 Former School Superintendent and D7 House candidate Roger DeGroot spoke about education and how employers are strongly voicing the need for workforce development. 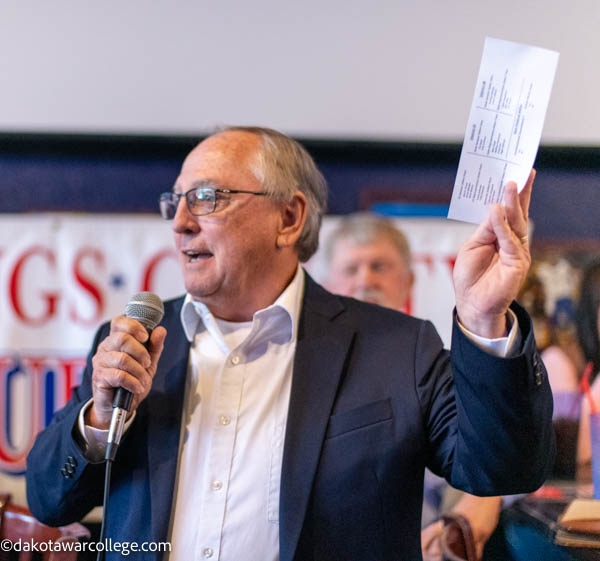 D8 House candidate Tim Reisch spoke about his background as first being elected Sheriff at age 24, and how his experience in law enforcement and the Military brought him to Pierre to serve in cabinet level roles under four Governors. 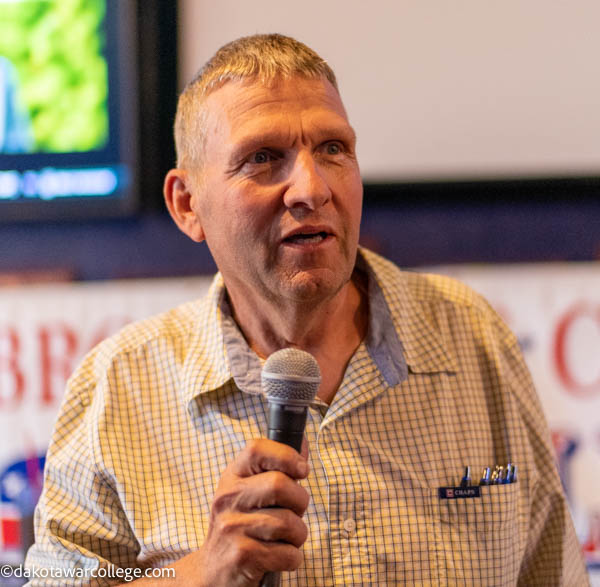 District 8 House Candidate John Mills spoke about his high ratings as a conservative among his credentials in seeking a return to Pierre. 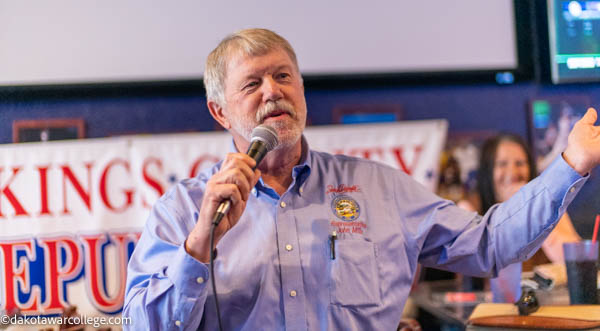 I’m still not sure who this person is. I think it’s Casey Crabtree’s opponent for D8 Senate. All I know is she has a plan to eliminate property taxes, while increasing infrastructure development.  I think the plan must involve having a huge phone attached to your hip. And speaking of Senator Crabtree, District 8 Republican State Senator Casey Crabtree spoke about economic development, the DSU Cyber program, as well as some of the other issues important to the area. And that’s what I’ve got off the top of my head.

I’ve got a couple more of these videos, and I’ll post them as they get processed.

I shot some video during today’s GOP Luncheon featuring the D7 and D8 legislative candidates, and thought I’d bring you some clips of the candidates as I could get them. (I was holding the very heavy camera with no tripod, so please keep that in mind. Tried to keep the bouncing to a minimum.)

Here’s the first video, Matt Doyle who is running for District 7 House in the GOP primary election, who gives a little background and declares postcards against Tom Pischke and Doug Post are “Fake News”:

Cenkota Republican Woman are hosting an event on May 24th for the local legislative candidates for District 24. Here are the details as provided: 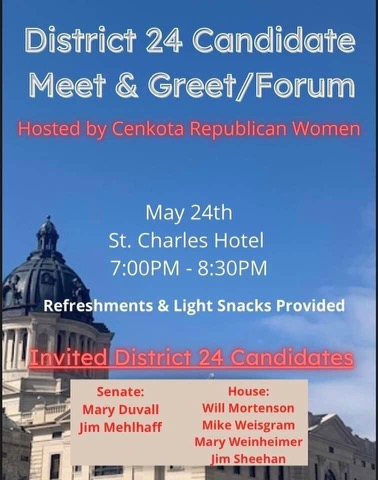