In the general election  last week, one of the races had a particularly specific focus as Public Utilities Candidate Jeff Barth – almost to the exclusion of all else – ran his campaign on the basis of one issue. Barth ran on opposition to the pipelines currently being proposed and surveyed for transporting captured carbon to North Dakota where it would be stored in the ground. As noted in one story which talked about the Barth campaign adopting this as an issue.. 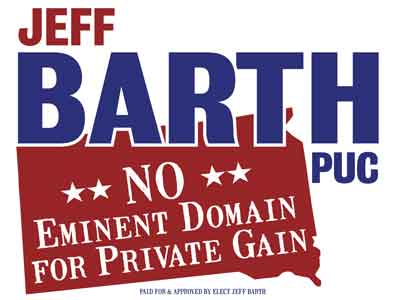 In a press conference Thursday, Barth voiced his opposition to the Summit Carbon Solutions Pipeline. The project would transport liquified carbon dioxide through South Dakota for injection into underground geological formations in North Dakota.

Some farmers along the pipeline’s proposed route are concerned about its environmental impact. They’re also concerned that eminent domain will be used to obtain right-of-way for the pipeline without landowners’ consent.

“These pipelines will scar our land forever, and threaten our very lives,” Barth said. “No eminent domain for private gain.”

Barth described his Republican opponent as a “nice guy,” but criticized him for not doing enough to prevent eminent domain from being used to build the pipeline.

Looking at a map of the counties that the Summit Carbon Solutions Pipeline will be operating in..

According to unofficial figures from the Secretary of State, from the counties that Summit self-identified as part of their operating areas:

There was not a single county along the pipeline route that Barth won. His best showing came in Minnehaha County where he had been a County Commissioner for several years, but where he still only achieved 41%.

In several of the counties, he was defeated by margins of 2, 3, 4 and 5 to 1 against his Republican opponent Chris Nelson, who pledged to hear all matters in front of the Public Utilities Commission without preconceived notion or prejudice.

In fact, none of the 4 counties where Barth led (Buffalo, Dewey, Todd, and Oglala Lakota counties) were Summit pipeline counties, but rather Democrat strongholds.  Overall, on a statewide basis, Barth lost on a margin of 31% to Chris Nelson’s 69% – more than a 2-1 basis.

Could it be said that pipeline opposition is a winning issue for a candidate in the Public Utilities Commission race?

One thought on “With a campaign based against pipelines, how did Jeff Barth fare in pipeline country? Not so well.”