I had written about Taffy Howard signing on to this document earlier, but it looks like the other half of the self-titled “Dynamic Duo,” State Senator and awful person Julie Frye-Mueller has joined Rep. Howard in calling for the 2020 election to be investigated, decertified, and remanded to the House of Representatives:

MikeRounds3qFEC by Pat Powers on Scribd

Senator Mike Rounds is not in cycle right now, and just came off of a campaign, so fundraising isn’t a priority at the moment.

(And when you’ve got about $1.5 Million in the bank, the pressure isn’t there to start doing heavy lifting in terms of raising cash.)

BFM Commissioner Liza Clark to Step Down at End of Year

PIERRE, S.D. – Today, Liza Clark, Governor Noem’s Chief of Finance and Commissioner of the South Dakota Bureau of Finance and Management (BFM), announced her resignation, effective at the end of the year.

“I admire Liza’s hard work, tenacity, and long dedication to keeping South Dakota’s fiscal house in order,” said Governor Kristi Noem. “Over her time as BFM Commissioner, she helped provide funding for crucial projects across the state while growing our budget reserves by 92%. She is a tremendous steward of taxpayer dollars, and we’ll miss having her on the team.”

“I’m honored that Governor Noem asked me to serve on her executive team and lead BFM for the last three years. Due to all the challenges we’ve encountered, nothing about the budget has been normal, but South Dakota is in a phenomenal financial situation as a result of our approach,” said Liza Clark, BFM Commissioner. “My kids are only going to be little for so long, and I’m looking forward to striking a better work-life balance. The team at BFM is second to none, and it’s been such a privilege to work with them over the past 16 years. I’m comfortable moving on because I know the state is in great hands.”

A South Dakota native, Liza graduated from Miller High School and holds a bachelor’s degree in finance and economics from Northern State University and a master’s of business administration from the University of South Dakota.

Liza and her husband Zach, a small business owner, live in Ft. Pierre with their two daughters. Liza enjoys spending time with her family, playing a variety of sports, and having fun on the Missouri River.

Stopped by Nick’s Hamburgers, a Brookings favorite, for … you guessed it, one of their amazing burgers.
Father-son team Todd and Cody cook up a great cheeseburger.
And to make the stop even better, I ran into Kimberley’s Uncle Joe. pic.twitter.com/2Ww5C6rzVQ An Ode to the Pheasant Capital of the World
By Sen. John Thune

For many South Dakotans, the third Saturday of October is Christmas morning’s toughest competition. Opening weekend is a time when friends and loved ones can come together, enjoy a beautiful fall weekend, and hopefully bag a few ringnecks in the “pheasant capital of the world.”

I know I’m not alone when I say this unofficial holiday is circled on my calendar every year. For me, this has always been a family experience. I’m forever grateful to my dad for instilling this South Dakota tradition in me and my siblings. And I’m even more grateful to be able to pass this tradition down to future generations.

The hunt itself can sometimes be overshadowed by the anticipation – digging up the blaze orange, cleaning shotguns, and telling stories about seasons past. It’s all part of the tradition, and it never gets old.

It’s hard to picture what fall in South Dakota would be like without hunting ringnecks. For hotels, restaurants, sporting goods stores, and hardware stores, opening weekend signifies weeks and months of hard work and preparation. Folks from around the world travel to South Dakota to experience pheasant hunting season, and they bring hundreds of millions of dollars in economic activity with them.Small businesses across the state depend on the revenue generated from the influx of hunters and out-of-town visitors throughout the season.

This may be obvious, but without pheasants, there’s no pheasant hunting. A key contributor to South Dakota’s pheasant population is the Conservation Reserve Program (CRP), which was created to take environmentally sensitive land out of production and increase wildlife habitat. Now, CRP has evolved into a 20+ million-acre program that saves millions of tons of soil from erosion and improves water quality so pheasants can adequately nest and raise their young. CRP also provides a sound economic alternative to placing expensive seed, fertilizer, and chemicals on high-risk marginal land. As a longtime member of the Senate Committee on Agriculture, Nutrition, and Forestry and a lifelong hunter, I am a strong supporter of CRP and grateful for the farmers and landowners who participate in the program.

Hunting season in South Dakota is a special time of year. I hope folks are able to carve out some time in the next few months to get outside and partake in this timeless tradition. I wish all the hunters a safe and successful season.

Break out your blaze orange vests; pheasant season is back again in South Dakota!

As the leaves begin to turn and the air turns crisp, I am taken back to the many fall afternoons I’ve spent walking fields in the hopes of flushing a rooster. Like many South Dakotans, I cherish the great memories made during the tradition of sportsmanship with my family and friends.

The success of pheasant hunting in South Dakota is a testament to how private enterprise and local government can work together to promote both economic development and wildlife conservation. 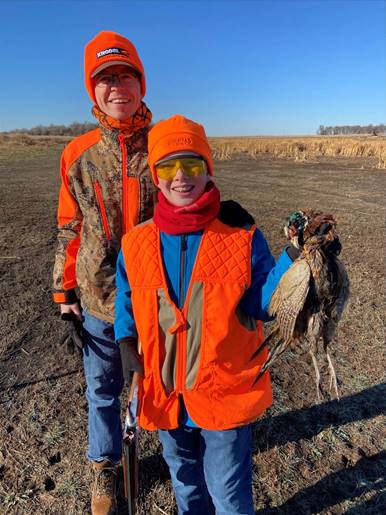 Effective management of our pheasant populations has turned what was already a long-standing pastime into a real driver of economic growth for the state. From lodging to licenses, pheasant hunting generated $218 million for South Dakota in 2018. Overall, outdoor recreation generates an estimated $1.3 billion in economic activity annually.

It is equally important to remember that as sportsmen, it is our duty to preserve our state’s wildlife and natural resources for future generations. The South Dakota Department of Tourism has renewed its partnership with Pheasants Forever, a nonprofit organization dedicated to habitat conservation to ensure that South Dakota remains the “Pheasant Capital of the World” for years to come.

While many in Washington are pushing for increased environmental regulations across the board, South Dakota has shown how successful a local approach can be to wildlife management. Our pragmatic approach is the reason so many people can experience and enjoy one of South Dakota’s greatest traditions.

At a time when his most prominent primary challenger is noting they haven’t raised enough to meet the reporting threshold, US Senator John Thune had a good month of fundraising, where he took in $376,544.52 into the Friends of John Thune Committee, spent $213,243.41, leaving him with only $14,839,846.75 to run the next election.

I’ve spent a lot of time lately talking about South Dakota being ranked one of the hardest working states in the nation. And we continue to be the number one state for economic recovery — Moody’s Analytics has our economy operating at 105% on its “Back to Normal Index”. Despite all these positive economic indicators, businesses here are still struggling with a common challenge: workforce shortages.

Now is a great time to remind employers across South Dakota that it’s National Disability Employment Awareness Month. South Dakota is already among the top states for employing individuals with disabilities, according to data from the Census Bureau and U.S. Bureau of Labor Statistics. And we lead the nation in the percentage of individuals with disabilities working in management occupations. 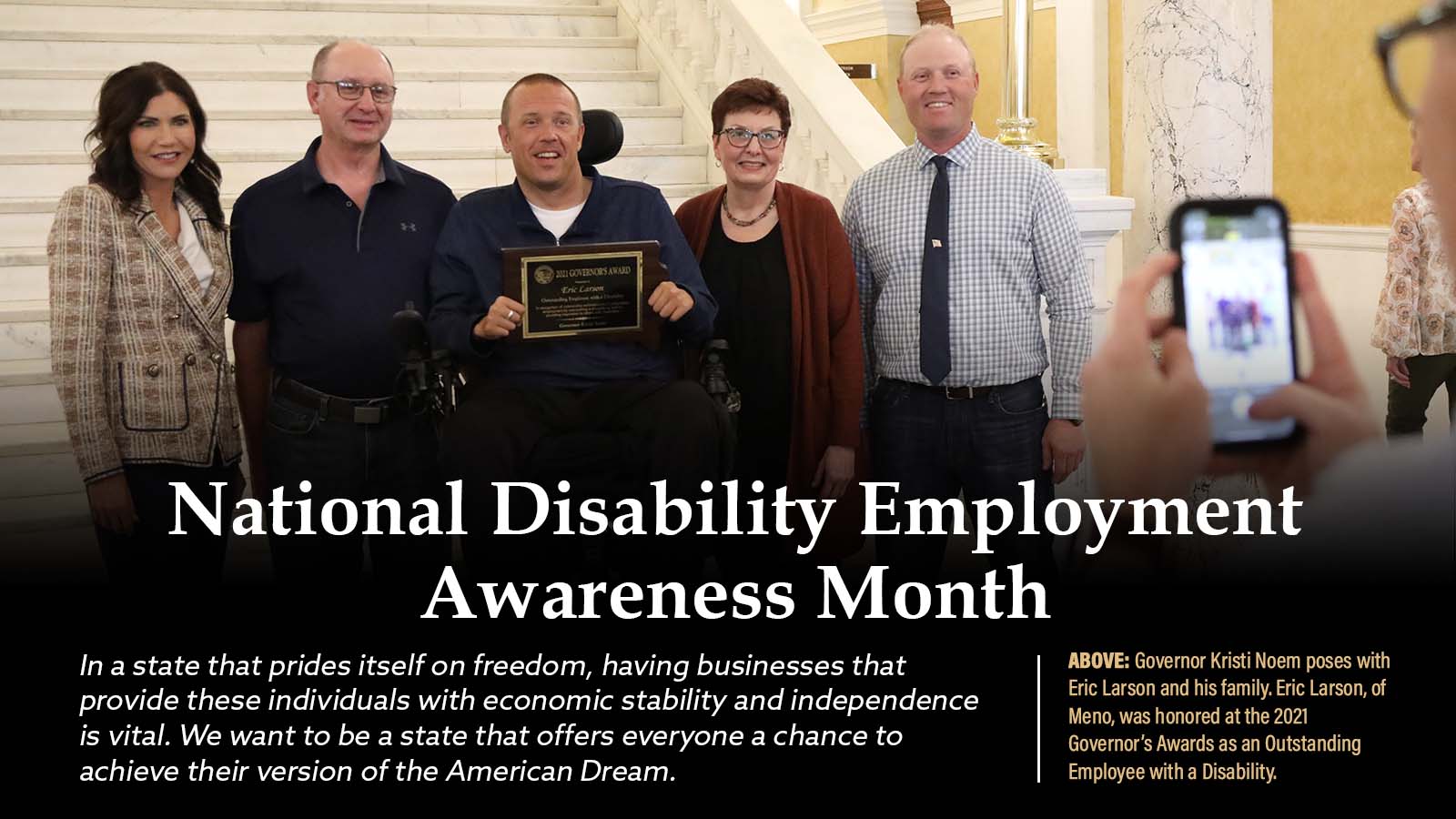 That’s because we understand that these folks aren’t defined by their disabilities. They are defined by their strong work ethic, strength of spirit, and their ability to overcome adversity. Those are strong characteristics that any employer should want in their workforce.

As businesses look for ways to address workforce shortages, I encourage them to reach out to the Department of Human Services for information and resources on hiring individuals with disabilities. The Department of Labor and Regulation is also an excellent resource for businesses.

In a state that prides itself on freedom, having businesses that provide these individuals with economic stability and independence is vital. We want to be a state that offers everyone a chance to achieve their version of the American Dream.

I am grateful to every person who is playing a role in this issue and fighting for positive outcomes. We are proud that our state is open for business and that unemployment rates remain among the lowest in the country. That should be the case for everyone in our state, regardless of disability status.

If you are a business owner or employer looking for solutions to your workforce shortage, take the time to learn more about hiring someone with a disability. You will be glad you did.

The House and Senate Legislative Redistricting Committees spent three days traveling across South Dakota to take public input on what the state’s new legislative districts should look like. We started at 8:00 a.m. on Monday in Rapid City and ended at 8:30 p.m. on Wednesday in Sioux Falls. We traveled over 1,100 miles, making stops in Mission, Mobridge, Aberdeen, and Watertown along the way. More than 200 people attended our listening sessions.  We heard from about 100 people who took time to weigh in on South Dakota’s future legislative districts.

Many people indicated they generally like their current legislative districts. As we move forward, we are trying to preserve the core of the current districts as much as possible.  Because of changes in South Dakota’s population – an increase of about nine percent over the past ten years, primarily in the southeast part of the state – we know that at least 34 of the state’s 35 legislative districts will need to change to comply with our constitutional requirement of one person, one vote. The only district that doesn’t need any alteration is the one encompassing Lawrence County, which grew at the right pace to comprise a legislative district.

Voters and county auditors would like counties to be left whole where possible.  According to the census, seven of our state’s 66 counties are too large to fit within one legislative district. Brookings, Brown, Codington, Lincoln, Meade, Minnehaha, and Pennington counties will have to be split into more than one district, to satisfy the constitution’s equal protection clause.  As we work to assign the rest of the state into logical legislative districts, we are trying to minimize splitting any of the remaining counties as much as possible.

We heard from the Native American community about protecting minority voting rights. One of the ways our committee is addressing this is to follow the current boundaries for Districts 26, 27, and 28 as much as possible to meet the requirements of the Federal Voting Rights Act, while also meeting population requirements as required by the Constitution.

Protecting communities of interest is another theme that emerged from our listening sessions.  While this concept is not clearly defined in law, we heard how citizens see their local community of interest. As our state becomes more diverse, we expect this conversation to continue.

Over the next few weeks we will be working to incorporate these suggestions into a proposal for legislators to consider during the Special Session on Redistricting, set for November 8-9 in Pierre. Our over-arching goal is to develop a map that meets our constitutional obligations and statutory guidance, and is fair for the residents of our state.

Proposed maps are available for the public to view at sdlegislature.gov. Additional thoughts and ideas can be emailed to [email protected].