I have a few campaign items that came home from the State Fair.

Unfortunately, for US Senate Candidate Mark Mowry, it looks like it could be an expensive state fair for him (and his hat.) 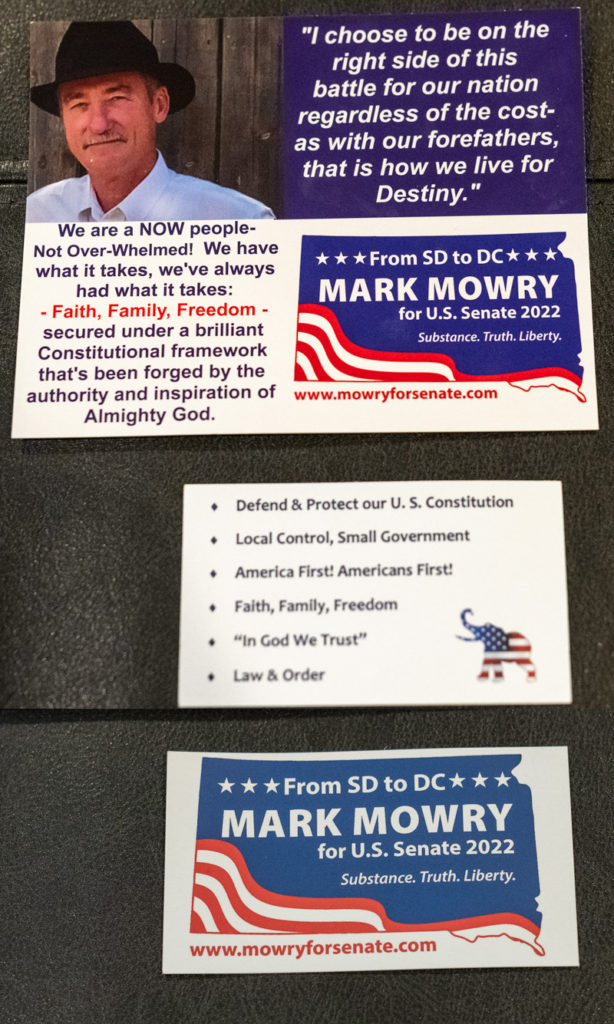 While his campaign card does picture Mowry in his ubiquitous black hat that seems to go everywhere with him, it what his campaign material lacks that’s going to get him in trouble. And besides the fact that it’s just a god-awful pile of gobbledygook, the problem is that it completely lacks the disclaimer required by Federal Election Law:

The problem is that literally none of his communications have the required disclaimer in the manner prescribed by the federal government.  Not the materials he hands out, nor his website, which has a disclaimer, but not as required.

How expensive is the price of poker in that situation? Well, it’s not good:

On February 27, the FEC announced that former Congressman Martin Frost’s campaign committee would pay a $6,000 civil penalty for failing to include the proper disclaimers on printed communications.

The FEC began its analysis of the campaign literature by noting that each mailing contained a disclaimer, “Paid for by the Martin Frost Campaign Committee,” that properly identified the sponsor.

Finally, the Commission’s regulations provide that disclaimers on printed, public communications must be contained in “a printed box set apart from the other contents of the communication.” Because the disclaimer in the Frost committee’s mailings was not set apart in such a box, the FEC found that the committee had violated the law.

So in this case, they HAD the disclaimer, but it cost them a staggering $6000 because THEY FORGOT THE BOX around the disclaimer. (That’s an expensive darn box!)

But in Mowry’s case, he’s omitted the disclaimer in its entirety.

For starters, he might end up having to pitch everything he’s printed to date. The other part might be if someone tattles on him to the Federal Elections Commission.

Either way, it could be interesting. And maybe a less than successful State Fair for Mowry (and his hat.)

14 thoughts on “US Senate candidate Mark Mowry candidate skips the disclaimer required by law on his materials. That could be a problem for him.”

To contact the blog overlord (or at least the editor), drop me a note at [email protected]com. I usually respond within a few hours. Unless you're grumpy. I'm also available at twitter @SoDakCampaigns