As I come back to a status of slightly more active posting, coming down off of my COVID induced sabbatical, I have to say that it seems like I’m coming back to a somewhat chaotic time, to say the least.

The long-awaited report of the Attorney General’s accident has hit the media, and I suspect it’s only going to be the start.  There will be the inevitable civil lawsuit, as well as more details to come from there.   Plus, if someone tries to make something happen during the legislative session over misdemeanor charges, I’m sure there will be more details that will continue to drip out.

But in the meantime, did everyone notice that we have two candidates aggressively pursuing the vacancy in of the office of School and Public Lands –  Jordan Youngberg & Brock Greenfield – with at least 1-2 more eyeing it up?

And mentioning the next Attorney General’s race.. it did not escape many people’s attention that former Attorney General Marty Jackley was at the GOP Central Committee meeting events on February 5 & 6, saying hello.

After ginning themselves up on the words of Bruce Whalen vodcasting to them a couple weeks back, the leader of the group of people who want to primary John Thune in 2022 – Julie Korth –  is promoting weirdness and is suggesting people rethink their churches because apparently they need to be more conservative.. 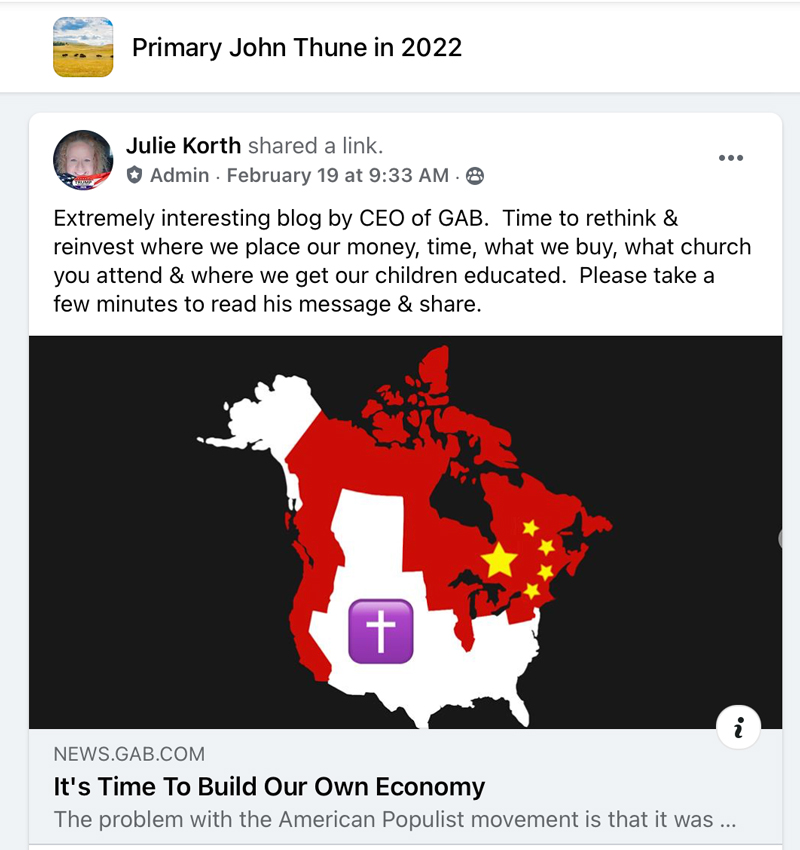 The anti-Thune group seems to have completely jumped the shark at this point, and has long devolved into goofiness, with retirees and bored people spending their winter hours sating themselves on memes.

With this type of activity a year out from the time when candidates start coming out of the woodwork, a few predictions for what I think we’re going to see place.

Primaries at the State or Federal level?

Meh. Just not seeing anything to take seriously.

As noted, I think we’re seeing a lot of goofiness and buffoonery.  Maybe the anti-‘s  could get someone to take the hit for their team, but didn’t we see this last election?   When you are getting yourself puffed up to use candidates like Lora Hubbel or Liz May to be your messenger, you can prepare for the incumbent to defeat them with a vote of 75-80%.

We’ve got at least one right now.. and I think there’s a possibility we may will have a couple.  School & Lands obviously.  AG? Likely. Anything beyond that is pretty unsure.

Now here’s something we haven’t spoken about for a while. In case you might have forgotten, we’re moving into re-districting later this year, and everything that was old will now be new again.   Plus there will be 13 seats up due to term limits.

Here’s where we’re going to see a lot of new faces, some old faces shifting to another chamber, and some hard-fought battles.  No specifics as of yet, but when we see realignments, we get people who pop up from outside of anyone’s radar, and decide to just run for the sake of running for office because they want to make a difference.

Not a lot of chaos. But maybe just a little.

6 thoughts on “Are you getting ready for the chaos of 2022? Not a lot of chaos. But maybe just a little.”