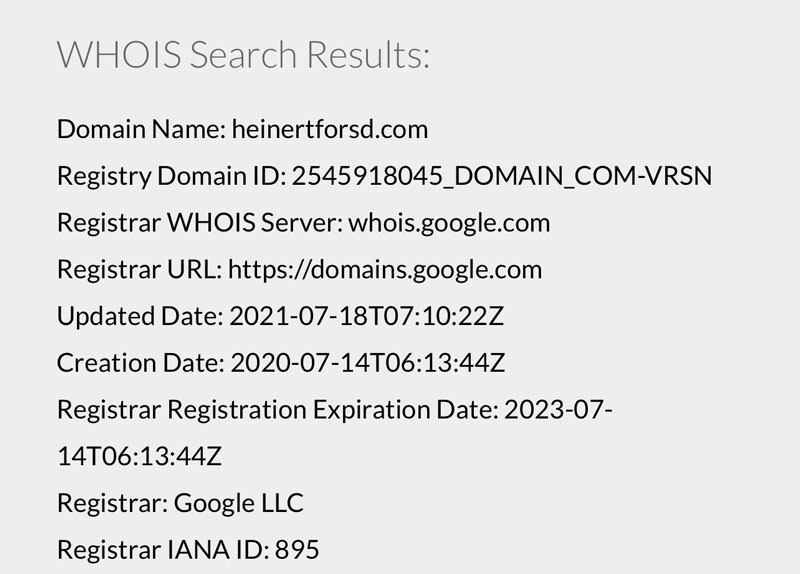 Looks like Governor Noem has her opponent, as we continue to see and hear evidence that South Dakota Democrat Senator Troy Heinert will be the Democrat party’s cannon fodder for Noem to grind up in the November 2022 election cycle.

The HEINERTFORSD.com domain was recently registered through Google.com according to a whois search, which goes along with what I’ve heard; that in the past couple of weeks, no less direct a source than Heinert himself has supposedly been telling people privately that he’s in.

This follows a June news report that he’ll be making a decision soon:

Heinert, an enrolled member of Rosebud Sioux Tribe, led a bipartisan dissent against the governor’s merger of the two agencies overseeing environmental regulations and agriculture, and he also introduced a resolution approved by the Senate calling for a congressional inquiry into rescinding battle honors awarded to U.S. soldiers who participated in the Wounded Knee Massacre. He told FNS he and his family are “evaluating what my next move will be.”

Former Democratic state legislator Dan Ahlers, who unsuccessfully challenged Sen. Mike Rounds in 2020, told FNS he’s not decided himself on his political future but was excited by a potential Heinert candidacy.

“He’s well-spoken and has a good background,” said Ahlers. “I think he brings a moderate perspective to things, and he is also someone who could help the state mend fences and build bridges on Native issues.”

(Just as an aside, troyheinert.com and heinertforgovernor.com were already off the market at the time that the article was written.)

While Troy is personable enough, I suspect his views, votes, and even some of his legislation will put him squarely in the crosshairs of Governor Kristi Noem on the campaign trail.

Noem will have significant ammunition, with Heinert being among the legislature’s most staunchly pro-choice Democrats, ranked at second most pro-choice Senator in the last election only after former Senator Susan Wismer by South Dakota Right to Life, and previously receiving a 100% ranking from NARAL SD.

Heinert was also one of the three lowest-rated South Dakota state legislators in 2020 by the American Conservative Union, at 37%, based on their issues.

Had Troy had his way in 2019, I might be risking arrest by writing this article.  Why? Because outrageously he had authored a bill to criminalize speaking against politicians. He actually tried to create a new class of laws creating criminal penalties and subjecting people to arrest for speaking out against politicians.. in America.

And that’s just the start of a laundry list of issues Heinert will have to face running against Governor Noem.

Of course, he’ll have what he perceives as his own ammunition against her. But it remains to be seen if he will be able to convince a majority of South Dakotans that they should replace Governor Noem with himself.

7 thoughts on “HEINERTFORSD.COM domain registered. Looks like Governor Noem has her opponent, and I suspect it’s not going to be pretty.”