This isn’t something that the people in Dell Rapids read every day in their public notices:

A hearing has been noticed for September 23rd at the Minnehaha County Courthouse that the parents of a 13 year old girl are petitioning the court to change the child’s “gender marker” from “female to male on the minor child’s birth records.”

The court filings in this matter are even more interesting. (I have redacted information, as it involves a minor child):

While the name change portion of the petition was granted by Judge James Power, the portion of the decision referring to “gender marker” was scratched out on the paperwork, and it appears to have been noticed for hearing.

Why? There’s no such thing as “gender marker” in South Dakota state law.

The term “gender marker” itself seems to have arisen only in the last couple of years in reference to discussions about changing the designation of sex on official documents. “Sex” in the gender reference is a biological reference, where “gender marker” seems to be more of what people trying to change it are calling a reference to a legal status.

If South Dakota is going to open the door to “gender status” it opens up an entire can of worms that the state has not touched on yet in terms of changing legal designations of gender.

And that’s just the start of it. Because this legal filing may also shock the legislature to action.

Contained as part of the court documents, it describes that this 13 year old minor child has prepared for and appears to be receiving hormones for gender reassignment: 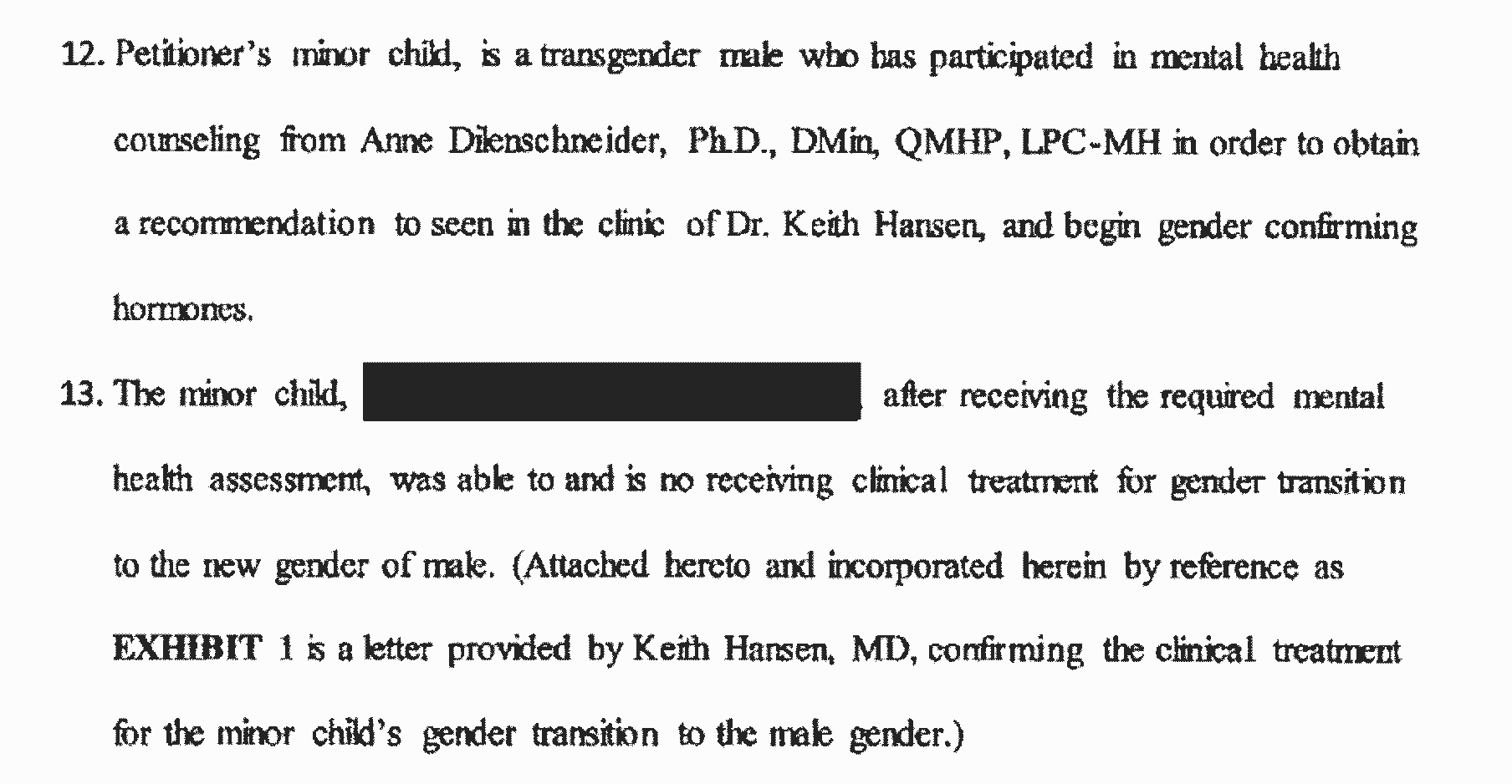 This court filing may be the first hard evidence as to the fact that gender reassignment treatments are actively being performed in South Dakota on minor children. And that’s important because this topic is one we’re going to hear about it this next legislative session.

Under a comment on this website back on July 25th, State Representative Fred Deutsch made note of his intention to bring legislation this next session that would regulate the procedures the parents in this matter intend to allow to be conducted on their child:

Next session I will bring a bill with the similar purpose of protecting South Dakota children from dangerous, unscientific and life-altering medical procedures pertaining to sex and so-called gender identity. I’ll take a different approach, and hope I can prove to the legislature, the governor, and the people that the bill is important and necessary.

South Dakota may find that this could be one of the major fights of the upcoming legislative session.

Going beyond the choices an able bodied adult makes for themselves, the fact that these medical procedures are something that parents are asking/allowing to be performed on minor children as young as 13 years old is shocking to the conscience of many.

Stay tuned for more on this as the story develops.