Article III    § 31.   Convening of special sessions upon petition. In addition to the provisions of Article IV, § 3, the Legislature may be convened in special session by the presiding officers of both houses upon the written request of two-thirds of the members of each house. The petition of request shall state the purposes of the session, and only business encompassed by those purposes may be transacted.

In 1990, a constitutional amendment was passed to grant the South Dakota Legislature additional authority to call itself back for a special session when two-thirds of the members of each house petition for a special session for a specific purpose.  That authority has only been utilized by the South Dakota Legislature on a very limited basis since that time, and up until now, only for redistricting.

According to a 2021 draft memorandum on the topic from the Legislative Research Council:

As noted, the “Special Session by Legislature” has previously been exercised three times, and you can find a couple of them on-line if you look hard enough: 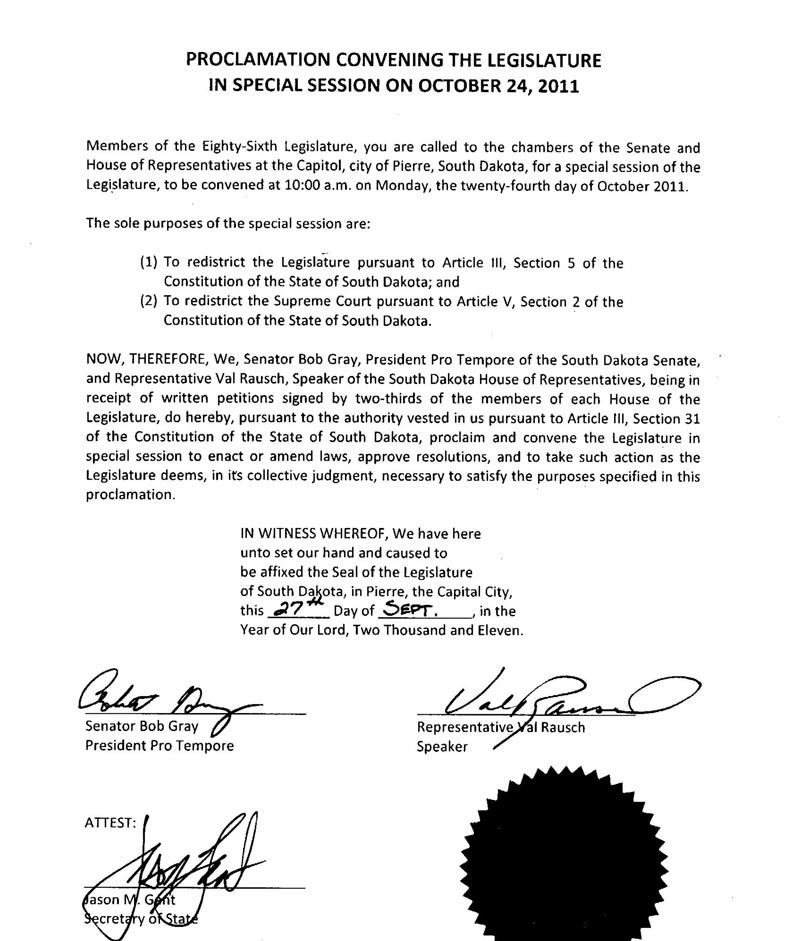 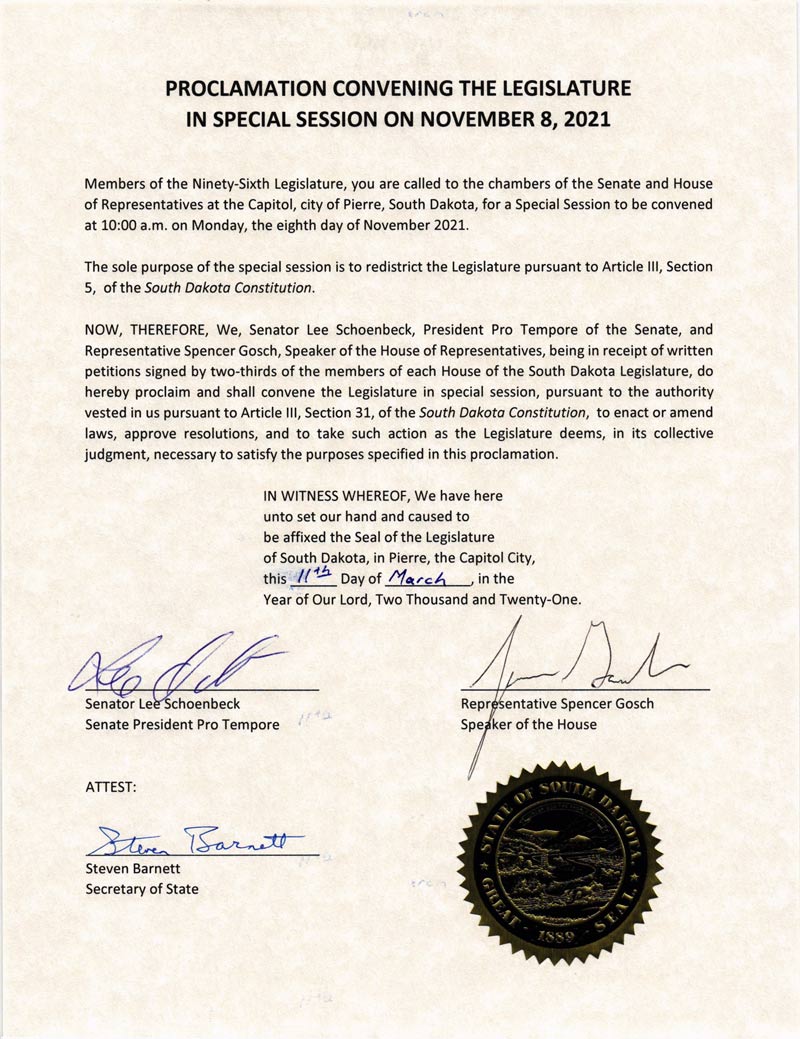 Redistricting is a fairly ministerial task, so while people are going to quibble about where the lines are drawn, people agreeing to hold a session for that purpose is fairly non-controversial.

But now we’re faced with a call for a special session for a more controversial purpose, for the impeachment of a state official. In connection with the call for the convening of the legislature, the Speaker of the House is setting forth that the vote on whether or not to come into session will be held as secret from the citizens of South Dakota:

..South Dakota’s House Speaker Spencer Gosch, R-Glenham, told the Argus Leader this week the names of lawmakers who sign the petition for a “Special Legislative Session on Impeachment” will not be released to the public.

“We’re just voting for a meeting. That’s all we’re voting for,” he said. “So ultimately, who voted on whether or not we should get together is not relevant.”

And though he intends to make resolutions, testimony and committee meetings regarding impeachment open, he cites a provision in South Dakota’s open records laws allowing correspondence among public officials for keeping petition signatures secret.

In the Senate, two-thirds of members are also required to sign on to the House leaders’ petition and those names won’t be public either. That’s because Senate President Pro Tempore Lee Schoenbeck, the Watertown Republican who presides over that chamber, said he’s following the House’s lead.

As you can read in the article, open government advocates disagree with the decision.  The law for “correspondence among public officials” is the one being cited to give the legislature an out for releasing the vote on the petition. But what does that law actually say?

1-27-1.5. Certain records not open to inspection and copying.

(19)    Personal correspondence, memoranda, notes, calendars or appointment logs, or other personal records or documents of any public official or employee;

While it’s noted that legislators are “just voting for a meeting,” the State Constitution is pretty clear that the special session demands that it can only be held “upon the written request of two-thirds of the members of each house.”  Written is definitely stated. So, these written documents should be filed somewhere.

The bigger question is whether they will ever see the light of day. Because the State Constitution does provide the legislature a more clear-cut out, but it’s not going to play as well when it’s invoked:

Article III  § 15.   Open legislative sessions–Exception. The sessions of each house and of the committee of the whole shall be open, unless when the business is such as ought to be kept secret.

That’s the portion of the State Constitution that allows the South Dakota State Legislature to invoke “we’ll do what we want,” and decide for themselves what they want to keep from the voters of the state. I’m not sure any court has tested the “ought to be kept secret” portion of the constitution, but it would make an interesting debate as to what scenarios the courts believe that would entail.

Now, not all legislators are so concerned with keeping where they stand on a special session hidden from the public.  In fact, some are more open about it, such as State Senator Dave Wheeler:

His position is certainly not enviable, but legislators were elected to make decisions on behalf of all their constituents. And there is a general expectation from the people of South Dakota is that they will do so in the light of day.

The past session, there were a number of legislators who stood up and were eager to be on the record, so much so that members of House leadership held a press conference. Which makes the more recent reluctance to be on the record a bit confusing.

I’m sure we’ll see this play out more in the days to come while we wait to see what the legislature decides to do.