What other changes will we see? I did catch in one of her speeches that Secretary Johnson mentioned we should have greater campaign finance disclosure to allow donors to be searchable on the SDSOS website. Which I found extremely interesting, as the capability was there at one point, only to be removed.

The ability to search donors across the entire system was put in place after Secretary of State Jason Gant took office back in 2011, in the form of the “C.A.S.H.” system as implemented by the office at the time: 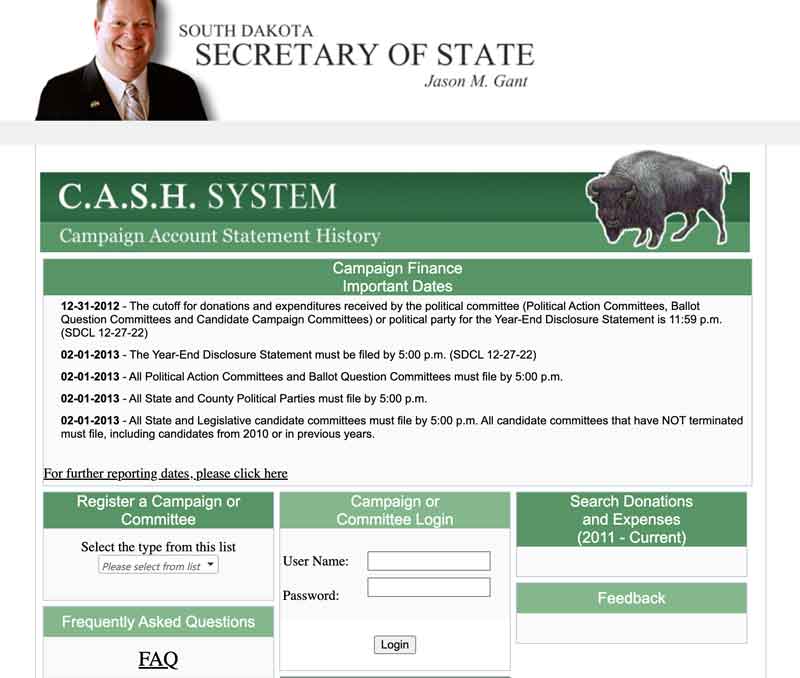 For open government and those who research donations, it was revolutionary and an absolute boon. The problem? Legislators hated it. They really hated it.

In the start, legislators were required to go into the system and key their donations in, or upload a spreadsheet. This represented a big change to the procedure under Chris Nelson as Secretary of State where they just sent in a paper form.   Change is hard, especially for those in the legislature who lean away from the younger portion of the age scale.  There was resistance in going fully electronic from some. Another part was that was for the system to automatically account and to trigger reporting when you hit the $100 threshold for reporting. So it required all small donor amounts to be put in the system, and that also brought pushback from those who didn’t like the smaller donors being entered.  And, there was a person or two who didn’t care for the disclosure that the system brought, because the system also provided the same transparency to Political Action Committees.  If you were juggling things across several PACS, it made it pretty easy to ferret that out, and there were those who didn’t like that.

After some time battling complaints of those who held the purse strings, there were changes made.  Paper forms could be submitted if so desired, and they would be entered into the C.A.S.H. system, keypunched by SOS employees. But the handwriting was on the wall with enough elected officials disliking aspects of the new system.

When Secretary of State Shantel Krebs took office, the entire system was shelved, and a system put in place that at the time had worse lookup capability than what was available under SOS Nelson, and would pull up the once again paper forms that legislators would mail and fax in. Since it’s earliest form, the system has been slightly improved and refined in the eight years it has been in operation, but at it’s heart, it is largely a simple lookup tool for paper forms.

A decade later, we’re now back full circle. With landmines that I suspect are still there, but still a call for voters wanting to have the ability to know more about our elections.

If Secretary of State Monae Johnson wants to improve the system as she has mentioned with greater disclosure, there are a few hurdles she has to cross, mainly in how she would get the information in, and who would do the input? And how to make it user friendly.

But, increasing transparency and open government is always a good thing.

4 thoughts on “Secretary of State website updated with Monae Johnson masthead, other changes coming as we come full circle.”