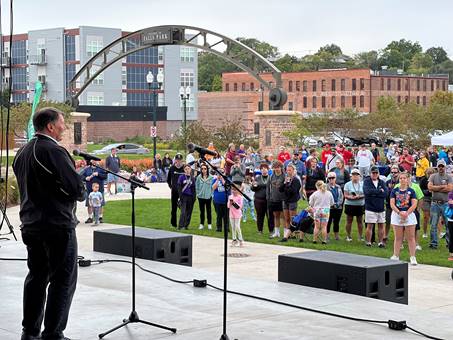 It was another busy week out in DC! My schedule was packed with committee hearings, floor votes and meetings with South Dakotans. Although we have long days filled with work, we had fun moments throughout this week, including presenting some special awards and receiving some pretty cool awards, too. Here’s my Weekly Round[s] Up:

I also had the opportunity to meet with John and Beth Hughes, my nominees for this year’s Angels in Adoption Award. John and Beth have helped with over 500 adoptions in 45 states during their 31 years of practice. It was great to see them out in DC and recognize them for all of their hard work.

We also had our weekly Senate Bible Study (1 Corinthians 13:1 was our verse this week) and our Senate Prayer Breakfast (Senator Hagerty from Tennessee was our speaker).

I was able to meet with Robbie Willard, a Vietnam veteran from Renner, and award him a Vietnam Veteran Lapel Pin to thank him for his service.

Topics discussed: The reveal of the B-21 Raider bomber coming this December, the upcoming continuing resolution to keep the government funded for a few more months, and the need for increased mental health services.

Votes taken: 9 – Most of these votes were on nominees. We also voted on the ratification of the Kigali Amendment to the Montreal Protocol, a treaty concerning the environment that could increase costs for South Dakotans. I voted no.

Hearings: There were two hearings in the Banking, Housing and Urban Affairs Committee again this week. The first one was focused on US sanctions on Russia. In the second hearing, we heard from the CEOs of America’s seven largest banks. I was also ranking member had a Housing subcommittee hearing on the Department of Agriculture’s rural housing service. There was an Armed Services committee hearing on US nuclear policy. We also had a Veterans Affairs committee hearing, where we heard from VA Secretary McDonough on timely care at the VA facilities and the Care in the Community program. I appreciated the opportunity to follow up with Secretary McDonough about the long wait times at the Sioux Falls VA facilities.

Classified briefings: We had a briefing on the ongoing situation in Ukraine.

Staff happenings: Some of my DC staff came out to Nationals Park after work on Wednesday to support me and my colleague, Senator Jon Tester from Montana, in Anheuser-Busch’s Congressional Brewing Competition. We made a beer called the 17 Finger Select using barley from Jon’s farm in Montana. We took home both trophies – the People’s Choice Award and the Brew Democracy Cup, which was voted on by a panel of judges.