Mark this one down in the “you cannot make this up” category.

Former US Senate Candidate Bruce Whalen, who now calls his facebook presence “Whalen for Freedom” (after losing the US Senate Primary to Senator John Thune 73% to 19%) is advertising the annual dinner for hard-right group Citizens for Liberty, which they are holding at Rapid City’s Grand Gateway Hotel, with a gathering later in the “Cheers” bar on site. 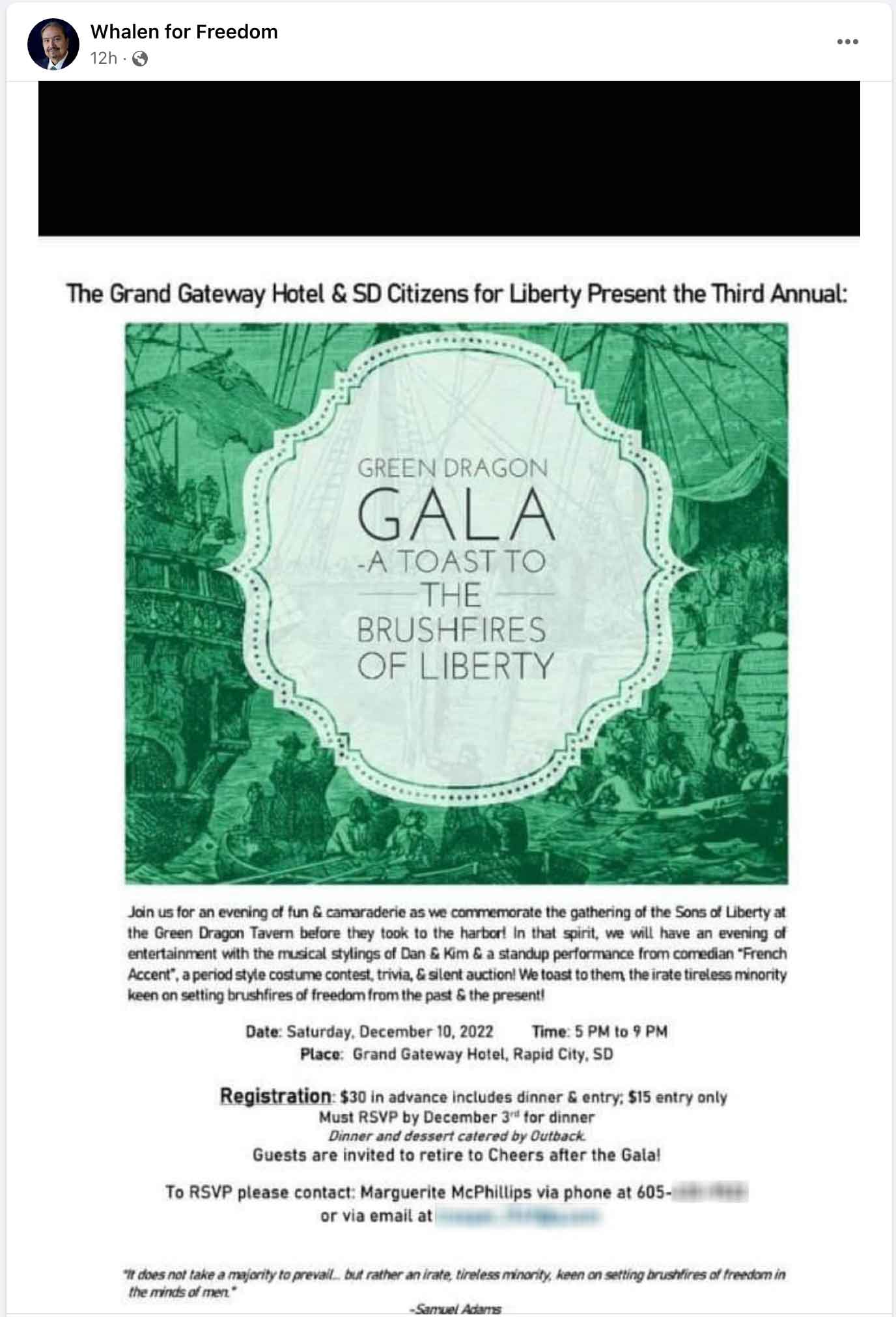 “Place: Grand Gateway Hotel… Guests are invited to retire to Cheers after the Gala!”   Why do the “Grand Gateway Hotel” and “Cheers” sound familiar?  If you recall, there was a bit of a “to do” this last year there:

A recent social media post by a hotel owner in Rapid City, S.D., announcing that Native Americans would be barred from the business after a shooting in one of the hotel’s rooms has prompted swift condemnation from community leaders, a protest and a federal civil rights lawsuit.

The owner, Connie Uhre, was upset about an attack at the 132-room Grand Gateway Hotel early on March 19 in which the gunman and victim were both Native American. She also voiced more general concerns about what she described as increasing crime in the city.

“We will no longer allow any Native American on property,” Ms. Uhre, 76, wrote on Facebook on March 20. “Or in Cheers Sports Bar,” she said, referring to the on-site lounge where karaoke takes place six days a week. “Natives killing Natives.”

The hotel is more recently subject to a lawsuit from the US Department of Justice relating to the incident:

The US Department of Justice Department is suing the owners of a Rapid City, South Dakota hotel for saying on social media and elsewhere that it would not serve Native Americans.

The DOJ says the owners’ policies and practices violate the civil rights act.

In March, an owner of the Grand Gateway Hotel and Cheers Sports Lounge posted on Facebook that Natives were no longer allowed at the hotel and bar following an overnight shooting in their building. Days after, Native Americans tried booking rooms at the hotel twice and were allegedly denied service.

“Policies that prohibit Native Americans from accessing public places are patently offensive, racially discriminatory and have no place in our society today,” she said.

You know, if they wanted to demonstrate they were for ‘freedom,’ why would they pick the hotel and bar that is the subject of a lawsuit for allegedly being the opposite.

14 thoughts on “Hard-right Citizens for Liberty group hosting annual dinner at Grand Gateway Hotel, whose owners are being sued by US Department of Justice, others for discrimination”