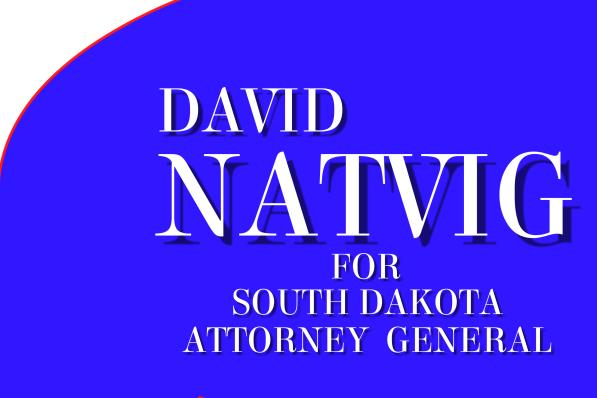 May 10, 2022 – PIERRE, SD – Director of the Division of Criminal Investigation David Natvig today announced his candidacy for Attorney General of South Dakota.

“I’ve spent my time at DCI building a strong team, making improvements and successfully combating the challenges facing the State,” Natvig said. “I hope to continue those efforts as Attorney General, combatting drug dealers, putting new attention onto cold cases, and defending the rights of all South Dakotans.”

Natvig grew up in Kimball, South Dakota, graduated from South Dakota State University in Brookings with a bachelor’s degree in Political Science, and was commissioned as a 2nd Lieutenant through ROTC.

He served as a Captain on active duty as a paratrooper with the 18th Airborne Corps at Ft. Bragg, North Carolina; was deployed to Saudi Arabia in support of Operations Desert Shield/Storm and received two Army Commendation Medals during his service. He also served as the Officer in Charge of the Green Beret Parachute team and traveled throughout the United States promoting the Special Operations Command. He also served in the Army National Guard.

Natvig returned to South Dakota and graduated from the University of South Dakota School of Law in Vermillion. Upon graduation he returned to Kimball where he served as the Brule County States Attorney from 2003-to 2019. He has prosecuted hundreds of felonies and thousands of misdemeanors across a wide range of crimes including rape, aggravated assault, and burglaries, among numerous others. During his time in Kimball he also served as the Buffalo County States Attorney and prosecuted criminal cases for the Crow Creek Sioux Tribal Courts, all while also managing an extensive civil practice through the Natvig Law Office.

In 2019, Natvig became the Director of the Division of Criminal Investigation. In that position he has sought to apprehend and pursue the prosecution of major drug dealers and criminal organizations. He was instrumental in the first T3 Wiretap conducted by state law enforcement in decades producing a case that led to cooperation with federal authorities and arrests of Hells Angels members in Minnesota and Colorado, relating to a drug and gun-running conspiracy with a Mexican cartel. He has built a working relationship with the DEA, BFI, and ATF that has led to the indictment of five Mexican Nationals who are the sources of methamphetamines, cocaine, and fentanyl in South Dakota. Two of these Mexican Nationals were recently captured and are awaiting extradition to South Dakota.

In 2021, Natvig was elected the Vice-Chair of the High-Intensity Drug Trafficking Administration (HIDTA), which consists of state and federal law enforcement from South Dakota, North Dakota, Iowa, Nebraska, Kansas, and Missouri. In this position, he fought for funding to assist in prosecuting complex criminal cases with the US Attorney’s office, which has been instrumental in hundreds of criminal indictments. This cooperation with federal partners has allowed many of these criminal cases to go federal, saving South Dakota taxpayers millions of dollars in prosecution and incarceration expenses.

David and his wife, LaRae, have four daughters and make their home in Pierre.