Had a lot of chatter and tips this week that seems to circle back to an organization I’ve recently written about, the Patriot Ripple Effect Group/Political Action Committee based out of Sioux Falls. The group is chaired by Adam Broin, with former Minnehaha GOP Chair Dave Roetman serving as treasurer and main contact for the committee. 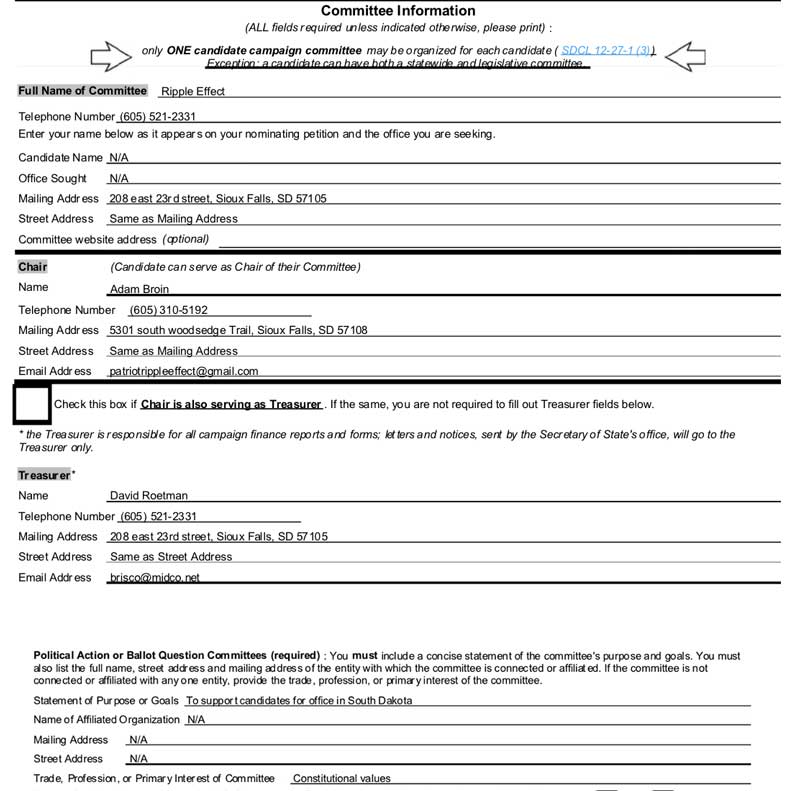 I’m told that new Sioux Falls at-large city council candidate Bobbi Andera is a very politically conservative recruit of this group in one of their first forays into finding candidates. She is running to take on incumbent Janet Brekke for one of the at-large Sioux Falls City Council spots. (City Council race watchers should also be aware that word is also that a not-so-hard-right candidate with broad based support will also be getting in the race.)

But even more interesting, I’m also being told that this race was NOT Andera’s first choice. I was told last night that she was originally recruited to run in a primary election against State Representatives Sue Peterson and Richard Thomason in whatever ends up as the reconfigured District 13 legislative district. And that information was in the wild as much as 2-3 months ago, and the switch to City Council is only a very recent development.

The word is that the intent was to try to take out Thomason because there are those who view him as not being one of the hard right members of the Sioux Falls legislative delegation. And the group has eyes on replacing several incumbents they see as not following their dogma.

Where are they coming from in philosophy? You might say that it is reflected by the Ripple Effect’s participation in the anti-incumbent rally this summer.. not to mention the COVID anti-vax protest they recently helped sponsor across the street from the Sanford Hospital.

Now that brings me up to this afternoon. In conjunction with tracking down some calls being made by one of the leaders of this group in the race for AG, I’m told that the Patriot Ripple Effect group is ALSO recruiting for Republican Party precinct positions in hopes of influencing candidate selection.

While legislative races are selected in primaries among Republicans in the population at large, this push for precinct people is a very big deal for Constitutional office candidates; those offices from Lt. Governor down through Public Utilities Commission, as those delegates are the ones who directly select those offices at the State Republican Convention which will be in Watertown next June.

In recruiting for precinct slots, with enough people they could hold sway over who wins the contested races at the next Republican Convention. Which at the moment are currently Attorney General & Commissioner of School & Public Lands.  But, there could be more in this environment of political conflict.

With precinct people, that group can also further influence races, as party committee precinct people are the ones who make the replacement selections if legislative candidates drop out of running during the election cycles. Of course, wielding that influence also continues in races in late 2022/early 2023 for county party officials.

It’s hard to guess whether the group is going to gain any traction or influence.

But, unless you are looking for the state legislature to turn into a complete sh*t show like the Rapid City School Board, it’s a good reminder.

If you want to be represented by the best candidates with broad-based support, the world is ran by those who show up.

So be a part of the solution for good government, and make sure you’re showing up. Volunteer, vote, and even better, give running for office a try.

Your community will be far better off if you do.

7 thoughts on ““Ripple Effect” group recruiting candidates for legislature & other offices, also said to be recruiting precinct people for GOP takeover. Good reminder that the world is run by those who show up.”