If you saw the coverage of the rally across the street from Sanford Hospital in Sioux Falls yesterday, there appears to be a bit of a story behind the story.

It appears that the “Medical Freedom” rally which took place in Sioux falls yesterday with State Representative Jon Hansen and Anti-Vaxxer Mya Olson was less an organic movement of concerned citizens, and more an organized political rally. At least, according to a filing with the Secretary of State from the organization that sponsored said rally.

On Facebook and elsewhere, a poster declared the march to be sponsored or at least in conjunction with a group calling themselves “Patriot Ripple Effect.” 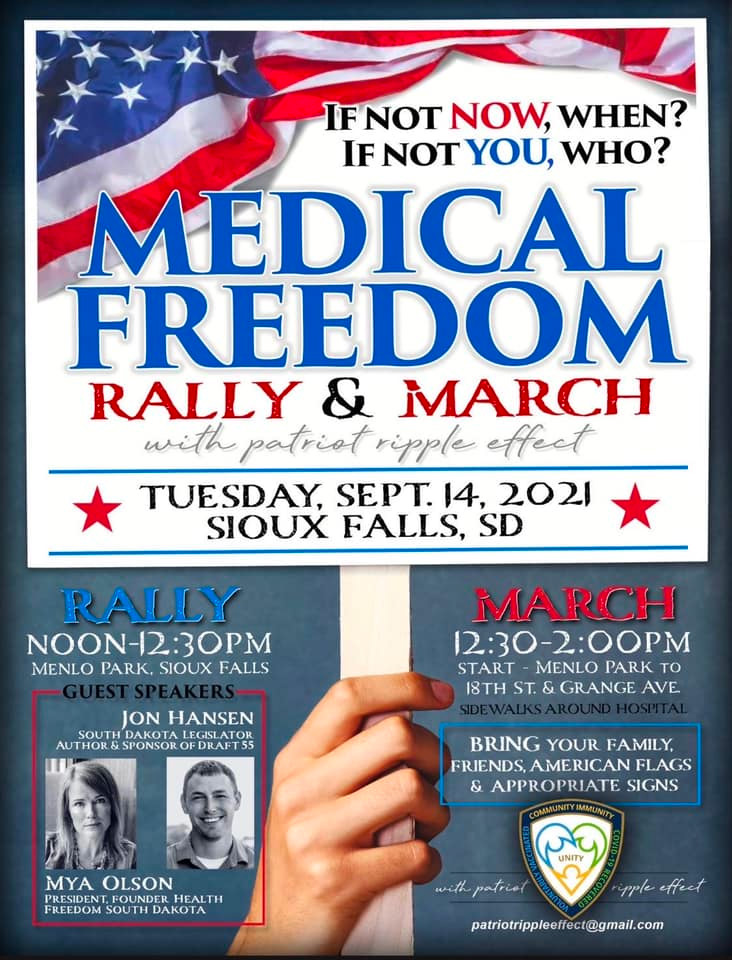 Well, ok. But who are they?   There’s not really a readily available Facebook presence or website. Just an e-mail address. But despite the flyer lacking any sort of political disclaimer, according to a June 9 filing with the Secretary of State, “Ripple Effect” actually seems to be organized as a Political Action Committee:

With Adam Broin acting as President of the group, and former Minnehaha Co GOP Chair Dave Roetman noted as the group’s Treasurer on the filing, “Ripple Effect” expressly delineates as their “Statement of Purpose or Goals” that the group exists “To support candidates for office in South Dakota.”  Which doesn’t seem to have much to do with promoting “Medical Freedom.”

But that wasn’t the first time he’s been in front of a crowd speaking about his organization. Apparently, Broin was representing the “Ripple Effect” group as part of the fringe “Primary John Thune” group’s America First rally in Sioux Falls, (ironically, Bruce Whalen cited the date of the rally as when he caught COVID).

It kind of leaves you wondering what the group is actually up to, and what the goal is they’re trying to accomplish.

The group seems to be insinuating themselves into Sioux Falls political scene on behalf of the most hard-right elements in politics. And given their participation in the Anti-Thune rally, and stated goal to “support candidates for office in South Dakota,” it remains to be seen who they’ll be promoting in the upcoming election.

So, keep your eyes open. And stay tuned.