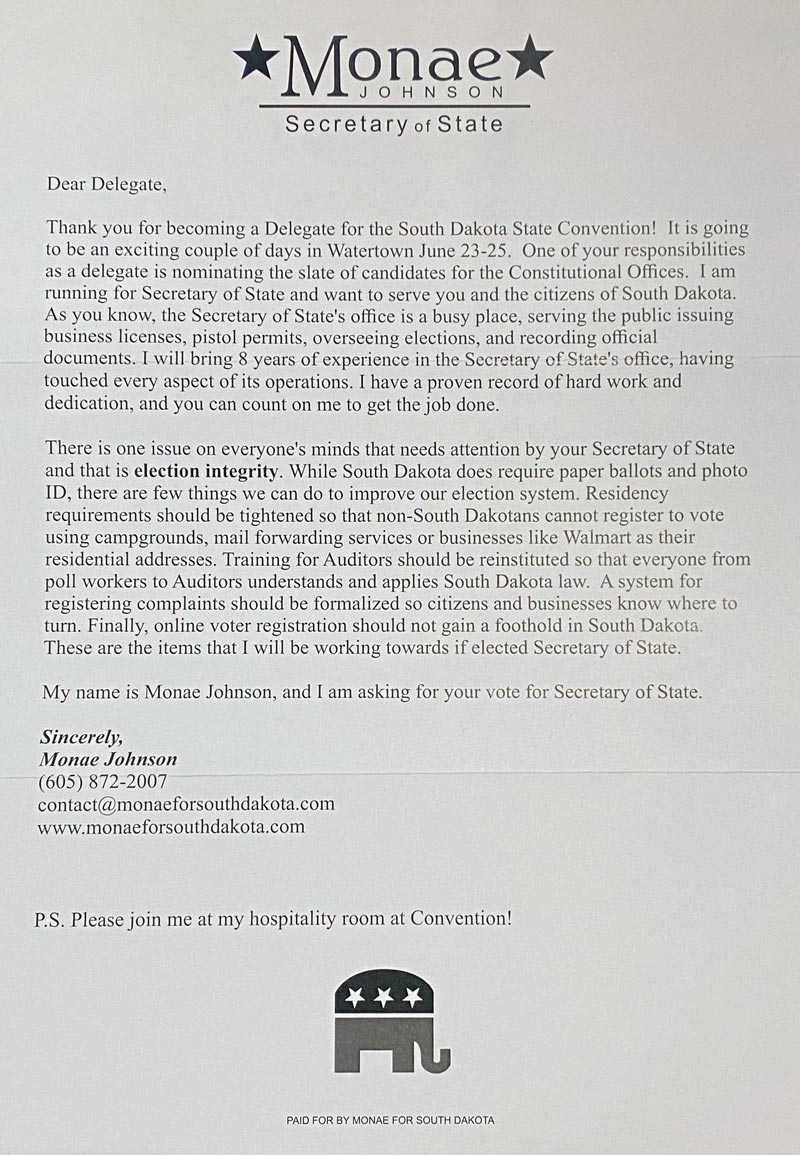 Johnson throws out the canard that “Residency requirements should be tightened so that non-South Dakotans cannot register to vote using campgrounds, mail forwarding services or businesses like Walmart as their residential addresses.”

Ugh. The problem with her platform of disenfranchising a group of people because they might travel in RV’s? It might be a trendy talking point for the “my pillow” crowd, but in her quest to strip voting rights from a group of people, she doesn’t note that it has been tried before. And courts had held that you can’t do that.

I’d written about this topic back in 2016, and the same ruling from the US Supreme Court is still out there, last I’d checked, as per Dunn v. Blumstein:

Durational residence requirements completely bar from voting all residents not meeting the fixed durational standards. By denying some citizens the right to vote, such laws deprive them of ” `a fundamental political right, . . . preservative of all rights.

This exacting test is appropriate for another reason, never considered in Drueding: Tennessee’s durational residence laws classify bona fide residents on the basis of recent travel, penalizing those persons, and only those persons, who have gone from one jurisdiction to another during the qualifying period. Thus, the durational residence requirement directly impinges on the exercise of a second fundamental personal right, the right to travel.

“[F]reedom to travel throughout the United States has long been recognized as a basic right under the Constitution.”

In sum, durational residence laws must be measured by a strict equal protection test: they are unconstitutional unless the State can demonstrate that such laws are “necessary to promote a compelling governmental interest.

Preservation of the “purity of the ballot box” is a formidable-sounding state interest. The impurities feared, variously called “dual voting” and “colonization,” all involve voting by nonresidents, either singly or in groups. The main concern is that nonresidents will temporarily invade the State or county, falsely swear that they are residents to become eligible to vote, and, by voting, allow a candidate to win by fraud. Surely the prevention of such fraud is a legitimate and compelling government goal. But it is impossible to view durational residence requirements as necessary to achieve that state interest.

The effort to preserve the “purity of the ballot box” by keeping those RV residents out has been attempted, and declared out of bounds by the US Supreme Court.  There are also those who consider these requirements to be violative of the equal protection clause.

There’s also the question of why on earth we would want to bar people from establishing residency in this state? If people who travel the country want to establish their home base here, pay license registration fees here, get a driver’s license here, after we market this state as having no state income tax, and low fees.. why would we then put up an artificial wall and declare we do not want them?

This is just bad policy. And an even worse campaign plank.

If we’re going to send someone to Pierre, it should be someone who speaks to our aspirations. Not on the basis of some ginned up xenophobia to outsiders.

29 thoughts on “SOS Candidate Monae Johnson tells delegates that if elected, her intent is to disenfranchise a group of voters”