Have you ever seen something that you have difficulty putting in words a sense of something …being askew? The Stop the Steal rally in Sioux Falls last Saturday was unlike anything I’d ever seen before in politics over the past 30 some years.

As far as I can tell, the organizers of last Saturday’s event in Sioux Falls don’t have any ties to the SDGOP organization. According to the facebook page, there were just a few people who supported Trump and they organized the rally on their own.

This was a group gathered together with the notion that in some states there may have been some issues with balloting. (And, ok, that notion could be possible, but that’s really up to those individual states to police because we shouldn’t federalize our elections).

So here was this rally in Sioux Falls rallying over alleged balloting inconsistencies several states away.. with a paramilitary group speaking and providing security for the speakers at the stage.

I’ve been to a lot of political events in the last 30 years, and I can’t say that I’ve ever experienced one in Pierre, Sioux Falls, Rapid City or elsewhere where they felt the need to have an armed paramilitary force ring the speaker for security reasons for an outside gathering in a park bandshell in January.

It’s one of those things you look at… and go “what the **** is going on?” (insert your favorite declarative expression here)

At the political events I’ve attended, there have been plenty of pro-Second Amendment people. Some with guns, and on occasion, you’ll see a person is open carrying, but no big deal. It’s South Dakota, and fairly common. But never before have I been aware of a local political event where someone felt the need for security like this, as provided by “The Proud Boys,” who have been accused of promoting and engaging in political violence.

I mean, what if someone had shown up and started shouting or being a jerk? Would they have drawn on them? Nevermind that the local police were on the scene, so it’s not as if an official response was remote and untimely if someone was going to be a pain in the rear. 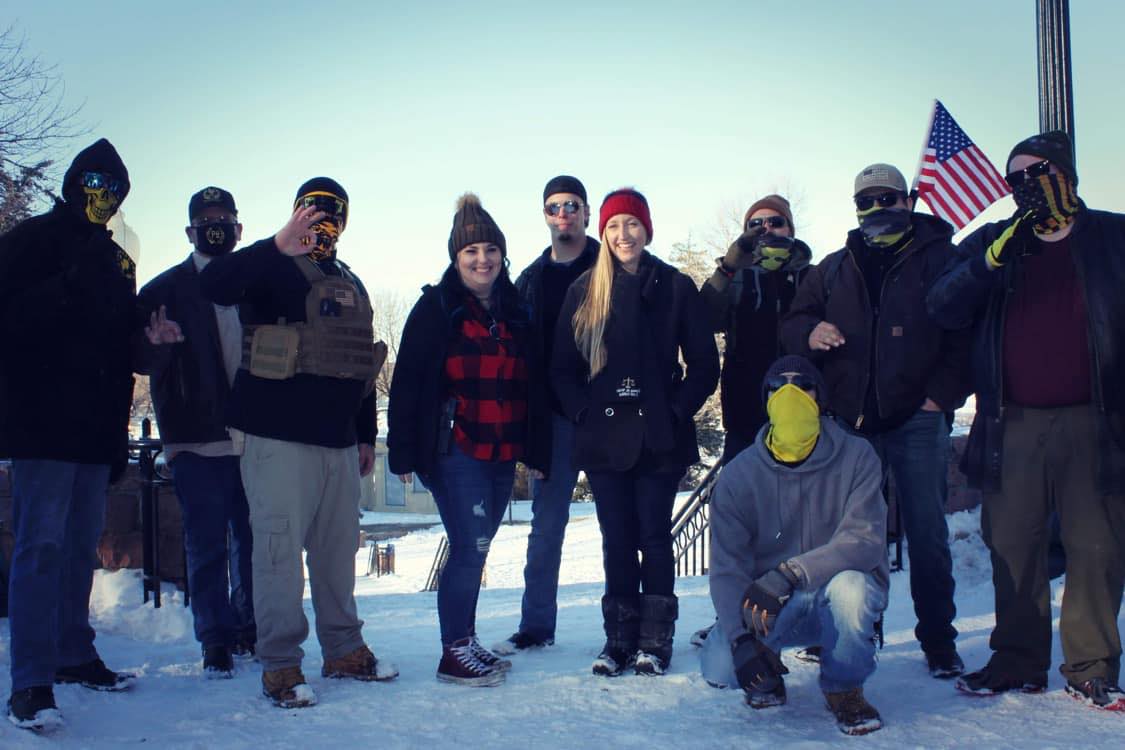 The organizers in the center certainly had no problem affiliating themselves with the Proud Boys, as you will note from the picture above with a few of them flashing a certain hand gesture.  However, while these organizers were ok with it, I don’t think any Republicans want that kind of image affiliated with the party, and I don’t think many local county GOP groups in Huron, Mobridge or Pukwana are interested in having a paramilitary group affiliated with them (as Antifa groups associate with the left) show up and ring the speaker at their dinners.

In the realm of politics, I believe there are 20% who are always with you, 20% who will never support you, making it your job to convince the 60% in the middle that you provide better leadership than the other person or group. So, when there’s a rally with that kind of imagery, it might make it more challenging to convince that 60% that you share their beliefs and gain their trust to lead South Dakota.  You actually have to convince the soccer moms and state workers to vote for you along with the local gun club members.

I have to believe that the need for this kind of thing in a Sioux Falls bandshell is as much an aberration as the attack on the US Capitol was yesterday.

Or at least, we can hope.

12 thoughts on “The Proud Boys providing security at South Dakota political gatherings isn’t going to be a thing, is it?”