There’s not much worse than a dumpster fire, and the Ellee Spawn for Congress campaign seems to be one of the most blazing hot messes we’ve ever seen. And most of this has been discovered from simple & basic internet searches that a candidate should have done on themselves before they decided to throw their hat in the ring to run for a federal office.

If an active arrest warrant for failure to appear wasn’t bad enough, the latest bombshell to come in the Ellee Spawn for Congress portfolio of bad decisions is brought to our attention in the form of a newspaper article from February 2017 that popped up in a quick Google search:

The Lyon County Sheriff’s Department reported the arrest of Michelle Spawn, 47, Sioux Falls, SD, about 1:55 a.m. Saturday, Feb. 11, following a traffic stop on 150th Street about one mile south of Larchwood. She was arrested for first-offense operating while under the influence, a serious misdemeanor, and cited for speeding and failure to obey a traffic control device, both simple misdemeanors.

It must have a heck of a celebration, as the OWI came in the early morning hours after her birthday.  According to the complaint and affidavit in the Iowa District Court for Lyon County, Spawn’s tests indicated an alcohol concentration of .151, which is nearly twice the legal limit of .08.

Ellee Spawn Complaint and A… by on Scribd

According to one online source, if a driver has a blood alcohol concentration of .150 “Balance and movement are impaired,” and “the equivalent of a 1/2 pint of whiskey is circulating in the blood stream.”

Looking in the Iowa Courts Online Search, on June 6, 2017, Michelle Dawn Spawn, whom we know to be Ellee Spawn, was convicted of Operating Under the Influence 1st Offense, and sentenced to 180 days in jail (178 days suspended), and fined $1250. A charge for failure to obey a traffic control device was dismissed, and she also paid a $140 fine for speeding.

While Spawn was convicted of an OWI first offense in Iowa, it actually represents her third conviction of being impaired while being behind the wheel (see my previous article for her list of aliases). 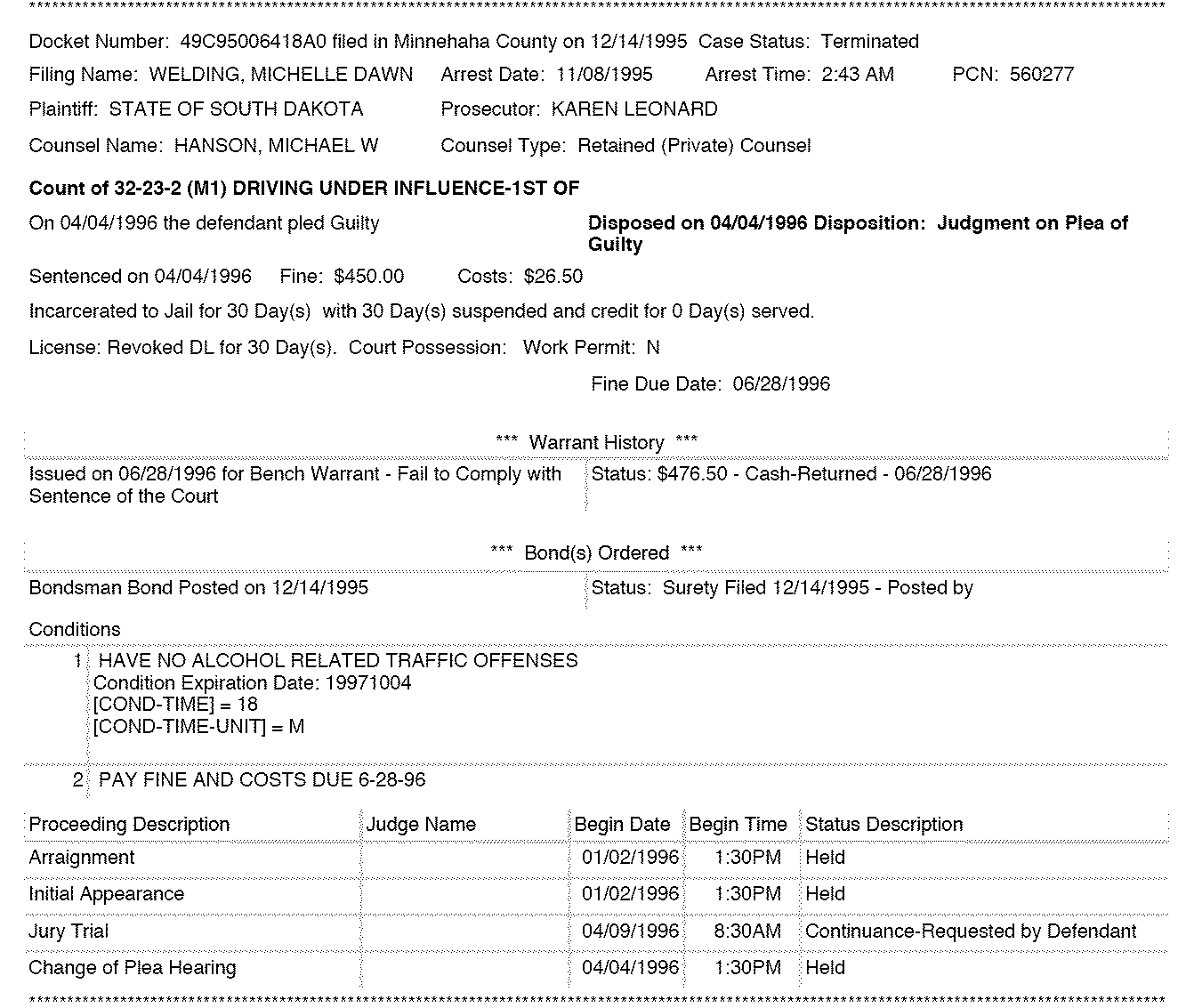 South Dakota UJS records indicate that Spawn had  previously been prosecuted and pled guilty to Driving Under the Influence in April 1996 in a case that had a further Bench Warrant Issued on 06/28/1996 Failing to Comply with the Sentence of the Court. For this offense, Spawn was sentenced to 30 Day(s) with 30 Day(s) suspended, and a $450 fine.

Unfortunately, Spawn found herself back in trouble in May of 1997, charged this time with Driving Under the Influence 2nd offense in South Dakota (as well as failing to maintain financial liability, and no driver’s license.) 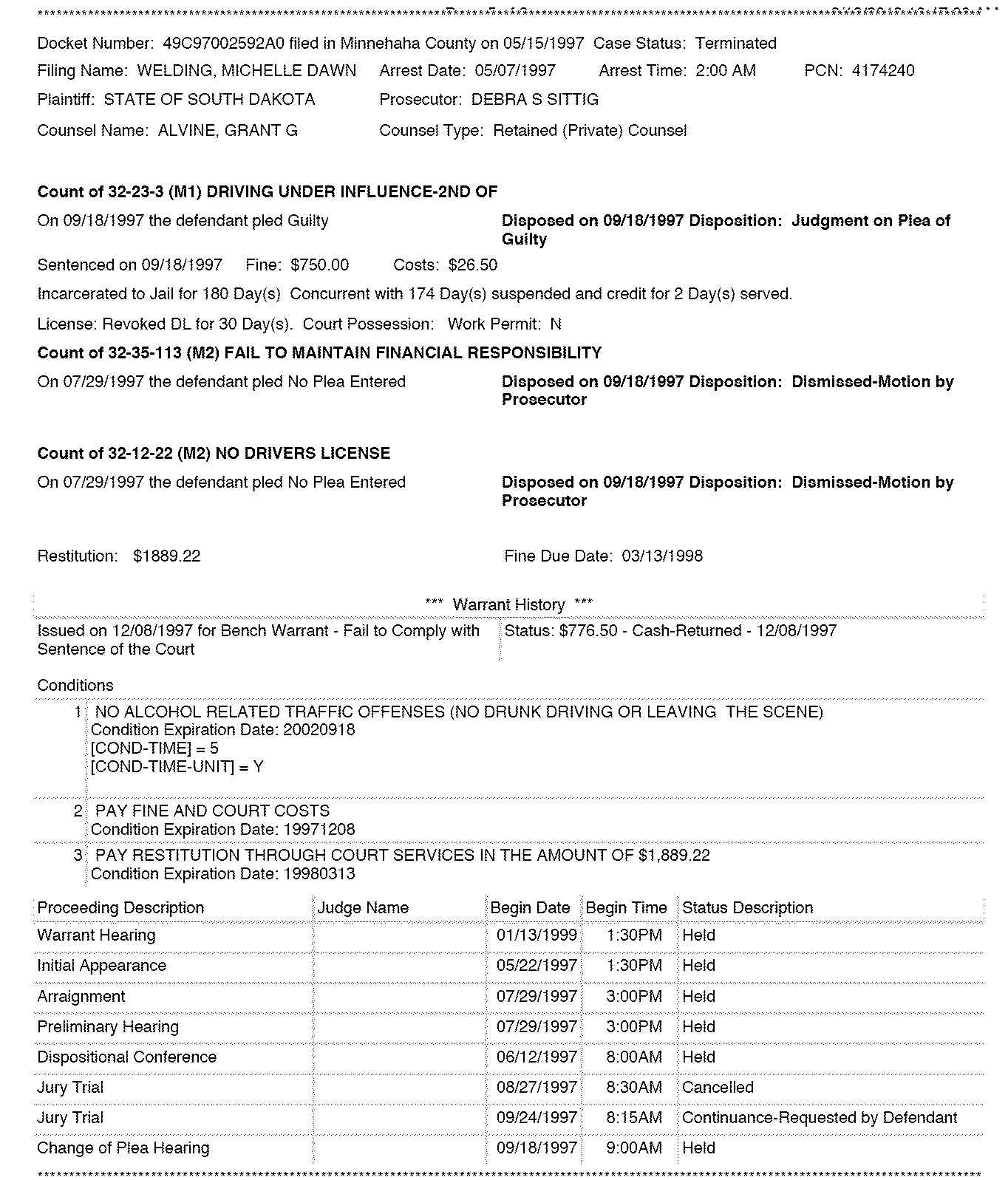 Fined $750, with $1889 restitution and sentenced to1 80 days in Jail, she had 174 days suspended, and was given credit for 2 days served.  And again, her case was complicated with a bench warrant that was issued for failing to comply with the sentence of the court in December 1997.

In South Dakota, A DUI is considered a first offense if the offender has no prior DUI convictions that occurred within the past ten years, allowing Spawn’s DUI clock to be reset for any future offenses. Hence, the first offense in Iowa between 1997 and 2017.

This likely set her on the path for the driving while suspended & revoked charges in 2018 – charges that she has ignored to her peril, setting up bench warrants and an active warrant out for her arrest.

Having to explain driving under the influence twenty years ago when she was 27 would be embarrassing enough for any candidate, but further complicating it by driving under the influence just 2 years ago at 47, followed by a string of driving while suspended charges, bench warrants, and an actual active arrest warrant for failing to appear on those charges is inconceivable for a statewide candidate for federal office.

Unless you’re a South Dakota Democrat. Because beggars can’t be choosers.

In that case, Spawn is having a fundraiser/meet & greet at 5:30 in Pierre tonight.

That is, unless the local gendarmes find her first.

12 Replies to “Democrat Congressional Candidate Ellee Spawn arrested & convicted of operating a vehicle while under the influence three times, most recently in 2017 in Iowa”