With the Federal Elections Commission audit of the South Dakota Democrat Party taking center stage in tonight’s news stories, there were a point that the audit brought up as an item of concern that was somewhat reminiscent of a recent issue that came up with FEC Reports filed in recent months by the State Democrat Party. A point that might bear further scrutiny.

In the audit that was reported on today, the Federal Elections Commission noted the following problem as one of their findings:

The FEC cited that the “SDDP failed to disclose debts and obligations to nine vendors, totaling $46,097“in the 2015-2016 election cycle.  And this particular finding in the SDDP books during the Tornberg years may need further scrutiny from the Federal Elections Commission.

Why do I bring it up?  Because in May of 2019, South Dakota Democrats had a month when they filed significant expenses as part of their FEC Report. And after the extreme spending was brought up by the South Dakota Republican Party, the expenses just “went away.”

Flash back to May, and an article I wrote for SDWC:

But the most shocking line item comes under the Debts and Obligations Owed by the Committee, noting Democrats have a debt load of $46,863.72 – a shocking $30,239 of deficit spending by the State Democrat Party.

Who do Democrats currently have unpaid bills for?

The Sutton Group of Silver Springs Maryland has an outstanding bill of $11,983 with the party. According to past records with Hillary for America, they do event production, possibly some computer work as well.

Their annual diner still has them owing the Sioux Falls Convention Center $5845. They owe DC Law Firm Sandler, Reiff, Young & Lamb, PC $2400. Qualified Presort of Sioux Falls is also waiting for a bill of $1342.82 to be paid by the Democrats.

Panther Graphics is holding out for over $7200 to be paid, Mailway Printers is stuck waiting for $4545.10, Their payroll/bookeepers at Limestone, Inc are patiently waiting for $1622, and Laura Platt Promotions is likely hoping South Dakota Democrats will hurry up and pay the $10,523 bill they owe her for consulting/printing.

South Dakota Democrats have traditionally held most of their kitty in their federal account, so to see it drained to what is normally less than one month’s operating costs and to have such a massive pile of debt is not a good thing for the party as a new chair walks in the door.

Read that (and read the accompanying FEC REPORT) here.

Here’s page 2 of Democrat’s original report filed May 20, 2019 for their April spending: 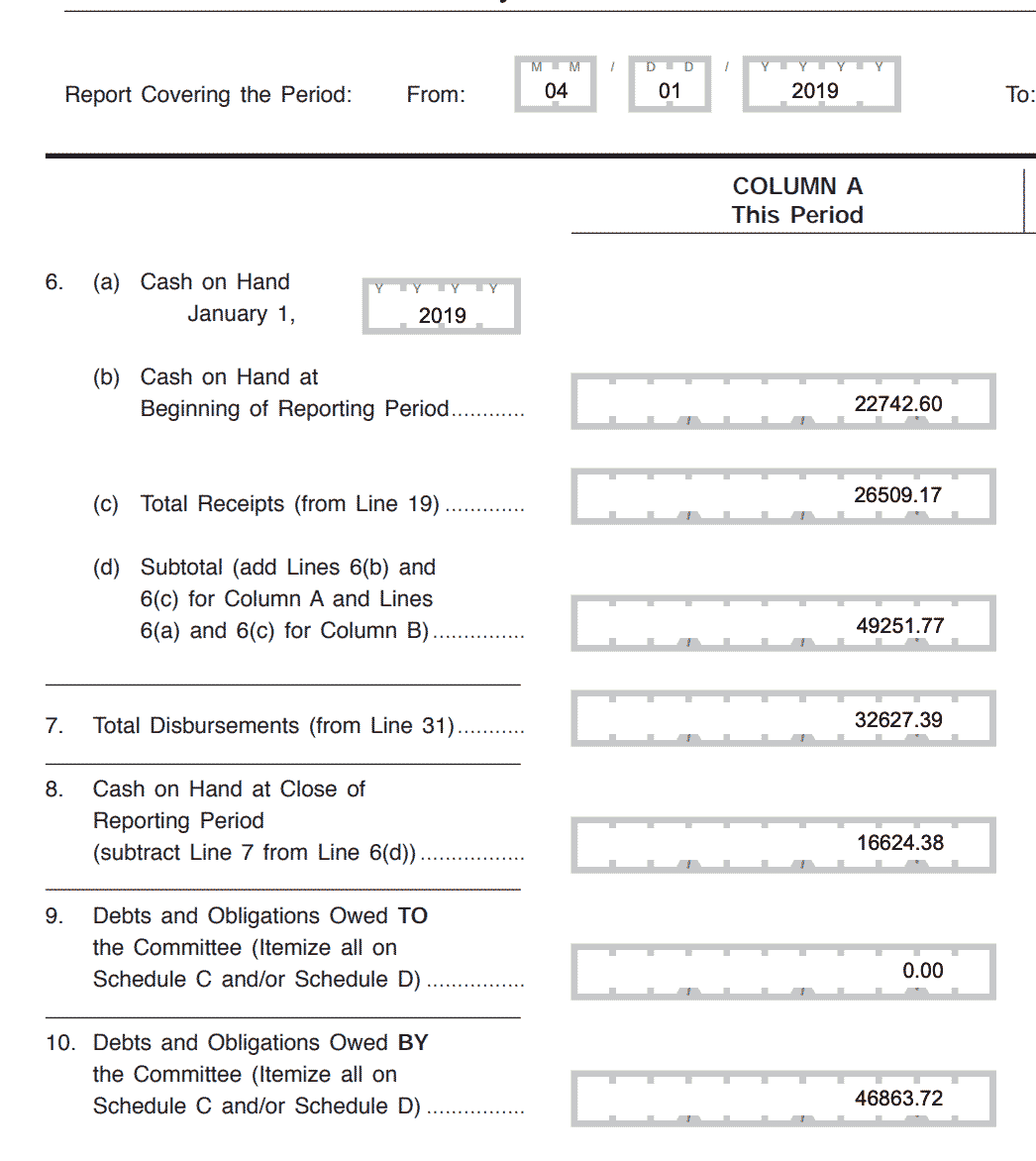 This shows that South Dakota Democrats filed that they had outstanding unpaid debts of nearly $47,000.

Shortly thereafter, the South Dakota Republican Party sent out a press release encouraging South Dakota Democrats to pay the local vendors they owe money to first, before the Washington DC consultants.  And then an interesting thing happened on May 21st. An amended report was filed. 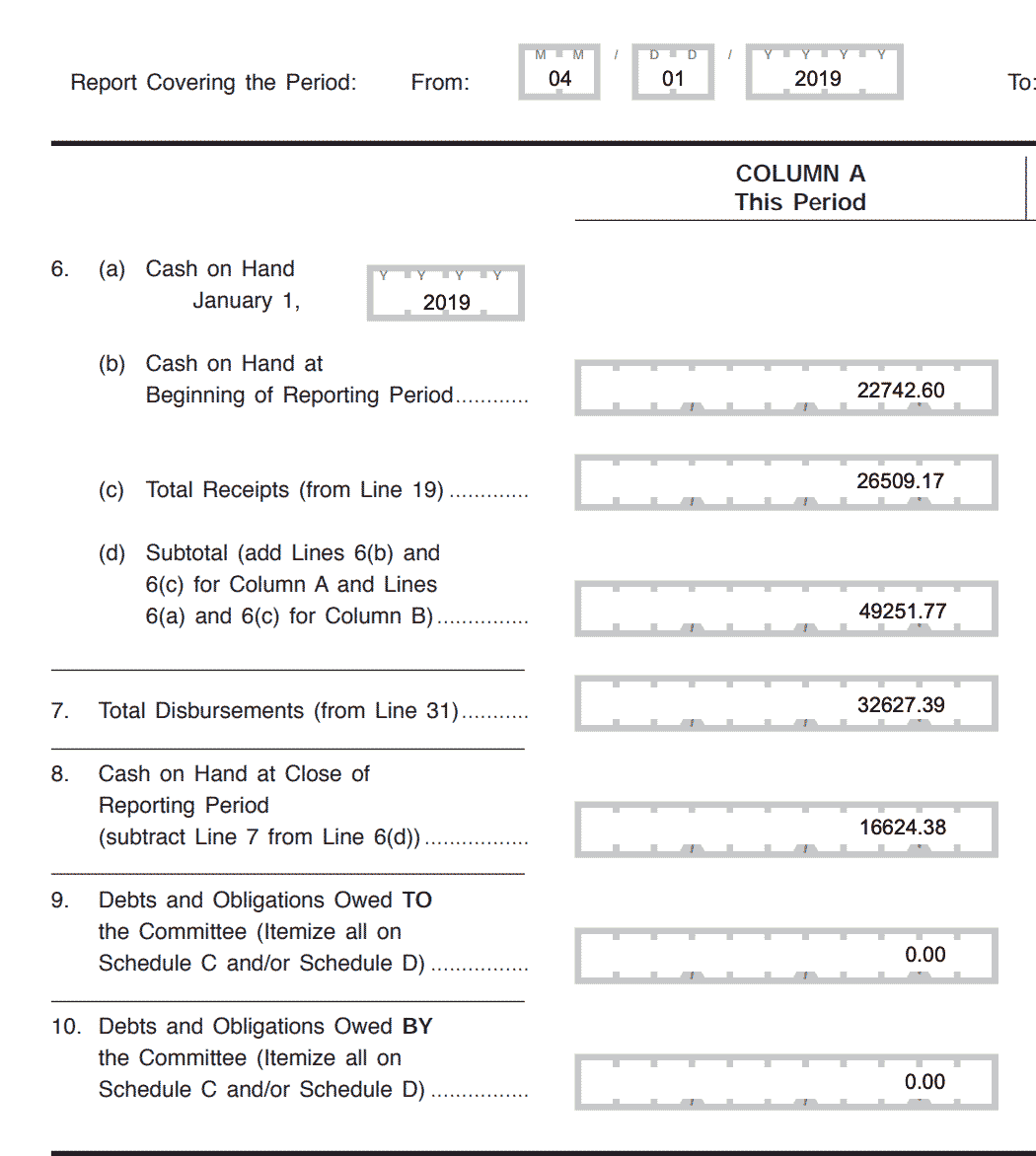 All of a sudden after the GOP criticized them for their unpaid bills, Democrats made $46,863.72 of outstanding debt on their monthly FEC report somehow and somewhere go *poof*.

Nobody really called them on it. They just filed an amendment that there was no debt, despite the prior report. And they moved on. With no explanation.

With the Federal Elections Commission finding that South Dakota Democrats were playing fast and loose with their campaign finance reporting in 2015-2016 the “SDDP failed to disclose debts and obligations,” I can’t help but question the massive change from the reports filed from one day to the next in May.

With nearly 47k of debt on the books one moment and gone the next, once the FEC gets done looking at their books for 2015-2016, it might behoove them to keep on looking.

Because at least on the surface, it sure seems to a reasonable person that something strange was going on at Democrat headquarters past 2016.