I caught this tidbit the other day as South Dakota Democrats started examining their performances and pointing fingers after their performance on November 8th noting their fortunes have not changed as once again the GOP hammered them up and down the ladder in South Dakota. As noted at the Democrat blog SD Standard..

SDDP Chairman Randy Seiler chose not to challenge his friend Marty Jackley for attorney general, allowing Jackley to return to his old job without a contest. Seiler plans to retire, leaving the state party in flux yet again.

At the same time they feel they have to bring up Randy not running for Attorney General because Marty Jackley is a friend, they pointed out that he’s planning to retire. After Seiler financially righted their ship, including putting his name on a loan, that statement is not exactly dripping with gratitude for taking on a nigh-impossible task. There isn’t much discussion as to who is interested in taking over the position, as they face the same challenges that the past few Democrat Party chairs have faced, and even if they’re registered that way, not many people want to identify with the Democrat Party, much less run as a candidate championing their views.  What are those challenges?

#1 – While Democrats have focused on ballot measures, no one has been doing any party building. 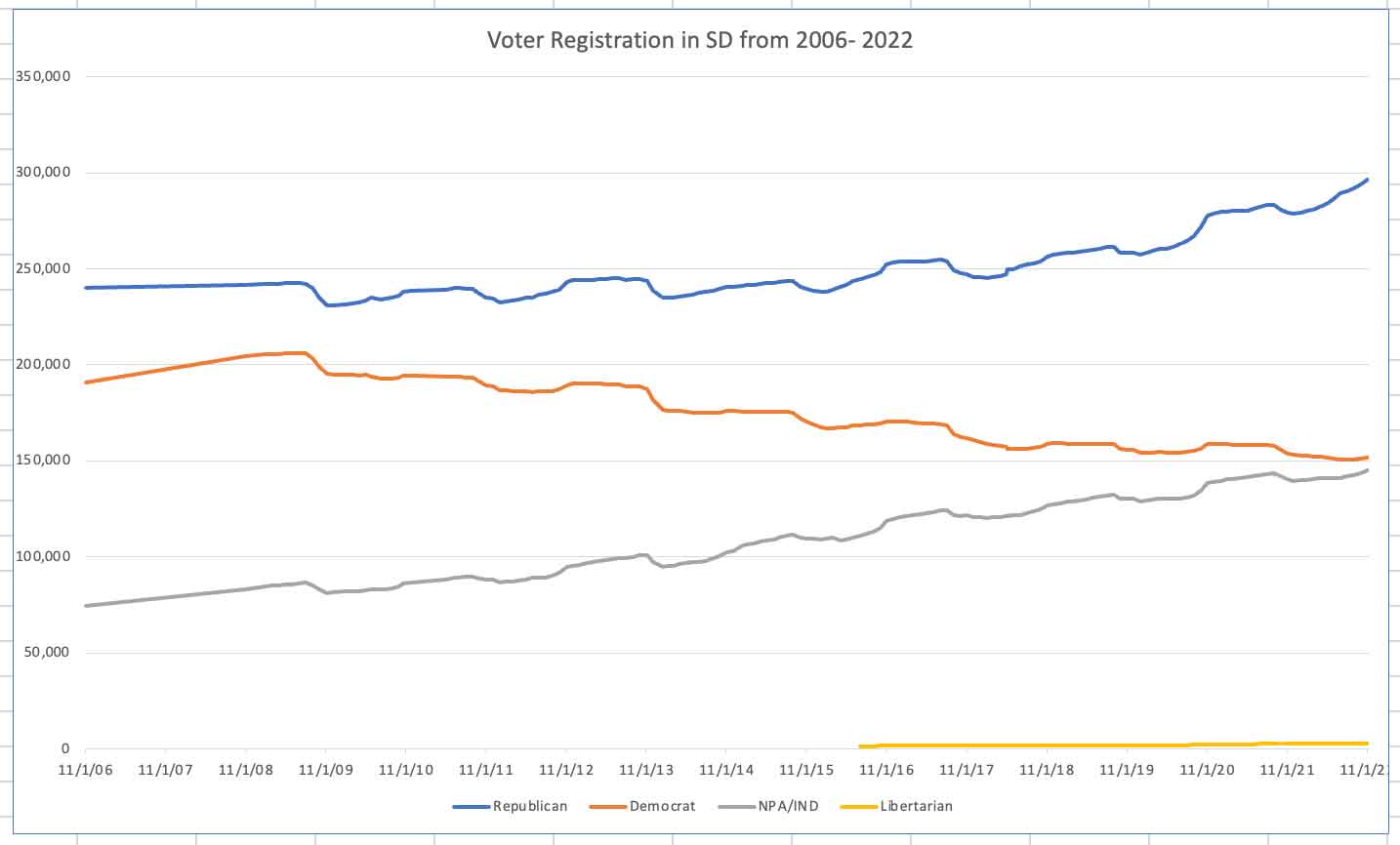 That chart is not what Democrats are wanting to see. As of today, Democrat registration is outpacing Independents by only 5900 voters. Compare that to 2006, there was a gap of over 116,000 voters. How do you lose 110,000 voters? On an annual basis, that’s losing a little less than 7000 voters a year, but over time it adds up until you’re in big trouble. At this rate, at some point in 2023, maybe early 2024, Democrats will be third behind independents.   During the same period of time, Republicans have gained 50,000 voters.  Now, it would be nice if the GOP could grab a bigger share, but it’s less critical for us as we’re trending in the right direction while Democrats are headed for a major crash.

For a couple of decades now, Democrats have put their eggs in the basket of ballot measures, feeling that will help them with lists and recruitment. If they haven’t figured it out by now that was and continues to be a fools’ errand. People aren’t going to switch parties on the basis of one issue, whether it’s pot, abortion, teacher pay, etcetera.

Disagree? Don’t take my word for it, look at the squiggly line in the chart.

#2 – You are guaranteed to lose every race you don’t field a candidate for.

In April of 2022, Democrats left a staggering 23 Senate seats uncontested. 23! Literally, they abandoned even running for over 65% of the Senate seats available.  Democrats were slightly better in the House races, where they skipped nine House seats at the time. They ended up losing several more because a number of their candidates were just placeholders who dropped out.

Let me remind you what Democrat Leadership had to say about that:

“I think we would always love to have more candidates,” Berk Ehrmantraut, the South Dakota Democratic Party Executive Director, told KELOLAND News. “I think we’ve set ourselves up to be really competitive and pick up some seats this year in the legislature.”

While Democrats will leave 23 Senate seats and nine House seats uncontested, Ehrmantraut said having more than 50 candidates for state Senate or House was in the range the party was aiming for.

Abandoning 23 Senate seats is “competitive?” I don’t really think so. The term I’m more apt to use is that it’s a total ****-show.  When they say they were set to pick up some seats, it ended up that a House seat was traded for a Senate seat to maintain net numbers of Democrats across the entire legislature, granting Republicans continued and total dominance.  Democrats need to actually pay attention to recruiting more than just talking their current crop of interns into running until they find someone better.

#3 – Who exactly is the base of the Democrat party in South Dakota? Because even they don’t seem to be sure.

I can tell you that the South Dakota Republican Party is very glad to focus on issues of agriculture, ethanol, seniors, workforce, etc., while Democrats focus on pronoun use, drag shows, and protests that devolve into riots. It’s like they don’t know who they want to represent. Remember when Democrat Taneeza Islam went after bonus pay for city employees in the last Sioux Falls Mayoral Election? She raised the ire of South Dakota Federation of Labor who blasted her. You know you’re in trouble as a Democrat when the labor unions go after you.

Don’t forget Democrats’ fading memories about people who go to church, as in their platform plank this past year where they attack religion noting “we respect individual conscience and we will not allow religious ideology to infringe on one’s basic human rights.” You have to go out of your way to take a dig at “religious ideology,” and Democrats are happy to do so.  It’s as if they have forgotten the very people who once made up their base in South Dakota, abandoning those people and their values in favor of a national woke agenda.

Democrat politics as of late seem to focus mainly on more urban areas to the exclusion of everything that’s not focused on young people in Sioux Falls. While Democrats have gone woke, Republicans have been able to make inroads into areas Democrats once had exclusive control over. District 1 which contains the Sisseton-Whapeton Oyate is not just represented by three Republicans, but part of that group are two House members who are both Native American, a group that Democrats once enjoyed the exclusive support of. Democrats are in really big trouble if Republicans can continue to make inroads into the state’s Native American population, which we will. Faith and family are very important to large swaths of the GOP and Native Americans alike, and there are issues they can and will continue to find common ground on.

If you think about it, the last Democrat officeholder who successfully navigated the traditional Democrat constituencies in South Dakota was arguably Stephanie Herseth Sandlin. But even she eventually succumbed to the combination of a wave election, as well as members of her own party directly throwing her under the bus for trying to navigate the minefield between traditional old-school Dems and the cadre of the woke. While some Democrats may reminisce about her time in office and long for thoughts of her return, they’re forgetting that they only narrowly averted a primary challenge against her from the left, prior to her being voted out of office.

Their basic problem is that Democrats need to figure out who they want to represent and why.  As noted by one, apparently reluctant Democrat at the onset of the election..

Heenan, who ran for a spot on the Pennington County commission as an independent in 2018, said she reluctantly switched from an independent to Democrat a month ago. She said the national tone of the Democratic Party is not applicable or appropriate to South Dakota, but said running as an independent for state office was not efficient.

That’s a pretty good summary. Do they want to be a party representing South Dakotans who vote, or the people who make tiktok videos all day? Because the latter isn’t putting anyone into office, and it is turning people off.

Until the South Dakota Democrat party is willing to pay attention to business of a state political party, actually run candidates, and represent the viewpoints of the residents of South Dakota, I don’t think they’re going to change their fortunes, and be competitive in state elections.

Think there are other reasons for the Democrat party’s steep decline in the state and what they need to fix? The floor is yours.

8 thoughts on “Reports that Democrat party to be cut from moorings again and left rudderless as Seiler notes departure. The Democrat Party continues to be in serious trouble in the state.”