Senate Bill 6 introduced earlier this legislative session garnered a little media attention as one of this year’s first measures addressing the topic of abortion, specifically with regards to its intention to force women to look at a sonogram of their unborn child as a condition to receiving an abortion in the state.

When discussing the measure, State Senator Stace Nelson believes that women should be forced to look, because it’s just like him looking at his foot before surgery:

Right now, doctors offer patients seeking an abortion the option to view a sonogram or listen to a heartbeat if one is present. If Senate Bill Six passes, these both would be a requirement.

“These are laws that are effective in lowering the abortion rate and protecting unborn babies because pregnant mothers are able to receive factual, scientific information,” said Republican State Senator Stace Nelson.

“For example, I had surgery several years ago where they operated on my foot, and before they did that, they did extensive imaging of it and they showed it to me and they explained to me what the surgery was going to entail,” said Nelson.

However, it might not be as simple an act as the measure’s sponsor contemplating his foot.  On the South Dakota Right to Life website one of the state’s long-time conservative groups has adopted a position far different than what you might expect: 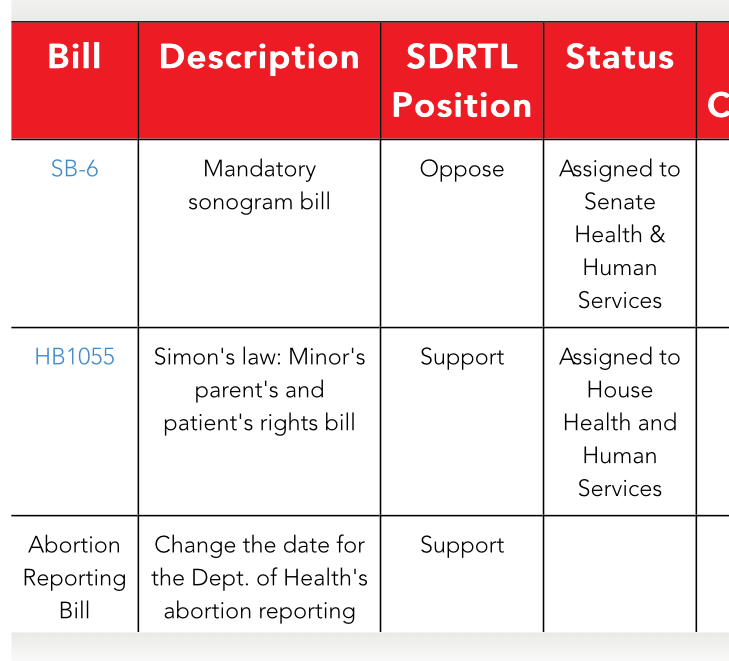 On the measure that’s been assigned to Senate Health and Human Services, South Dakota Right to Life has announced that they will OPPOSE Senate Bill 6.   Nothing definitive as to why yet, but I suspect no one bothered to ask the state’s leading pro-life group what they thought, and they know up front that the measure is fatally flawed.  (Generally, SDRTL knows from experience when they see a dog that isn’t going to hunt. )

I’m sure it will make for interesting listening when Senate Health & Human Services meets on the measure.