Add another primary to the list. And it’s an important one. Because as of this afternoon, for the 5th(?) 6th(?) election in a row, I have once again been primaried for my precinct committeeman job.

I thought for a moment I was going to get off easy, but, apparently not. Probably need to dust off the old materials.. 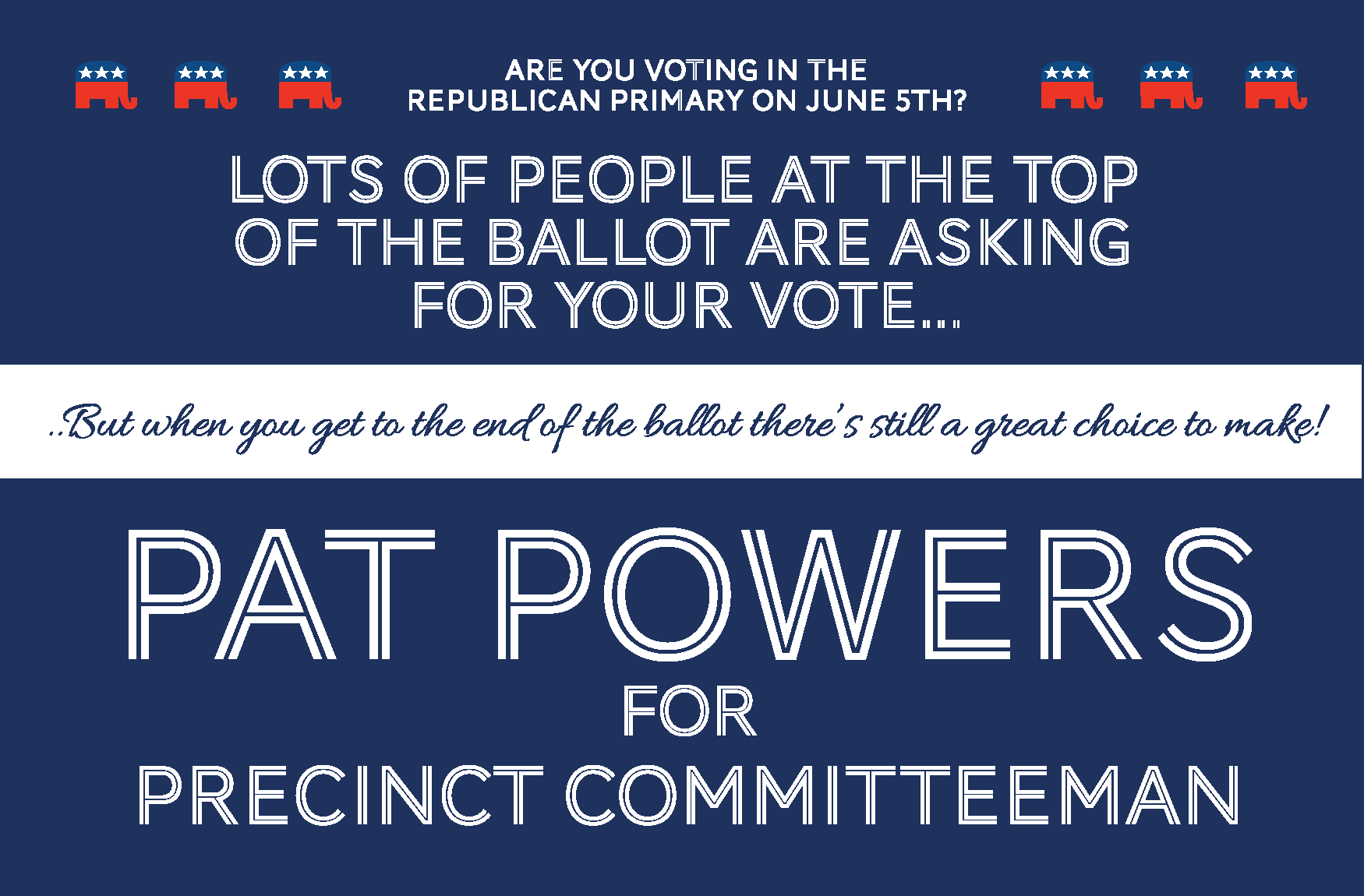 I found the figures for the last few elections. It looks like I’ve got some work to do if I want to move some numbers.

I picked up a vote.. but my overall percentage is down.

After a high point in 2018, it looks like I’m slipping a bit to my 2016 vote totals. It must have been COVID keeping my voters home. (I wonder if they can do facebook geofencing down to a precinct level?)

PIERRE, S.D. – Today, Governor Kristi Noem announced that the state has taken possession of a 2015 King Air 350 after an extensive, nationwide search. Combined with the sale of two state-owned planes in 2021, the deal saved the State of South Dakota $3.31 million compared to what had been budgeted. The savings will be reverted to the State General Fund.

“It’s our duty to be good stewards of taxpayer dollars, so my goal from the beginning was to purchase the best plane for the state’s needs at the most affordable cost. We achieved that,” said Governor Kristi Noem. “This plane is newer, safer, and will save the taxpayers money in the long run in maintenance costs.”

In 2021, the legislature appropriated $5 million, plus the proceeds from the sales of the King Air 200 and one King Air 90, for the purchase of a new plane. The State retained the services of aircraft broker Verity Jet for $195,000. The net proceeds from the two planes were as follows:

Despite having nearly $8 million available for the purchase of a new plane, the Department of Transportation secured a much newer King Air 350, including all upgrades for just $4.7 million, and the state took possession of that plane last week.

Additionally, purchasing a newer plane saved the state at least $1.5 million in pending maintenance costs on the two planes that have been sold.

Not much information was out there at the time, but in the past week or so, a placeholder image has been put up on a website which speaks volumes about her campaign platform:

At least from the image, it appears that Johnson is running on the issue of “election integrity.”  Which is an issue we’ve heard much about in the last year. The bigger question is how this challenger for the office will be defining it?

Will it take on a benign form, such as voter ID?  Or will we be going full pillow guy goofy, as some candidates are?

I guess we’ll find out.

From the Noem for Governor campaign (you know, the one that actually sends out press releases and informational items):

Governor Noem, the number one defender of the 2nd Amendment in the country, is recognized as a leader in promoting hunting, public access and conservation. “Less COVID, More Hunting” is her famed slogan as she leads our state in conservation heritage and against government overreach.

In her State of the State address, Governor Noem proposed the elimination of all fees for concealed carry permits. South Dakota will also pay the cost for the federal background check. Under her proposal it won’t cost a penny to exercise 2nd Amendment rights in South Dakota.

In announcing the award, Safari International CEO W. Laird Hamberlin said, “No Governor has fought more to protect our hunting traditions, and we cannot wait to recognize Governor Noem as we celebrate SCI’s 50 Years Of Freedom.” 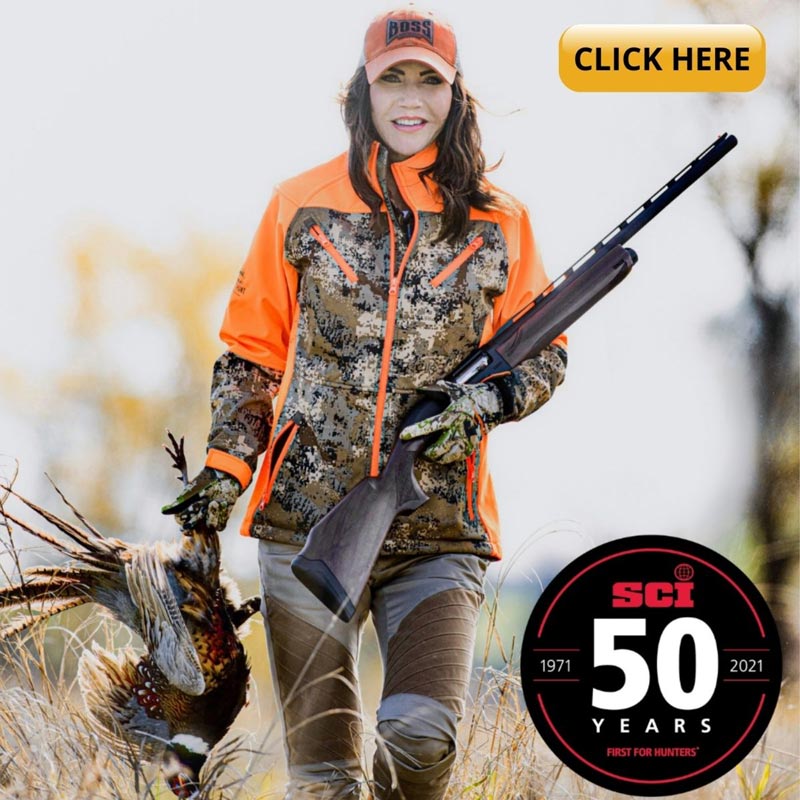 Just over 60 days out, March 29th is a big day coming up in the South Dakota political world. This is the deadline under which partisan political candidates are operating to turn in petitions for office. It’s a scramble that’s begun in pursuit of the highest offices in the state where many are collecting petition signatures.

But for two of the highest offices, Congress and Governor, there is nothing but an endless void. Democrats have yet to announce a candidate, and they are literally running out of time for their people to collect the nearly 1800 signatures needed to place their person on the ballot:

As the calendar pages turn, lacking a person willing to run for office on the Democrat ticket, it makes it far more challenging to organize volunteers to get out to collect signatures.

Remember last election when they had two congressional hopefuls? They had willing and running candidates much earlier in the process, and they still lacked the ability to collect the signatures to get on the ballot. Now with the time to collect 1/3 of the way gone, even if they can find someone, it’s just that much more challenging to get the job done.

This means that Congressman Dusty Johnson could get a historic second bye in the race for Congress, once he handily disposes of Taffy Howard in the primary.  And even more shockingly, Democrats seem currently on track to give Republican Governor Kristi Noem an unobstructed path to a second term as Governor, once she bypasses the Haugaard for Governor primary campaign.

If Democrats did not have former Independent Brian Bengs switch parties to run as a Democrat, they would likely be including US Senate in the number of top of the ticket races they’re seemingly abandoning for lack of a candidate.

The clock is ticking. And for Democrats, time is nearly up.

A few new candidates popped up this last week, and I’m sure we’re going to be adding a number more in the morning. But, until we see those filings..

In District 2, Republican Jeff Shawd entered the ever-growing primary for State House, bringing that number up to 4 running for 2 seats. Nice guy, VP of Mid States Audio. Former association with Oath Keepers (which ended in 2016) might be troublesome. He’s currently associated with the Prairie Patriots group.

In District 7, Republican Mellissa Heermann announced she is running for District 7 House, bringing that race up to 3 people (Rep. Tim Reed & Matt Doyle) Heerman is coming off of the School Board to run, and she’s been the mayor of Estelline, so she’s not unfamiliar to campaigning.

In District 14, Republican Gina Schiferl filed a statement of organization to run against Rep. Taylor Rehfeldt and Senator Mike Rounds staffer Tyler Tordsen. I don’t think this will end well for Schiferl, but it’s a free country.

In District 17, Republican Chris Kassin filed a statement of organization to run for the open House seat. He and previously announced Bill Shorma will be the people to beat in this race. Kassin is VP for External Relations at the USD Foundation, and a former Assistant Coach for men’s basketball for USD.

In District 29, Senator Gary Cammack filed petitions for the House, after term limits took him out of the Senate.

In District 30, Pat Baumann filed a statement of organization, and announced he’s a candidate for a growing District 30 House field with Trish Ladner, Lisa Gennaro, Dennis Krull, and whoever else might be running for the two House seats in that District.

Have I missed anyone since last Monday?

So, gubernatorial challenger Steve Haugaard has gone ANOTHER week without any attempt at earned media/press releases (40 days and counting, since December 15).

Which I have to say doesn’t surprise me. Because, his campaign seems to be making a number of basic mistakes.

For example, Representative Haugaard shows up at the county Republican meeting here in Brookings a week ago, with his people, and sits at a table with 20-30 County Republicans. He has a big stack of his campaign material in front of him.

Except.. he never distributed it.  He didn’t hand any out to the group. It sat there in front of him the entire meeting, and it remained with him as people departed.

I guess it was our job to tackle him to find out more?

It’s was kind of interesting that the same ‘campaign person’ who was with him in Brookings – Dennis Fusaro – was also with him at the Capitol a few days ago for “Republican Day at the Capitol.”  Which brings up another mildly humorous tale.

Anyway, so the State Republican Party has GOP Day at the Capitol last Friday, which includes tours of the Governor’s residence for College Republicans, Republican Central Committee members, etc.

But apparently, as I’m told from attendees, they also had Haugaard’s paid employee/consultant/whatever tagging along and in the pictures from the GOP group (He’s the guy with the ankle cart): 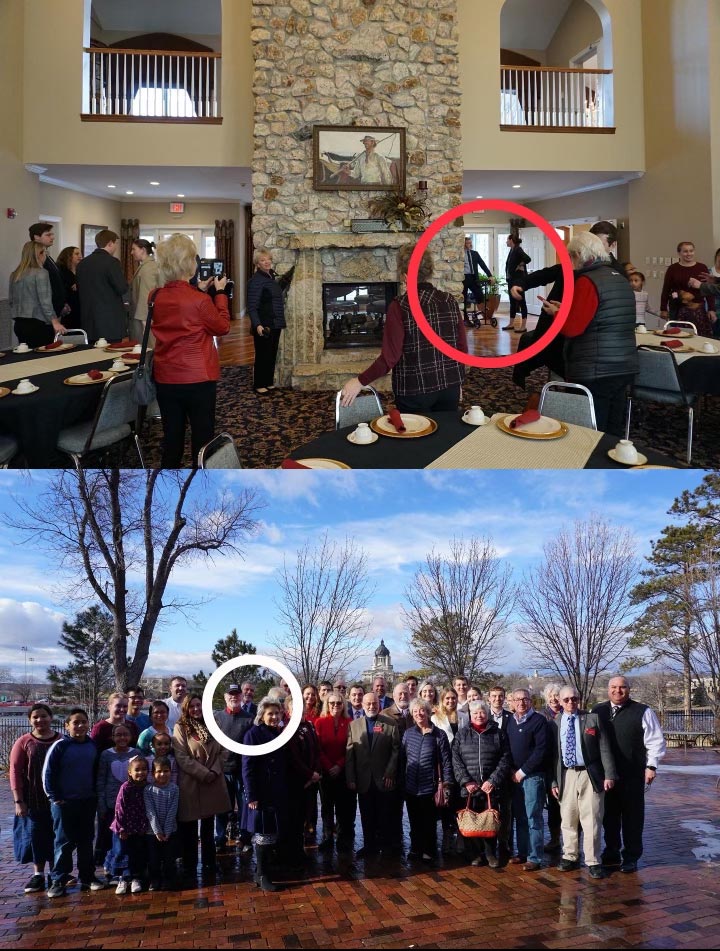 And you know, that’s probably a good thing he tagged along.

Because this was probably the only chance for Haugaard’s campaign guy to ever see the inside of the Governor’s residence.

At least, given Steve’s performance at campaigning.

District 3 could have an entirely new team representing it in the State House after November. Because a 4th Republican has now joined the House race: 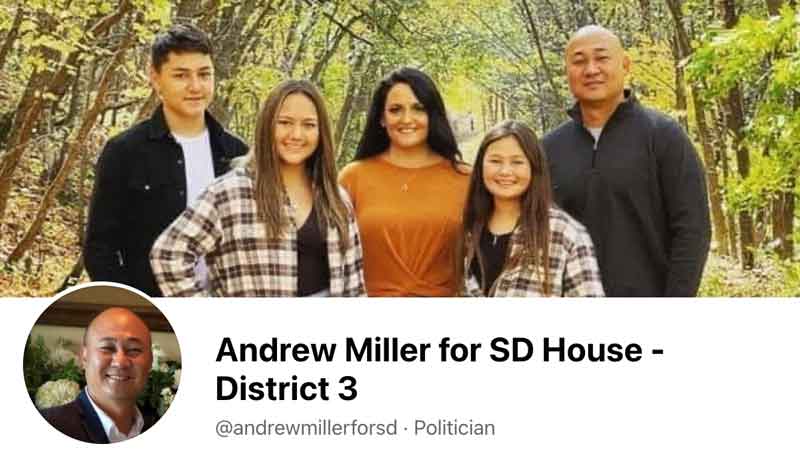 Andrew Miller, currently a member of the Aberdeen School Board, is joining incumbent State Rep’s Carl Perry and Kaleb Weis, along with new candidate Rick Rylance in a now 4-way primary for the two seats in the State House for District 3.

No Democrats have announced for the contest at this time.

WASHINGTON—U.S. Sen. Mike Rounds (R-S.D.) today made the following statement after receiving an “A +” rating from the Susan B. Anthony List for his strong legislative record supporting pro-life measures:

“All human life is a gift from God. I’ve worked with my colleagues in the Senate on numerous bills to limit abortions and protect innocent lives, both the very young and the very old. While there is still more work to be done, I thank the Susan B. Anthony List for their continued advocacy on this important issue.”

The Susan B. Anthony List National Pro-Life Scorecard can be found HERE.

“It’s more important than ever for school districts in South Dakota that participate in the Impact Aid Program to have the funding stability and certainty they need for the upcoming school year,” said Thune. “That’s why I’m pleased to announce that this critical legislation is now law, and it will be extremely beneficial to school districts across South Dakota and the nation.”

The Impact Aid Program reimburses federally impacted schools – schools that are either located on federal property or have students living on federal property – that often collect less in local property taxes. Last Congress, Thune and Smith introduced the Impact Aid Coronavirus Relief Act, a related bill that President Trump signed into law on December 4, 2020, that ensured schools didn’t need to go through the burdensome process of recalculating federally connected students in the midst of the COVID-19 pandemic.