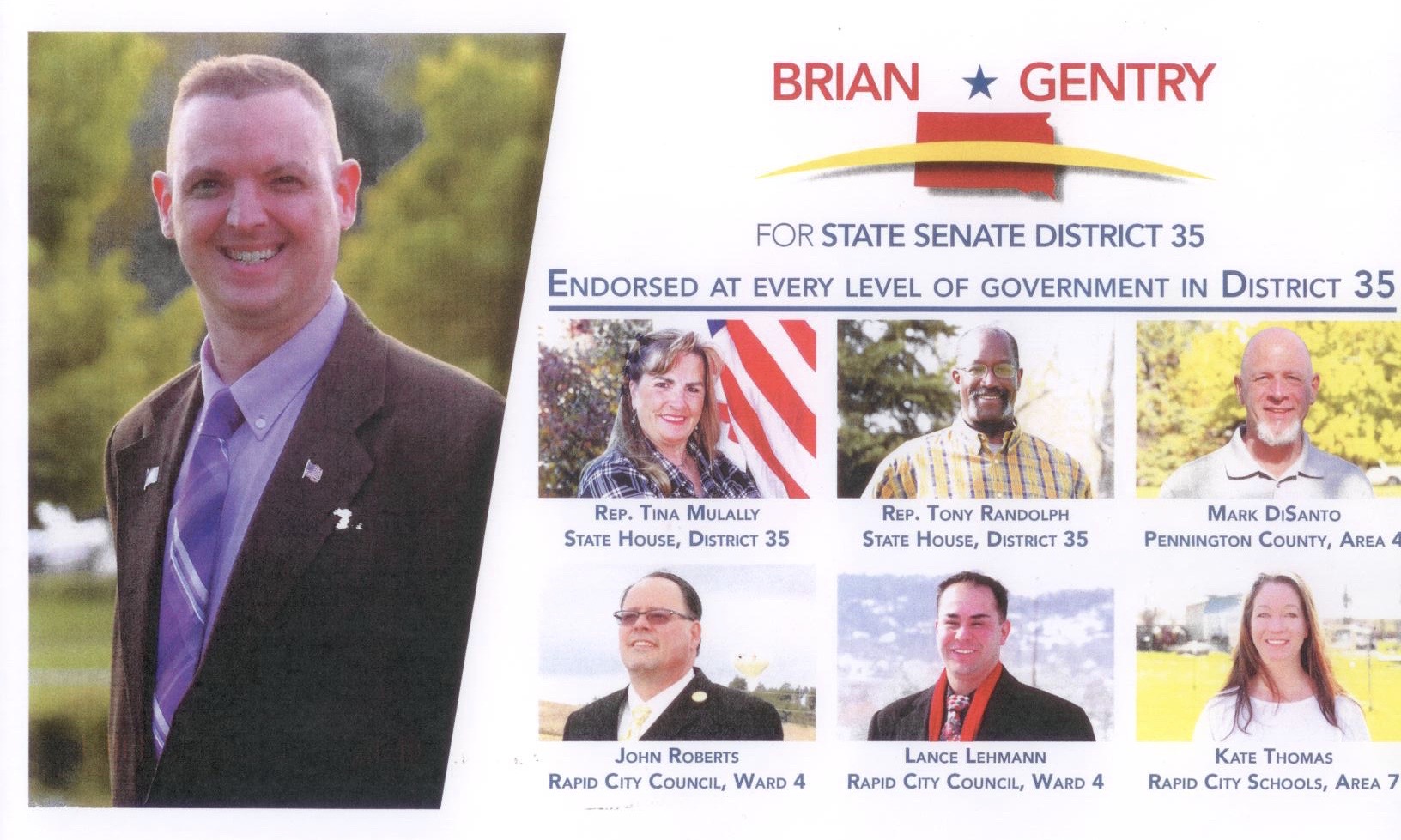 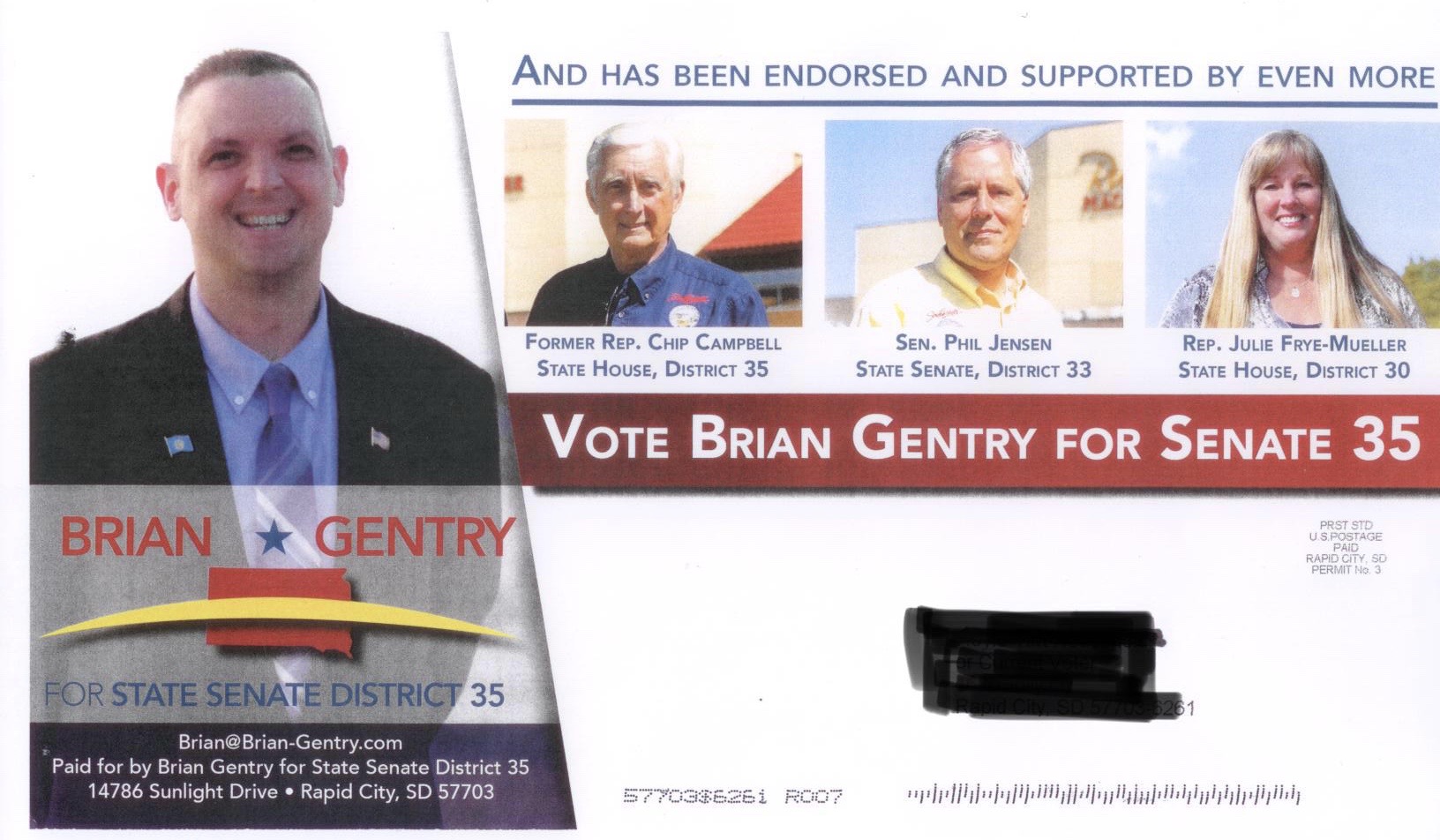 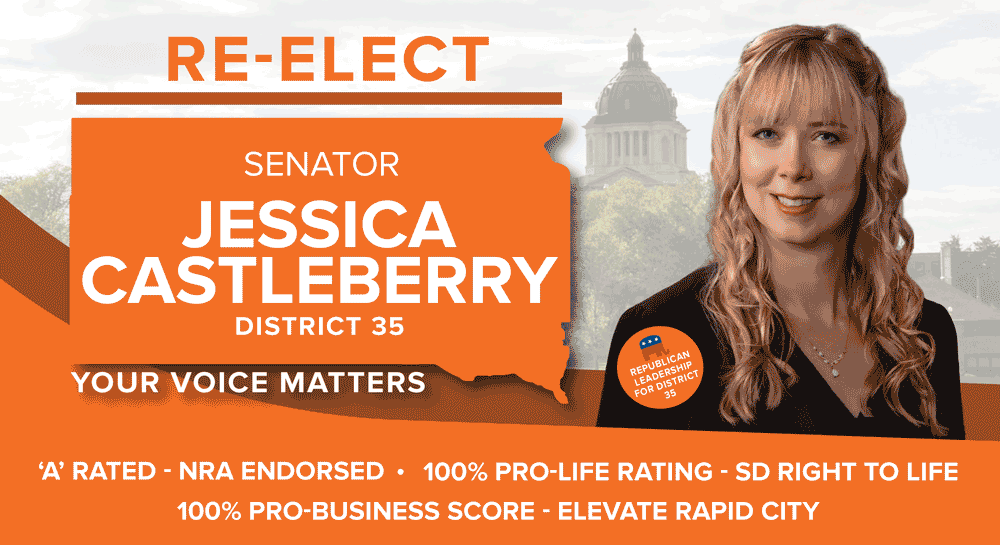 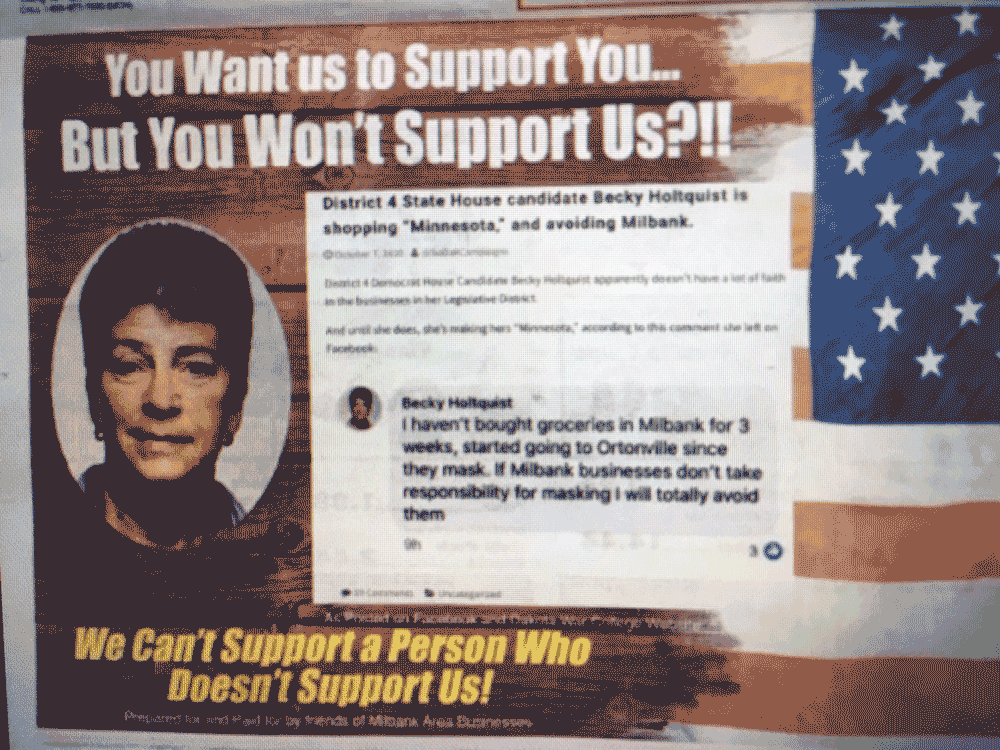 You don’t see this everyday from a state legislative candidate. But, it has kind of become expected from District 7 Democrat House candidate Louise Snodgrass:

I don’t think many other candidates are encouraging people to get out to vote by dancing to W.A.P. (link NSFW, btw). As I noted to the Sioux Falls candidate who pointed it out to me, she’s done nutty stuff before, but I think she’s outdone herself here.

US Senate Candidate Dan Ahlers appears to be tardy on turning in his FEC report that was due yesterday, and providing “a lot of non-disclosure” on what he’s raised and spent during the third quarter of fundraising.

Considering he hasn’t been able to crack 25k in receipts raised in a reporting period, he might be keeping it under wraps because he know it might mean the end of his campaign.

But still, financial disclosure is good for open government.

From the Mitchell Daily Republic, sad news regarding former Republican state legislator Lance Carson, who passed away from COVID on Wednesday:

Carson was elected to the South Dakota House of Representatives in 2007 and served for eight years. He represented District 20, which covers Jerauld, Davison and Aurora counties.

“If you knew his history, he had his first heart attack in his 30s. He served in Vietnam,” Rozum said. “He’s gone through a lot, he would be the last guy you’d ever want to get COVID because of all the underlying issues at the time.”

Carson had health battles throughout his life, showing a continued toughness that his peers admired. He had multiple heart attacks, including that first one at age 38, and in later years wore a heart pump around his waist. He missed time in legislative sessions, dealing with a blood infection in 2013, and in 2017, Carson beat influenza and pneumonia illnesses, including a period where he said he was on life support and lost 25 pounds.

Suffice it to say that Mike Rounds for US Senate had a good fundraising quarter. (If you can’t see the report yet, scribd is being a little funky this AM)

Over two million versus the fact that his opponent Dan Ahlers has yet to file his report.. I’m betting it’s not going to me anywhere near as strong. 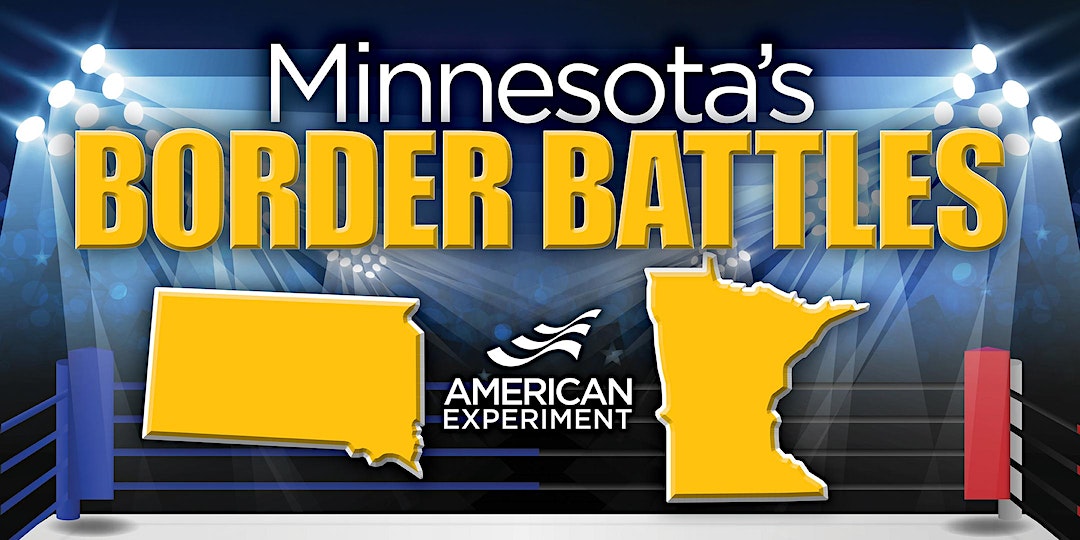 Ever wonder how Minnesota compares to South Dakota in terms of state policy driving the economy? Center of the American Experiment and economist John Phelan will be in Sioux Falls at the Hilton Garden Inn Sioux Falls (Downtown) on October 23rd for a conversation on how state policy can determine who comes out ahead.

In the program, Phelan, an economist at Center of the American Experiment compares the economic performances of neighboring counties on either side of the Minnesota border. John will share his findings on Minnesota and South Dakota, and discuss the insight it gives us into the economic impacts of state policies.

Your ticket includes lunch, a FREE American Experiment wine glass, a copy of John’s just-released report, and a subscription to Thinking Minnesota magazine.

You can register for the lunch event here ($10).

From Facebook, Governor Kristi Noem is one of the many voices who are saying not to put pot in the State Constitution:

From facebook, US Senator John Thune is posting what we all have been noticing as the nomination progresses. Amy Coney Barrett is a remarkable nominee to the US Supreme Court!

We’re less than 3 weeks to go, and the mailbox is an active place for politics in South Dakota.  Here’s a bit of what I’m seeing land across the state:

District 13 candidate Richard Thomason sent out a card with an endorsement from former D13 State Rep Mark Mickelson encouraging people to vote for him. 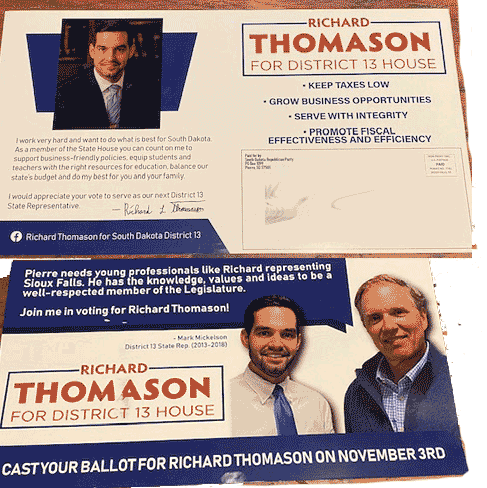 And at the same time, Dusty Johnson made an appearance in mailboxes for Sue Peterson who is also running for one of the D13 seats: 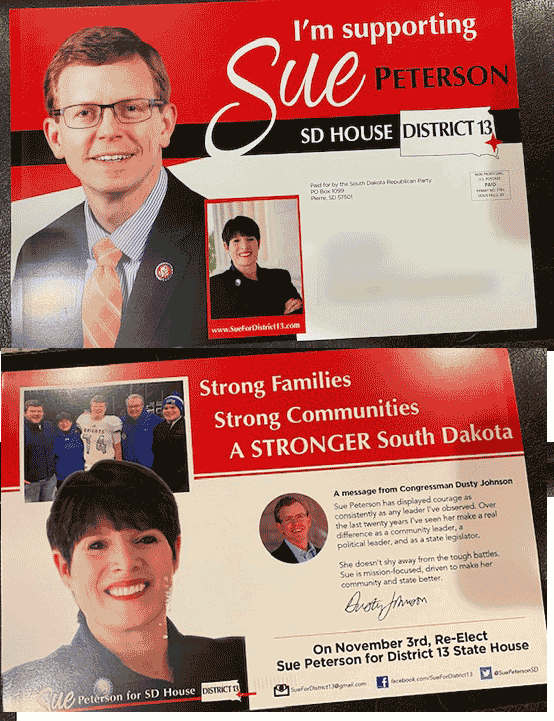 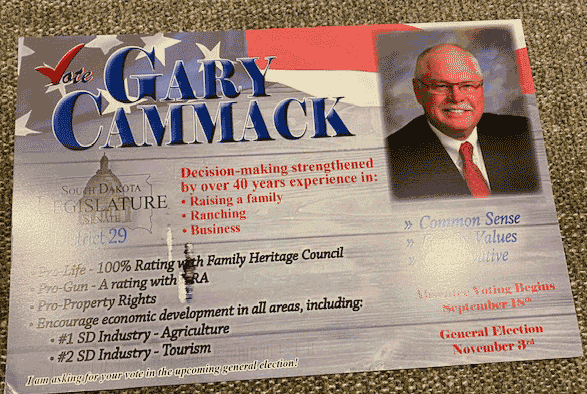 And back in District 13, Democrat Norman Bliss is reminding voters he has a phd.. because he attempted to stuff a dissertation onto his postcard.. or as I would say “words.. words.. words…”.  Honestly, you could cut the bottom 4 inches off the card, because nobody’s going to read that.. 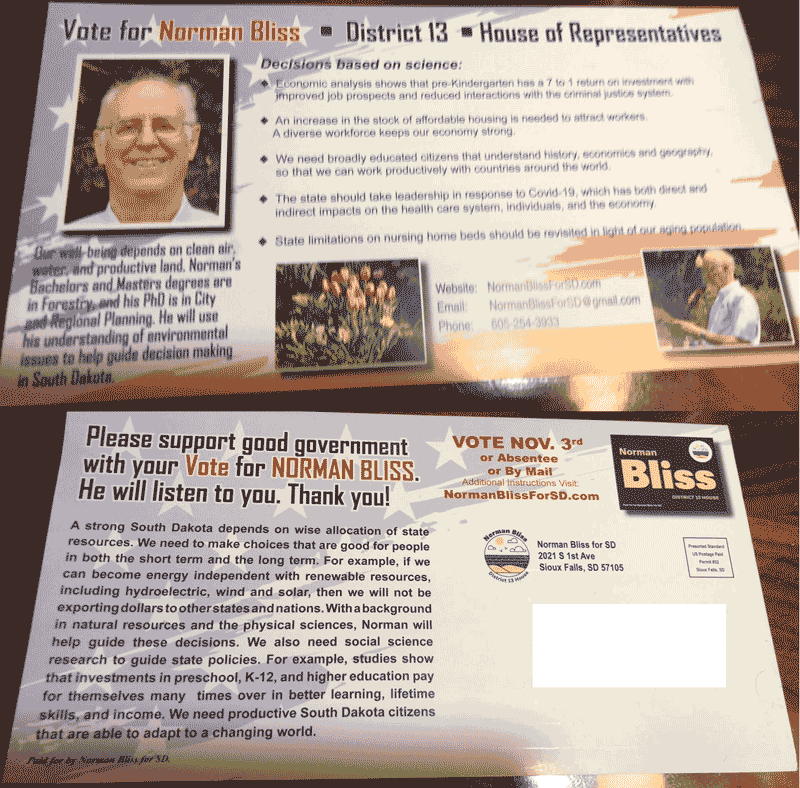 Moving on… and keep those cards coming!